The liftboat Brave Tern and crewboat Atlantic Pioneer during construction of the Block Island Wind Farm in August 2016.

Two new plans for offshore wind power could mark the first time a U.S. electric utility ventures into the Atlantic, and the first wind farm that would be linked to onshore battery storage.

With engineering and development work to start immediately, construction could begin by late 2020, according to Dominion Energy. The two turbines on a 2,135-acre site leased by the Virginia Department of Mines, Minerals and Energy would be a first step toward large-scale development on an adjacent 112,800 acres site leased by Dominion Energy from the Bureau of Ocean Energy Management.

Full development could potentially generate up to 2,000 MWs, enough to power 500,000 homes in Dominion’s Virginia and North Carolina service areas, the company said. It would be the second offshore wind energy project in the nation, and the first owned by an electric utility company.

Dubbed Revolution Wind by Deepwater, the proposal was submitted in response to a Massachusetts request for proposals on new clean-energy sources, and the company also offered alternative bids for a larger 288 MW plan and smaller 96 MW version.

Deepwater won deep political support from Rhode Island for its pioneering project, and wind energy skeptics point to the state’s big rate subsidy that made the project happen. In Massachusetts, Deepwater and its CEO Jeff Grybowski are going up against other green power generators like solar and hydropower, and must show their proposal is competitive.

“Revolution Wind is flexible and scalable. That’s a serious advantage of offshore wind — we can build to the exact size utilities need,” Grybowski said in announcing the bid. “We can build a larger project if other New England states want to participate now or we can start smaller to fit into the region’s near-term energy gaps. And our pricing at any size will be very competitive with the alternatives.”

Deepwater offers another incentive: basing its operations in New Bedford, Mass. The storied fishing port has suffered for years from declining catch limits on cod and other species, and city and state officials had hoped the port could become a base for the long-stalled Cape Wind energy project proposed for Nantucket Sound.

Deepwater and other offshore developers still face resistance from commercial fishermen, but with the federal leases over the horizon and out of sight from land there is not the huge opposition and court challenges that Cape Wind encountered. Deepwater says it will locate final turbine assembly and staging operations at the New Bedford Marine Commerce Terminal, and have its long-term operations and maintenance center for the Revolution project in the city.

With battery storage on shore, Deepwater says it can “help to defer the need to construct costly new peaking generating facilities and controversial transmission lines.” At 144 MW the project could be built during 2022 in a single construction season, lead the way toward larger projects, and help develop and mature a regional supply chain, the company says.

That prospect of new jobs and business opportunities was a driver in Rhode Island support — where Deepwater bases operations out of a Narragansett Bay terminal, and the first U.S-flag wind farm crew boat was built by Blount Boats in Warren, R.I.

Mid-Atlantic states are looking for the same.

“Today marks the first step in what I expect to be the deployment of hundreds of wind turbines off Virginia’s coast that will further diversify our energy production portfolio, create thousands of jobs, and reduce carbon emissions in the Commonwealth,” Virginia Gov. Terry McAuliffe said when Dominion Energy announced its plan. “Hampton Roads has the ideal port assets and talented workforce to attract and house the offshore wind business supply chain to support not only Virginia’s commercial wind area, but also wind farms under development in Massachusetts, New York, and Maryland.”

Maryland too is hoping to grow a supply industry and jobs out of plans by Deepwater and U.S. Wind to develop federal leases there, and base there construction and operations out of Baltimore.

One wild card: the Trump administration.

President Trump has criticized wind power, and tangled with the government of Scotland over an offshore turbine project that would be visible from one of his golf courses. But the administration has yet to make an overt move against offshore wind project permitting, and developers like Deepwater and DONG are looking at construction timelines that would not start until after a first Trump term.

With deep-red states like Texas and Iowa already invested in wind power, its jobs, and the revenue it brings to farmers and landowners, the industry may get more support in Congress.

One bipartisan bill, introduced by Sen. Tom Carver, D-Del., and Sen. Susan Collins, R-Maine, would extend a 30% federal investment tax credit for offshore turbine projects that currently will expire at the end of 2019. That could boost the long-term prospects for developing large-scale wind farms from Massachusetts to Virginia in the 2020s.

But seriously, it’s a new market in North America, why do you care who builds it up? If it becomes a viable market, the vessels and workers will become local.

why do you care who builds it up?

Because that’s even more jobs out the window and as the industry matures there will be pushback against building suitable vessels here that have a majority of the crew from the US.

That’s one example of what the Jones Act is supposed to help us with, but you see how well that went in the US Gulf of Mexico. A certain segment down there of course is US flagged and crewed, but other segments are nearly devoid of US flagged vessels.

Because that’s even more jobs out the window and as the industry matures there will be pushback against building suitable vessels here that have a majority of the crew from the US.

Then you need to step up your game. Offshore wind is big in Europe, and we will corner the market if you don’t claim your share now.

Where can Americans get jobs in Europe to learn the offshore wind business?

Excellent question. If I ever figure it out for myself I’ll let you know.

Right now I look over more Euro focused recruiting web sites than US sites. No jobs yet, although here are at least a few recruiters kind enough to actually send me a response to a cold call email and resume. If I see something that gets a half decent salary that’s willing to hire a non EU and non Ukrainian I’ll give it a shot to get the experience.

Nothing against Ukrainian or even Europe. It’s just that in some parts the nationality restrictions are stricter than in the US.

Esbjerg is a major hub:

I see the same. There are jobs available in Europe on nice newer vessels, but with lower pay. However, they will not hire Americans.

Then you need to step up your game. Offshore wind is big in Europe, and we will corner the market if you don’t claim your share now.

what is needed is for the permitting for these new wind fields to demand that only US built, flagged and manned vessels be used to install them. This calls for strong and vociferous lobbying by vessel owners, shipbuilders and marine unions that such language be added. either that or a high tax levied on the foreign operators to these vessels if they are going to be allowed to bring their ships to the US to work. So high that to reflag to US is a more cost effective option for them.

what is needed is for the permitting for these new wind fields to demand that only US built, flagged and manned vessels be used to install them.

Then you are not going to get any offshore wind fields, it’s expensive and cannot compete with cheaper coal or gas if you are going to put such obstructions in its way.

Offshore wind is subsidized in Europe and we are seeing the result now. The offshore wind farms and the wind mills are getting so large that they can compete with other energy sources. But to get there you need a industry that do not exist in North America.

Only US flagged, built and crewed vessels should be allowed in this new Jones Act wind trade. The windmills should mostly be built here too. It takes several years to get the environmental permits for these wind projects. That gives them plenty of time to build vessels.

Not to mention that none of these wind projects would ever be built in the US without taxpayer provided government subsidies, and huge tax breaks for the utilities. Wind is not an economic source of electricity without subsidies and tax breaks.

If we American taxpayers are going to pay for another government corporate welfare program. It should be a program that benefits Americans, not European industry and their foreign workers.

Blount built the Euro-design crewboat that they are using in Rhode Island. There are plenty of US shipyards without much work at present that could easily build those Euro-design self-propelled jack up barges.

Although only a handful of ruling requests have been submitted to the US Government to date expressly on offshore wind, they confirm that driving of piles and the assembly of the tower components offshore can be done with a stationary foreign-flagged vessel. However, once anything is temporarily or permanently attached to the US OCS, then anything brought to that point from a US port (such as the pedestal, nacelle, blades and other components) would have to be brought to the construction site by qualified US-flagged vessels.

How will the Jones act deal with Hywind?

Obstructions in the US are bad, but subsidies in Europe are ok?

Subsidies are a thing of the past, they served to kick start a world leading industry.

So obstructions such as more stringent Jones Act requirements and/or subsidies to help us get that “kick start” things here.

Don’t bother mentioning mistakes of the past that got us here, just learn from them and deal with what we have now.

Obstructions in the US are bad, but subsidies in Europe are ok?

How are they comparable?

Either one can be used to give competitive advantages and help “kick start” things to get a new (New to the US) industry with the required expertise available here so they can then compete later on an even playing field.

Almost every country does this to some extent in many industries world-wide.

Trump is the key to the USA situation: 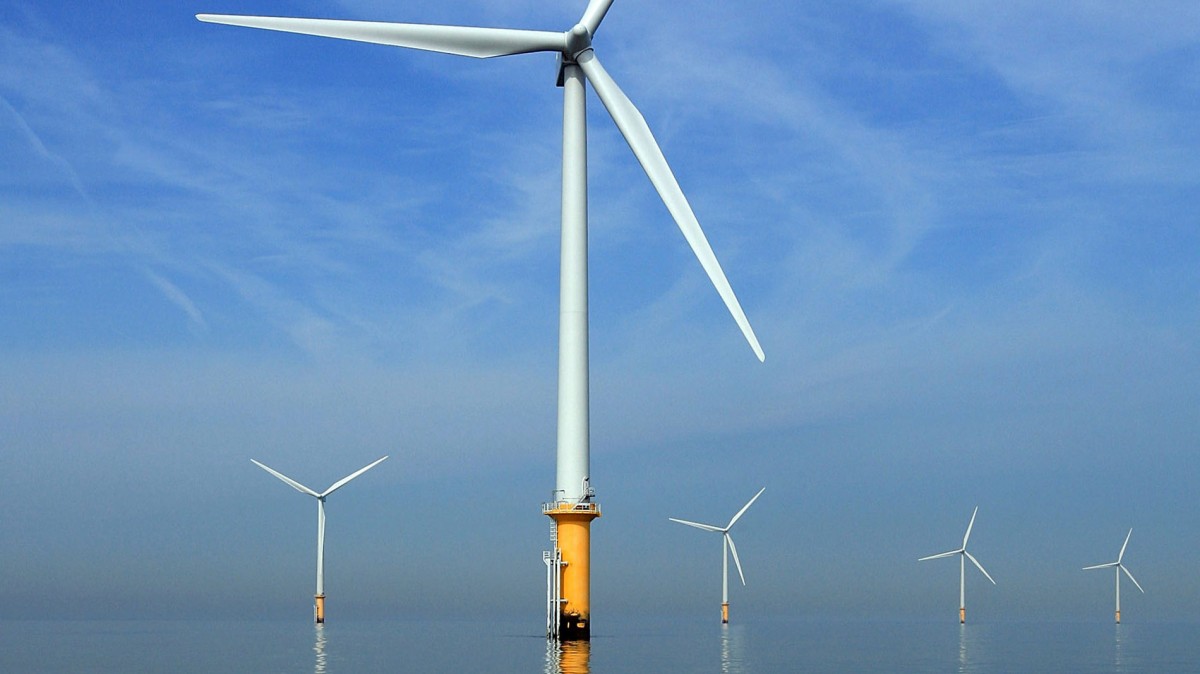 Trump once railed against offshore wind but is now embracing it

The Trump administration suddenly seems eager to welcome firms that want to build wind farms off the East Coast of the U.S.

You are removing environmental rules around coal and have close to no rules concerning fracking. How is Offshore wind going to compete with dirty energy and having the Jones Act dragging it down like a anchor?

Stop it! You are not supposed to notice that. Go work on your latest acquisition and leave industry alone to screw us.