The fisherman in me suddenly sees opportunity

but who on the planet wants to eat Colossal squids? Bet the Japanese will pay through the nose for them!

The landing of a colossal squid by New Zealand fishermen earlier this year offered a rare glimpse into the mysterious world deep beneath the waves. Scientist Mark Norman uses this week’s Green Room to argue that it also shows how marine life is being destroyed before it is understood. 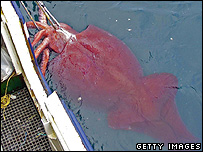 In the era of super science, nothing shows up how little we know of our own planet as finding massive “sea monsters”.

The largest single invertebrate animal ever found was recently captured by longline fishermen in Antarctic seas. Known as a colossal squid, it weighed 450kg (990lb), about twice the weight of the largest squid previously captured.

This event highlights two points; firstly, that our knowledge of the most common habitat on our planet - the deep sea - is still in its infancy, and secondly that such scientific discoveries indicate the scale and reach of global fisheries exploitation.

This squid is a very impressive animal. It has eyes larger than a blue whale’s, a sharp slicing beak as big as a rockmelon and a tongue covered in sharp teeth.

Its eight arms and two longer feeding tentacles are armed with toothed suckers and sharp hooks.

It swims with muscular fins and a big funnel for jet propulsion, and the undersides of its eyes have rows of lights like truck running lights.

It is only the fourth non-juvenile of this squid species ever examined by scientists, yet colossal squid are considered the most abundant Antarctic squid by weight.

Their beaks have frequently been found in toothed whale stomachs and juveniles are regularly captured in trawls but nothing is known about the creatures’ behaviour in the wild.

Exploitation of the seas

Unfortunately, I cannot see this as a highpoint of scientific discovery drawn from the distant reaches of our wild oceans.

Accidentally caught on a commercial fishing line, it is instead a symptom of the massive, and largely unnoticed, overexploitation of our deep seas.

Part of me marvelled at the pictures in the newspapers of this wonderful sea monster, but a larger part of me saw it as yet another casualty of our short-sighted wanton plundering of the deep ocean

This squid was captured on deep-sea longlines, which are baited and barbed fishing lures attached to kilometres of monofilament line, set as deep as 2km down to catch Patagonian and Antarctic toothfish.

Often marketed as Chilean sea bass or mero, commercial quantities of this fish were only discovered in the early 1980’s. Since then, huge harvests throughout the Southern Ocean have lead to a massive collapse of stocks.

For more than a decade, conservation groups have been trying to get protection for such deep-sea fishes. Illegal harvests account for more than half of these catches.

One illegal ship seized off Heard Island in the southern Indian Ocean last year had more than $2m dollars (£1m) worth of toothfish in its freezers.

Throughout the world, longlining for fish has come at a high cost. Not only the fish themselves but also the countless albatross, other seabirds and marine mammals, attracted to and drowned on these baited lines.

Recent initiatives in some regions are reducing these casualties, but only for the legal fisheries.

Much of our knowledge of the world’s next largest invertebrate, the giant squid, comes from similarly destructive fisheries.

Through the late 1980s and 1990s, the frenzy to trawl lucrative stocks of orange roughy (marketed as deep-sea perch) off the tops of seamounts also caught giant squid.

Fisheries scientists soon realised however that such hauls were to be short-lived. Orange roughy were found to live for 150 years and take several decades to reach reproductive age.

Because trawlers targeted large breeding aggregations, adult orange roughy yet to breed were removed from the system. As a result, stocks around the world collapsed.

At the peak of this frenzy, giant squid specimens incidentally caught in these trawls came in thick and fast from the fishery hotspots: South Africa, Australia and New Zealand.

In New Zealand alone, more than 30 giant squid were caught during the 80s and 90s - more than the world total for the previous 150 years. Both the fisheries and the flow of giant squid specimens subsequently dived.

This strip-mining of the deep ocean has gone largely unnoticed, aided by consumers who really don’t want to know that their Chilean sea bass, sea perch or trevalla have come courtesy of the clearance of deep-sea coral forests or drowned albatrosses.

Shoppers may also rather not know that their tasty dish may have been swimming around before the American Civil War.

So when the capture of the colossal squid came to light, part of me marvelled at the pictures in the newspapers of this wonderful sea monster, but a larger part of me saw it as yet another casualty of our short-sighted wanton plundering of the deep ocean.

of course, the ORCA is much too puny to go after these beheamoths…I’M GONNA NEED A BIGGER BOAT!

Interesting…after reading this, I can’t remember the last time I saw orange roughy in the market.

I wonder if those giant squids eat as good as the smaller ones? I do prefer the gumdrop size to the humbolt size.

I wonder if those giant squids eat as good as the smaller ones? I do prefer the gumdrop size to the humbolt size.