I’m in Tampa for the holidays with family and I see two former OSG tankers in port. It looks like they have new names but I can’t see from far away but one stack is bright safety yellow though. Are these the same ships or different? I haven’t read anything in the news about this. Is this OSG rebranding because of another bankruptcy? My brother said he’s seen these ships here for a few weeks.

Three of the Veteran class tankers formerly leased and operated by OSG were returned and re-leased to Keystone Shipping. Keystone has yellow stacks as shown below: 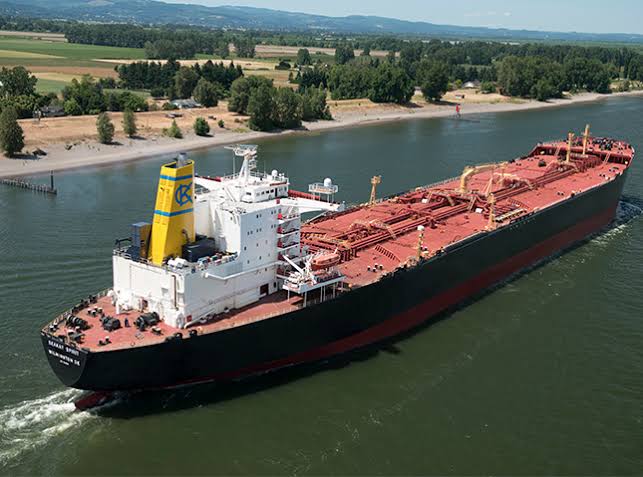 I haven’t read anything in the news about this.

This thread has a little background:

Guess declining the option to renew the leases back in December wasn’t just a negotiating tactic by OSG. OSG declined to renew three ships, two to Keystone apparently, any rumors on where the third is headed? (@argonbeam)

One is the Texas City and one is the New York. Keystone is now operating them, I assume under new names.

The geniuses in the OSG office fucked up yet again. Maybe once the mates get rid of all the boomers they will vote to improve their quality of life greatly, too.

I hate to tell you, but the mates are never going to sign pledge cards.

I can think of no reason for them ever to. The mates get all the benefits of the MEBA contract without any of the bullshit.

I can think of no reason for them ever to. The mates get all the benefits of the MEBA contract without any of the bullshit.

What bullshit? And what about having full benefits/pension and another job to go to same or higher pay when laid off due to layup? I talked to a mate or two that had to go work as an AB on tugs cause OSG be like gee thanks, you’re laid off.

The mates wouldn’t make what they do now if not for MEBA, and the MEBA OSG contract sucks compared to other companies (which is why OSG can’t fill slots, especially 1ae). Cause who doesn’t enjoy 13hr days lmfao

The LA is also there. The new names are:

I guess nobody at Keystone knows the history of that name. Pretty disrespectful.

Yes, the mates signed pledge cards a few years ago and were warmly received…

Were you there when MEBA took 12% from the engineers to fluff up the pension fund? I’d rather take OSGs 401k contribution and invest it than hope that anybody’s pension plan is going to be good in 25 years when I need it. And the company contribution is very good.

Where are the mates going to go? What other mate jobs are there in MEBA outside of a few container jobs? Certainly not enough to absorb 12 ships of mates and everybody go find a new job. And who’s going to take the tanker jobs over? It’s not like MEBA has 30 mates in waiting with PICs.

And you’re right, the mates wouldn’t make what they do now without MEBAs involvement, but they’re also making what they make right now without having to join MEBA. So why bother?

Were you there when MEBA took 12% from the engineers to fluff up the pension fund? I’d rather take OSGs 401k contribution and invest it than hope that anybody’s pension plan is going to be good in 25 years when I need it.

Yes, that 12% was undoubtedly a bitter pill to take. The choice had to be made to either maintain a defined benefit pension, or switch to the defined contribution (401k) model. The membership opted for the former. Currently when one retires from the MEBA, he or she receives monies from their defined benefit pension. Their MPB (basically employer funded 401k) and the 401k they may have elected to fund is rolled into an IRA.

I was on the OSG tankers when they laid 7 tankers end of 2020 early 2021. I’m actually typing from the ECR on one now. We had 3M laid off (fired) 2Ms bumped down and a few CMs bumped down. I am not pushing to get the mates to pledge, I could care less however, When I want off the ship. I get off. When I want to stay home for a trip or two, or five and keep my permanent job, I do. They want me on another ship, I can tell them no. There are plenty of reasons to join and not having the company jerk you around is one of them. When OSG tells the mates to jump they jump. We don’t even have to answer the phone and we’ll still have the spot on the ship.

That’s all great for a union that has a plethora of engineering jobs. I still don’t know what you think all of those mates who got fired were going to jump on in MEBA? Do you know exactly how many mates jobs MEBA has?

Do you know exactly how many mates jobs MEBA has?

Well, it just added 3 more ships worth of jobs to the list. There are more MEBA mate jobs than most people realize. And there are often pass-through MM&P jobs too. And think, if OSG mates joined MEBA, there would now be many many more mate jobs. But yeah, keep kissing the company’s ass.

Any of the mates that sail those ships will join MEBA or they won’t get hired. The OSG mates who were on those vessels before they were redelivered will have a choice not to, but how long do you think that going to last?

I was told by one of them that they have 90 days to join. They’re being given group 2 with the initiation fee waived.

That’s for a Capt position. Not sure if the same deal extends to the other mates.

I understand that. But I believe that MEBA will have a hard time getting the rest of the fleet to join.

What is the current MEBA pension for a recently retired MEBA chief engineer after 30 years of sailing on average?

That’s Bullshit. There are enough giveaways going on. Now MEBA is in on it?

What Fleet, OSG? That’s not going to happen. The younger guyys may but not many CMs will. Why would they give up 2% of their base and 6% of theior vacation?