A tanker and a bulker have collided in the East China Sea, off Shanghai:


Not much details yet, but all 32 crew on the Iranian owned and operated tanker appears to be missing.
Not much help from AIS either.

The Sanchi seen ablaze from bow to stern:


She was fully loaded with light crude from Kharg Island at time of collision.

PS> Both CNA and Bloomberg report that the caro was Condensate, not Crude Oil. 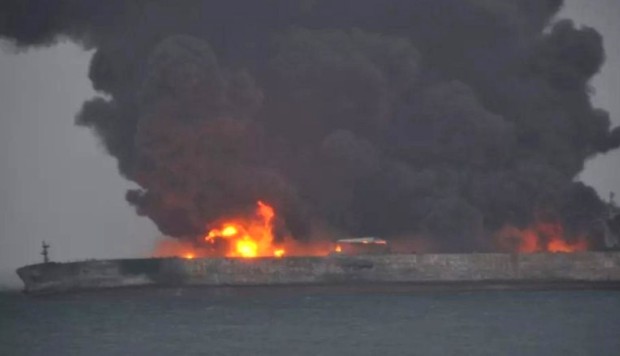 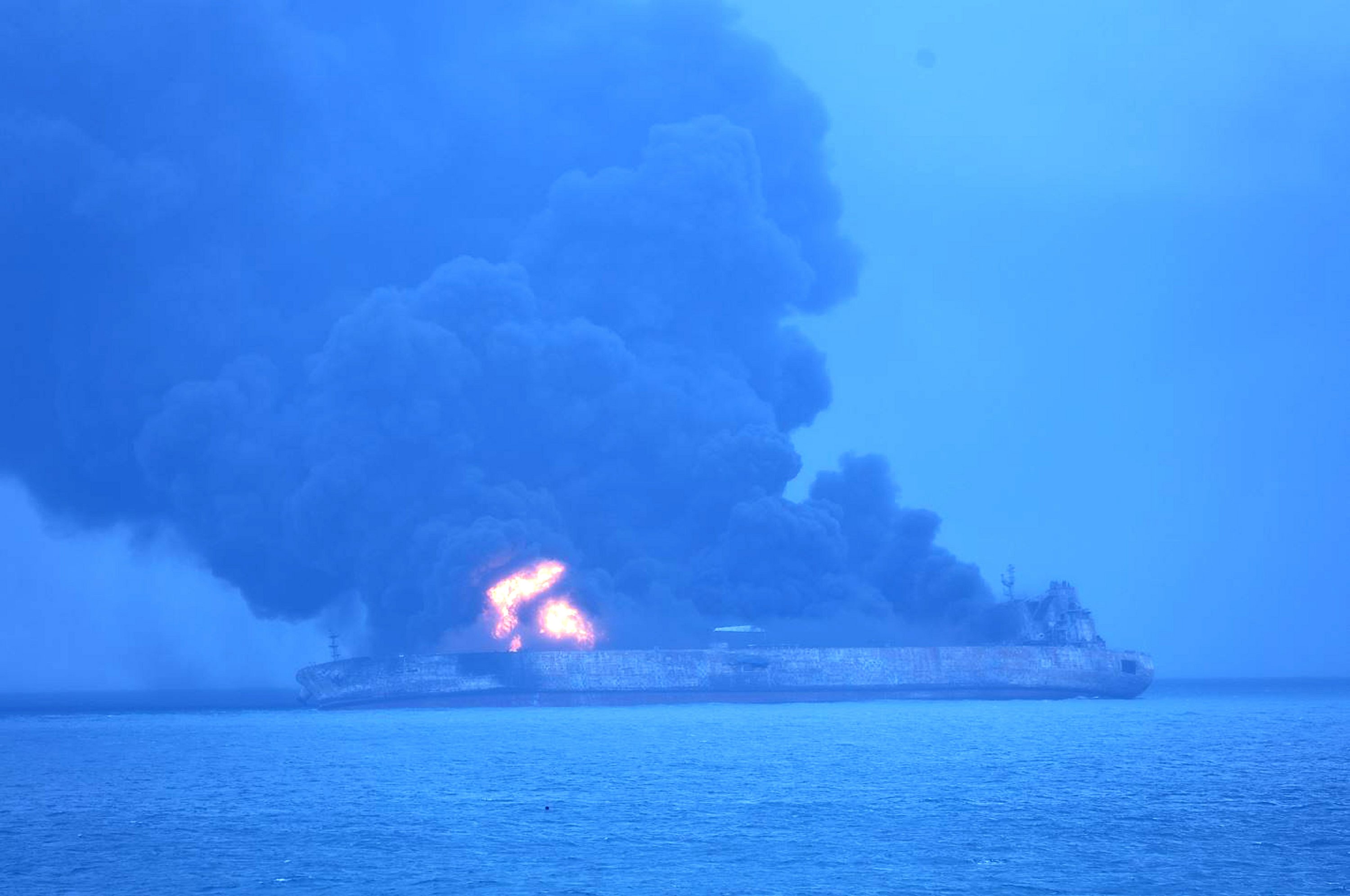 32 missing, oil tanker on fire after collision off China

BEIJING (AP) — An Iranian oil tanker collided with a bulk freighter and caught fire off China's east coast, leaving the tanker's entire crew of 32 missing and causing it to spill oil into the sea, authorities said Sunday. Chinese authorities...

Condensate is a light crude oil , typical API between 45 to 75. I am hoping for some good news about the crew. I have 4 questions: 1) assuming double hull, why was the collision so devastating? 2) assuming cargo was inerted, why did all the tanks explode, as appears from photos? 3) Why could the crew not escape? It makes me think that the fire/explosion must have been devastating 4) How well are Iranian ships inspected and crews trained? But mainly, for now the crew must be in our thoughts.

The state of the tanker will be open to scrutiny.

Due to sanctions much or all of NITC’s fleet was laid up or used as floating storage off Bandar e Pars / Asalouyeh. After sanctions were eased the fleet got reactivated but had to be re classed and re-covered regarding P & I.

As they are flag state owned they will probably have avoided closer managerial inspection, and skills are lost after years swinging on the hook.

This is not the first such incident:

A large container ship has collided with an Iranian supertanker in the busy Singapore Strait, causing damage to both vessels but no injuries or oil pollution.

The two collisions are VERY different.
One happened in open seas with plenty of searoom and between two ships on near opposite headings.
How two ships meeting on near opposite courses can manage to collide is going to take some explanation though.

The other was a “classical” Singapore Strait collision, with the tanker Dream II coming out from Western Anchorage and presumably joining the Eastbound lane, while the Container ship was in the Westbound lane:
http://gcaptain.com/vlcc-collides-with-giant-msc-boxship-in-singapore-strait/

It is hard to understand the way these ships maneuvered. (Looks like they are playing “cat & mouse”, rather than trying to avoid collision)

It is hard to understand the way these ships maneuvered. (Looks like they are playing “cat & mouse”, rather than trying to avoid collision)

Might be what Capt Trimmer calls the “dance of death”. One ships comes right the other left then the reverse till they run out of room.

In addition to the missing crew, this is also a huge environmental disaster. “Fortunately” it’s light condensate and not heavy crude oil.

assuming double hull, why was the collision so devastating?

Double hull does not protect from high-energy collisions.

Double hull does not protect from high-energy collisions.

Also as the tanker was loaded the ballast tanks would have been empty, AIS gives the bulker draught at 12.8m so loaded. Once the hill was punctured very little to stop damage to the double hull.

"A SEARCH continued on Monday for the crew of a damaged Iranian tanker still at risk of an explosion that could sink it following a collision at the weekend with a bulk carrier.

The 164,154 dwt Panama-flagged Sanchi was carrying 136,000 tonnes of fuel to South Korea when it came into collision with the Hong Kong-flagged 75,725 dwt CF Crystal bulk carrier carrying 64,000 tonnes from the US off Shanghai on Saturday night. The bulk carrier had been heading to Guangdong province.

In a statement, the Shanghai Maritime Safety Administration said the search and rescue operation was ongoing. Iran’s Ports & Maritime Organisation said a body had been found.

The crew comprised 30 Iranians and two Bangladeshis, according to Lloyd’s List Intelligence.

Meanwhile, the Korean Coast Guard has also sent a vessel to help with the rescue work, according to SMSA.

The administration added that the collision had resulted in an explosion on Sanchi’s hull as well as an oil spill near by, resulting in a massive fire that forced the vessel to list to starboard.

Experts from the rescue group said there was the possibility that the entire tanker vessel could explode and sink. They also warned that the toxic gas emitted by the fire could result in serious injuries for rescue workers.

PMO managing director Mohammad Rastad said the remains of a crew member had been found and had been transferred to Shanghai port to be identified.

When approached by Lloyd’s List, an HTPC official expected the incident to lead to about $60m in losses on the cargo, which should all be covered by insurance. The official declined to comment further.

SMSA has established a restricted navigation zone, with a 10 nautical-mile radius to prevent further incidents. China’s ministry of transport has set up an emergency working group to oversee the rescue work and investigations.

The other ship, CF Crystal, which sustained only minor damage, has headed to the nearby Luhuashan port under the custody of a rescue vessel.

All 21 crew members of the bulk carrier were rescued.

The US Navy’s 7th Fleet dispatched a P-8A aircraft to help out in the search and rescue efforts, it said in a statement on Sunday.

“After arriving on scene, the aircraft searched an area of approximately 3,600 square nautical miles before returning to Kadena Air Base in Okinawa, Japan. None of the mariners were located,” said the US Navy."

The safest place on a tanker on fire is actually the engine room. In this case the whole deckhouse was apparently destroyed by fire, incl. communication and lifesaving equipment but maybe some crew managed to escape down into the engine room. As the ship is still floating people may still be trapped down below.

maybe some crew managed to escape do down into the engine room. As the ship is still floating people may still be trapped down below

Part of an oil tanker that has been ablaze for days off the coast of Shanghai exploded Wednesday, forcing rescue boats searching for 31 missing sailors to retreat, Chinese authorities said.

Every photo published so far shows the paint burned off from stem to stern and if the machinery spaces got hot enough to burn the paint off down to the waterline the odds of anyone surviving have to be very very slim - nil in my opinion.

With a length of 900 feet (274 meters) and displacing more than 85,000 tons, the Sanchi is almost as big as the US Navy’s Nimitz-class aircraft carriers, according to the ship-tracking site marinetraffic.com.

Quite a small displacement for a 160,000+ DWT Suezmax tanker. Wouldn’t be the first time media mixes GT with displacement…

I really wonder what happened. Does anyone know, if the tanker Sanchi is still floating 11 January 2018? Media seem to have stopped reporting.

it is just another massive conspiracy like 911, the sinking of the ESTONIA or the Apollo program! If the SANCHI had been a coulombi egg design you know this could never have happened but the Illuminati and Rothchilds have prevented the truth from being known by all the unwashed masses!

Did you know JFK was assassinated by Elvis who was really the love child of an alien? Kennedy discovered this through reports from Roswell and Area 51 so he had to be eliminated before the truth was revealed!

of course, they be found just fine in there except for being dead due to smoke inhalation or suffocation.

I assume people on M/T Sanchi is still alive in the engine room.

Well you know what they say about anytime you “assume” or does that not translate into whatever your given language is?

Looks to me from the photos that there isn’t a speck of unscortched paint on the hull plating from stem to stern. God have mercy on their souls.

Well, the engine room is protected by A-60 fire insulation and the part below water is cooled down by seawater, so it is a pretty safe place, if the outside - oil on water (?) - is burning. The paint below water is still there!

It is not the first time an oil tanker is on fire after being hit by another ship in a collision. In the 1980’s we investigated 100’s of tanker collisions to establish the best protection of the environment and the best safety in collisions. My alternative to double hull - the Coulombi Egg oil tanker design - was approved by 100% of IMO’s members September 1997 to fulfill Marpol requirements.

Hopefully the fire will be extinguished … and then we can check the engine room. When roro-ship M/S Saint Claire was on fire at Marseille port for five days in the late 1980’s the engine room aft was intact. We bought the burnt out wreck and repaired it. It was a very good business.

“A-60” is just a steel bulkhead with enough fire insulation to keep the average surface temperature on the unexposed side below 140° for 60 minutes and prevents the passage of fire and smoke until the end of the one-hour standard fire test. After that you’re on your own. How many days has Sanchi been burning again? Five?

As for good business, was it as good business as that Egyptian ferry project where you acted as the consulting naval architect? Hands up, who would call a late 1960s Italian-built ro-pax ferry with few added decks “very robust and safe” in the 2000s? As they say, one drowned person is a personal tragedy, ten drowned persons are a national tragedy, and more than a thousand is just statistics. I would not be able to sleep with that much blood in my hands…