Stuck Minesweeper to Be Cut Into Pieces

oh this is just wonderful! 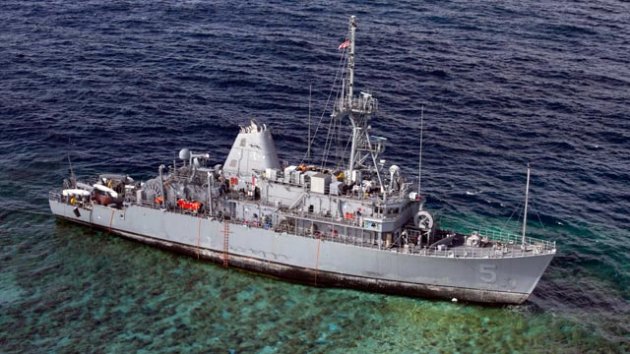 Unable to tow the minesweeper USS Guardian off a reef in the Philippines, the Navy has decided that the only way to free the ship without causing further damage to the reef is to cut the ship into pieces.

That basically means the USS Guardian will no longer exist as a Navy vessel and will be taken off the Navy’s ship roster.

The 23-year-old Avenger class minesweeper USS Guardian ran aground on Tubbataha Reef the night of Jan. 17 as the ship crossed the Sulu Sea. The reef, located about 400 miles south of Manila, is both a Philippines natural park and a UNESCO World Heritage Site. Days after the incident the commander of the Navy’s Seventh Fleet issued an apology to the Philippine government.

In the days since, the Navy was unable to tow the ship off the reef as poor sea conditions complicated the salvage effort. Capt. Darryn James, spokesman for the U.S. Pacific Fleet, told ABC News that the Navy now plans to cut the ship into pieces to get it off the reef. Two heavy lift ship-borne cranes will arrive at the scene by Friday to begin to salvage the ship. The process is expected to take a month.

“The ship is badly damaged,” said James. According to James the team of naval architecture and salvage efforts working to free the minesweeper determined that “after a full review of all possible alternatives, our only viable option is to dismantle the damaged ship and remove it in sections.”

James said the decision “keeps the cranes in deeper water to minimize coral damage.” He added, “We are developing a thoughtful and deliberate plan to safely remove individual sections of the ship without causing the release of harmful materials.”

None of the 79 sailors aboard the ship were injured in the grounding and there has been no seepage of fuel onto the reef. The ship’s crew was transferred to another U.S. vessel and have returned to their homeport of Sasebo, Japan.

The ship’s wooden hull - covered in fiberglass - is punctured and parts of the ship have been flooded. As part of the salvage effort the 15,000 gallons of diesel fuel aboard the Guardian were transferred to a Malaysian tug contracted by the Navy. Other materials that might damage the reef have also been removed including : 671 gallons of lubricating oil; dry food stores; paints and solvents contained in storage lockers; and the crew’s personal effects left behind on the ship.

A preliminary Navy review found that the digital chart the crew was using to navigate the ship incorrectly listed the reef’s location by 8 miles. A review of additional charts created by the National Geospatial-Intelligence Agency found another navigational aberration off the coast of Chile. Both have been corrected.

The Philippine Congress is conducting its own investigation of the ship’s grounding.

According to a Navy fact sheet, the Navy’s 14 Avenger-class ships “are designed as mine sweepers/hunter-killers capable of finding, classifying and destroying moored and bottom mines.” With hulls made of wood and sheathed in fiberglass, the 224-foot-long vessels “use sonar and video systems, cable cutters and a mine detonating device that can be released and detonated by remote control. They are also capable of conventional sweeping measures.”

A number of the vessels have been deployed to the Persian Gulf over the past year to counter any possible Iranian threat to close the Strait of Hormuz with mines.

in case I didn’t mention it before…STOOPID SQUIDS!

They should just pull her off and let her sink in deep water to be come an artificial reef.