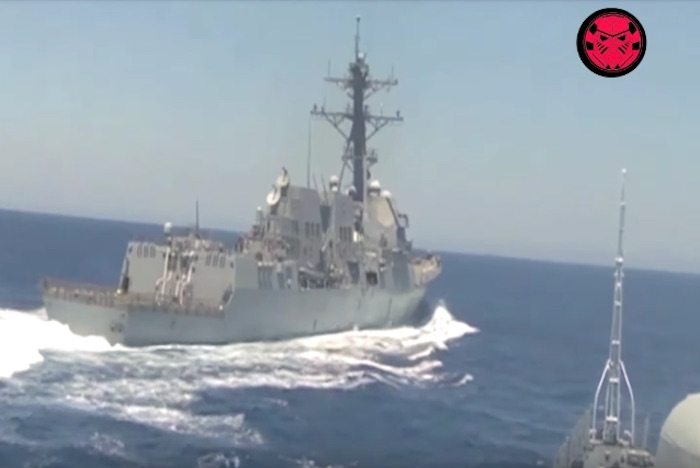 By Andrea Shalal
BERLIN, June 30 (Reuters) – The United States on Wednesday accused Russia of deliberately displaying the wrong naval signals and interfering with a U.S. aircraft carrier in the Mediterranean Sea, in the latest salvo about a June incident that both countries blame on each other.
Captain Danny Hernandez, spokesman for U.S. European Command, said the Russian warship Neustrashimy (FF 777) conducted unsafe and unprofessional maritime maneuvers, which could have led to miscalculation, injury or even death.
A number of Cold War-style incidents have occurred at sea and in the air in recent months, with the militaries of Russia and the United States accusing each other of dangerous actions in international waters and airspace.
“This most recent incident comes on the heels of other unsafe air and naval incidents on the part of the Russian military,” Hernandez said in a statement to Reuters.
He said such action had the potential to unnecessarily escalate tensions between the countries.
In April, the U.S. military said Russian SU-24 bombers simulated attack passes near the USS Donald Cook in the Baltic Sea. 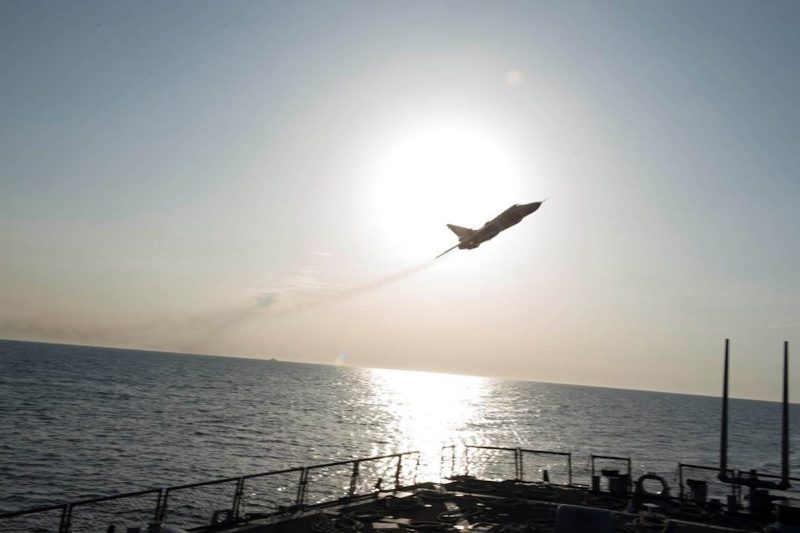 160412-N-ZZ999-007.jpg?resize=800%2C533800×533
A Russian attack aircraft makes a low altitude pass by USS Donald Cook (DDG 75) April 12, 2016. U.S. Navy PhotoRussia and the United States blame each other for unsafe maneuvers in the June 17 incident which occurred less than two weeks after officials from the two countries met in Moscow to discuss ways to avoid incidents at sea.
The Russian Defence Ministry said a U.S. destroyer approached dangerously close to a Russian ship, in what it said was a flagrant U.S. violation of rules to avoid at-sea collisions.
A U.S. official countered that the Russian ship carried out “unsafe and unprofessional” operations near two U.S. ships.
On Wednesday, Hernandez said the Russian ship raised the “ball-diamond-ball” signal on its mast when it was two nautical miles away from the USS Gravely, a U.S. destroyer operating in the Mediterranean with the USS Harry S. Truman aircraft carrier.
That combination of simple geometric shapes is used to indicate that a ship’s ability to maneuver is restricted.
Video of the supposed incident released by the Russian Defence Ministry:

Russia identified its ship as the Russian Navy frigate Yaroslav Mudry.
Hernandez said the Russian ship maneuvered to get closer to the Gravely, changing course and speed as the U.S. ship did, which he said showed it was not in fact restricted in its ability to maneuver, and was thus intentionally displaying a false international signal.
As a result, he said, the U.S. destroyer believed the Russian ship was intentionally trying to interfere with Harry S. Truman operations. (Reporting by Andrea Shalal; Editing by Andrew Hay)
I Copyright Thomson Reuters 2016.
[/I]
The recent video of the Russian fighters buzzing another US Navy ship were pretty damn blatant. If this shit keeps up, it could make the Whale Wars look like a child’s game. I’ve had Iranian gun boats shadow us alongside about 200 feet off and taking pictures of our antennas but nothing like this. This video only shows the US ship passing and getting in front of the Russian. Anyone have any more info on this encounter?

Everyone screws with everyone. It’s been like this forever. The sad part is how USN, State or whoever keeps crying about it publicly as if the ‘big bad Russians are being mean to us!’ Its embarrassing.

[QUOTE=lm1883;186656] Much ado about nothing.[/QUOTE]
It doesn’t preclude the fact that operating at such close proximity at those speeds doesn’t need much of a FUBAR situation on either ship to cause crushed steel, crushed egos and a gargantuan political stink.

[QUOTE=Lee Shore;186661]It doesn’t preclude the fact that operating at such close proximity at those speeds doesn’t need much of a FUBAR situation on either ship to cause crushed steel, crushed egos and a gargantuan political stink.[/QUOTE]

Russian and American submarines used to go “bump” in the night all the time, back during the Cold War (my time).

It wasn’t uncommon to see a sub return to port with some interesting dents and dings.

On our side we do ‘presence’ patrols all the time. Read today’s Navy Times. The article on January’s RCB Farsi Island navigation accident report states the sailors admitted to presence patrols. We crow about our safety-of-navigation patrols and overflights in the South China Seas which are intentionally provocative. Any old timer will tell sea stories about getting a little too close for comfort to ships, planes or boarders. These provocations are completely normal by all sides.

And last I checked a warship wasn’t required to obey international rules of the road by telegraphing it’s maneuvering intentions with signals such as ball-diamond-ball. Deceptive signals and flags are the accepted age old behaviors of warships.

Honestly, I like the Russians. Almost every single one of them that I’ve encountered have been pleasant, proud, quick thinking, insightful, and a helluva good time to drink with. I think this is just a “push” back at us, since we’ve been relishing in the fact that we are the remaining superpower. For years now, we’ve been assuming a tactical posture around the world, to strike from anywhere. We do it as a “show of force”, and I really do believe that we do it with good intentions. Look at our presence in Japan. Just by us being there, we have kept North Korea at bay from invading/sparking off another engagement with the South Koreans. Although not entirely, as there are almost always yearly volleys of indirect fire (mortar fire) being lobbed over the line.

Russia has regained their strength, and I think this is their way of telling us that they are up to the task of handling themselves nowadays. I wish that our leadership worked better with theirs in policing the atrocities of the world, especially around Syria, and coordinating air strikes on ISIS together, instead of independently.

I know the reply is off topic, but I think that these instances are more than just “messing with us”.