PCTC/PCCs and Stabilty at Large Angles of Inclination

What is it about PCTCs that makes them tend to fall over and lie at about the same angle? Modern Express, Hoegh Osaka, Cougar Ace…

The heavy list of the Modern Express was not caused by shifting cargo, by what then is still unexplained as far as I know. The cargo was still stowed as it was by departure, so no cargo shift took place. The manifest said that there was a lot of sawn timber on board but in reality it was illegal tropical wood from Africa. Maybe they were shifting ballast at sea which also caused the list of the Cougar Ace.

Another possibility is the pure loss of stability in waves that can happen if a vessel encounters a single large wave and spends a considerable amount of time on the wave crest. If a large deterioration of stability occurs on the wave crest, the vessel may develop a very large heeling angle or she may even capsize. I think that the flares forward and aft on this type of ship enhances the process. After the partial capsize the vessel could not right itself and found a new equilibrium. Even a broach is thinkable. 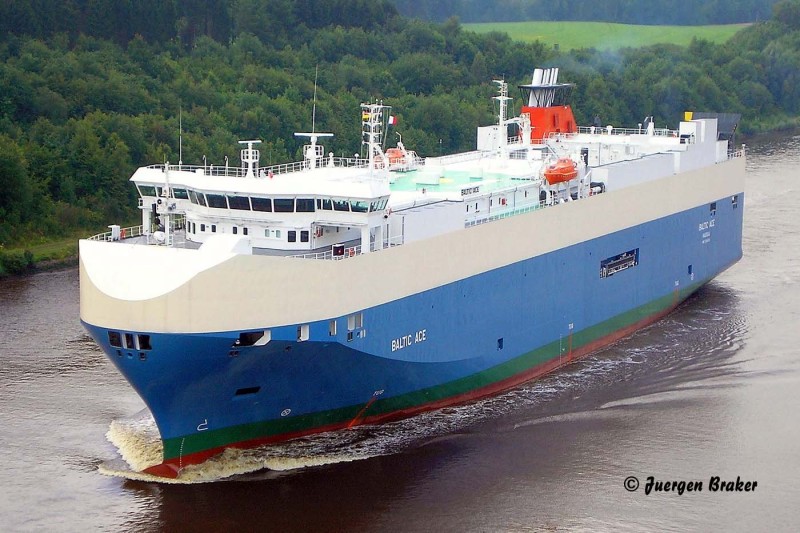 In 2005 off the Dutch coast this autocarrier the Baltic Ace had a collision with a container schip and sank within 15 (!) minutes. Out of the crew of 24 11 perished in the cold North Sea. Not even time to put on the survival suits. I donot call that normal, very abnormal.

A famous Dutch naval architect Vossnack predicted accidents like this with this type of ship to happen, also those of the Herald of Free Enterprise just out of port and the Estonia. He called all ships with large free surface decks without even longitudinal bulkheads ‘floating coffins’…

Photos of ships on the internet with extreme lists get clicks. Why are they always PCTC/PCC? Because box boats don’t heel like that, they go over. 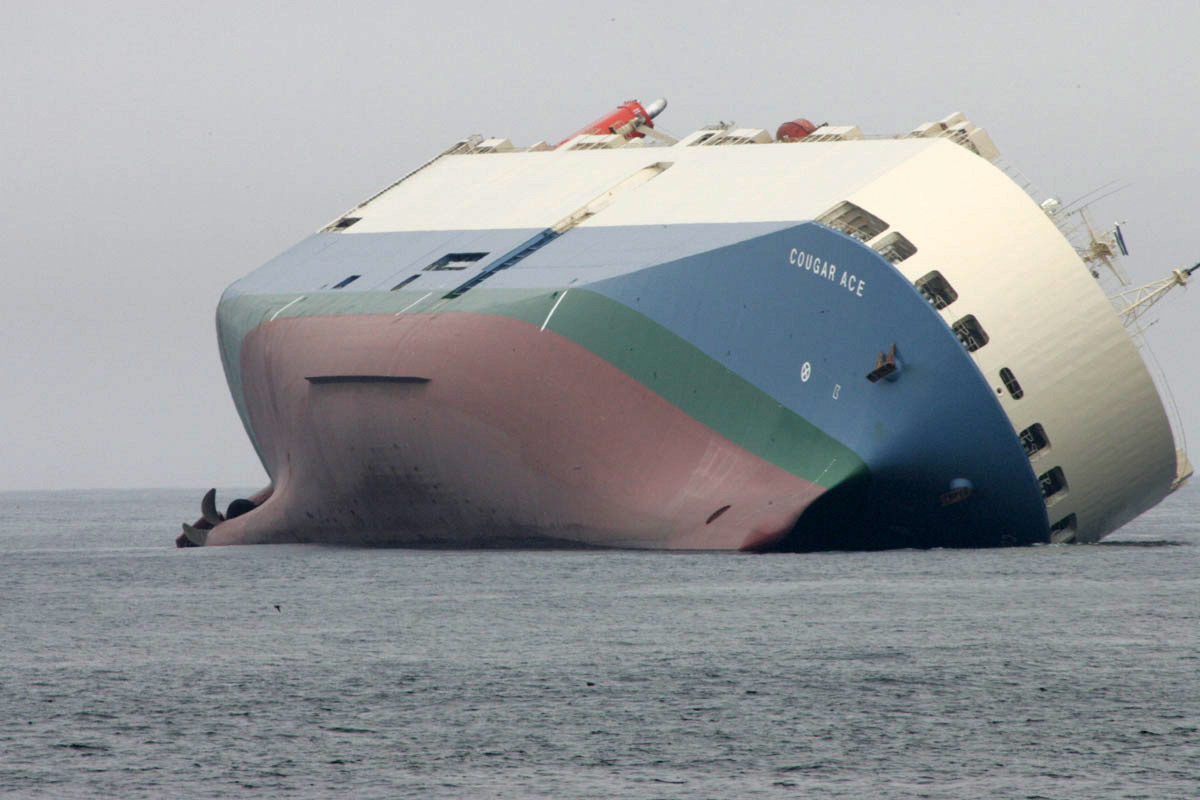 PCTC cargo is volume cargo not weight cargo. In my experience container ships have more stability concerns the PCTC because the boxes are typically stuffed full for economic reasons.

As to why PCTCs float at that angle while container ships will roll over. From La Dage and Gemert:

“Therefore if a ship lists her deck edge under, she will probably capsize immediately” But it goes on to say; “There is an exception: she will capsize unless her range of stability is greater then 90 degrees.”

There is a righting curve for PCTC and container ship at this site, page 18.

Photos of ships on the internet with extreme lists get clicks 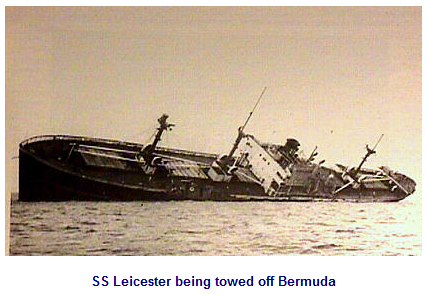 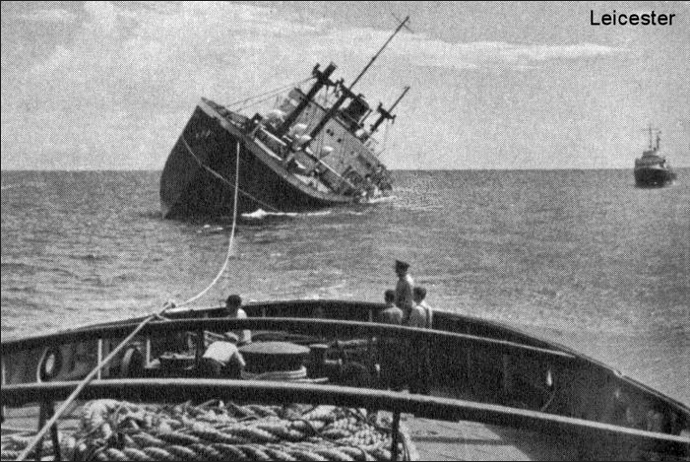 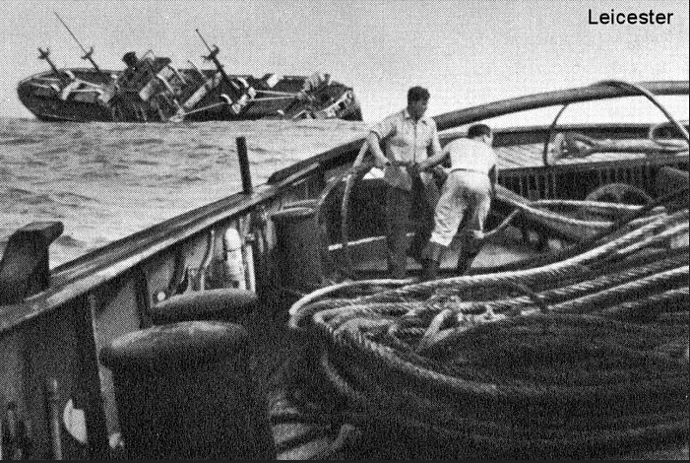 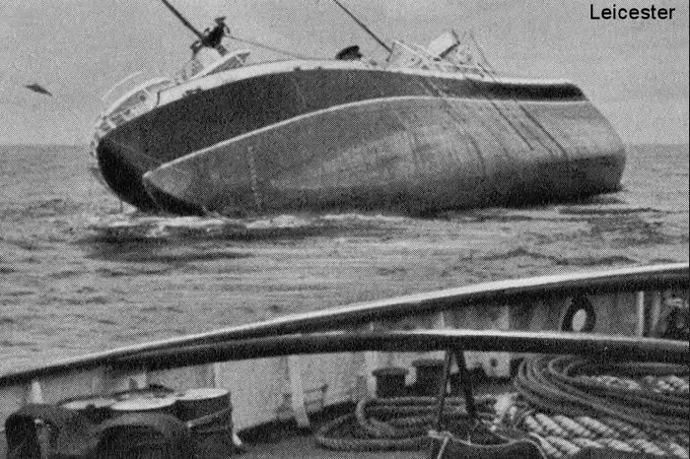 couple of hurricanes, a grounding, abandoned, under tow. It don’t matter: wont roll over, wont fly right, just hanging out until doomsday.

Leicester’s sisters were the Samkey and the Sameveron.

Both the Leicester and the Sameveron had ballast loaded in the 'tween deck which shifted. The Sameverson listed 55 degrees to starboard but it was brought safely into port. Ballast also shifted in the Leicester which took on a 40 degree list and was abandoned by the crew but was successfully towed to Bermuda.

It’s assumed that a shift in ballast sank Samkey but not confirmed as it was lost at sea with all hands.

Box boats have a much higher block coefficient than car carriers and have greater capacity of ballast. A car carriers angle of deck edge immersion occurs at very large angles of heel .
In the case of the Cougar Ace I believe that during the ballast change some double bottom tanks were completely emptied and the ship had a negative GM. A state of loll resulted and the ship listed until the water plane area resulting caused a positive GM to develop. A container ship would have suffered down flooding well before this and it would have been Goodnight Nurse.
Most of the strength of car carriers is obtained by the thickness of the steel used on the main deck. This deck is used for the carriage of “uglies” (large earthmoving machinery) and it is not unusual for timber to loaded on this deck. Especially on round voyages going back to Japan.

On the subject of ballast exchange the flow through method was my preferred method. The drawback with this method is the time it takes with the large volume carried in a container ship and the requirement to carry out the operation 200 miles from land. There is a surprising number of fly specks of land and reefs scattered across the Pacific and the program used by the USA and other jurisdictions will pick up any noncompliance.

Rolling nice and easy around the new equilibrium.

In 2005 off the Dutch coast this autocarrier the Baltic Ace had a collision with a container schip and sank within 15 (!) minutes. Out of the crew of 24 11 perished in the cold North Sea. Not even time to put on the survival suits. I donot call that normal, very abnormal.

Baltic Ace sank in 2012, not 2005. One of the design features that probably contributed to the quick sinking and loss of life was the lack of any double skin below the main deck only 1.3 m wide void tank in way of lower cargo decks.

My student project was a 4,000-unit PCTC. It was a pain in the ass to design, but by accident I ended up with a vessel that would heel to the opposite direction if the double side tanks were damaged in full load condition, exposing the damage for repairs…

edit: My memory served me wrong.

edit: Photographs of the salvage operation:

There is a righting curve for PCTC and container ship at this site, page 18.

Check out this article: Cougar Ace: The Tipping Point.

Re-examination of a study undertaken last year on the stability of the car carrier Cougar Ace lead Milan Hofman & Igor Backalov, of the Department of Naval Architecture, Faculty of Mechanical Engineering University of Belgrade, Serbia, to some interesting conclusions.

A year before the Cougar Ace incident this group was studying ship stability and they coincidently picked the that PCTC to study. The study they did determined that the Cougar Ace specifically and the PCTC design in general did not have adequate stability.

This article says the first study was wrong as it didn’t take into account the watertightness of the superstructure.

It is sad to read that simple questions to the parties that were involved remained unanswered. Those answers could produce results that are important for other mariners but the office people could not care less, so it seems. Insurance covers the damage so no sweat.

What I understand from memory is that they had to replace the ‘Japanese’ ballast water with clean water before arrival in the US. It is always tricky to pump ballast around at sea because with a moving ship you have not a good idea what is happening unless you know exactly what you are doing, all according to a strict ballast plan or protocol. I thought that they by mistake could not or did not properly fill a starboard ballast tank. With a low GM such an operation is asking for trouble. And it seems that a big wave gave the final push. Human error is written all over it.

do the ballast rules allow continuous pumping to change the tank water?

Each ship is to have on board and implement a Ballast Water Management Plan (BWMP). Such a plan is to be approved by the Administration/ RO on behalf of the Administration, if so authorized; taking into account Guidelines (G-4) developed by IMO.

Each ship is to have a Ballast Water Record Book (BWRB) that may be in electronic form and which has to at least contain information specified in Appendix II to the Convention.

From my memory which is no guarantee of anything I thought that depending on the ballast pump capacity running the pump on continuous flow for sufficient time to replace the contents of the ballast tank 4 times was sufficient.
The biggest problem I remember was carrying out the operation more than 200 miles from any piece of terra firma no matter how small.