Don’t know for sure about the Alex Haley. The one photo of taking the Kulluk under tow showed the crew handling a rope hawser.

It was the same way on both cutters I was on. On the fantail there was a big towing bitt. We flacked out the towing line on deck and secured the end of each bight with small stuff. The line paying out was controlled by cutting the small stuff with a hatchet. More hawser could be paid out same way a mooring line under strain on bitts is.

Similar to this only the one we used was a wooden beam maybe 4x4. 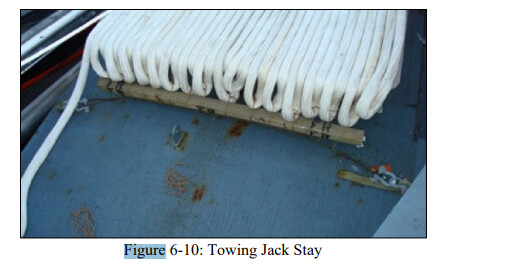 The towing hawser was recovered using the capstan with the crew flacking down the hawser as it came in.

The book I have here on towing is from 1976, Tugs, Towboats and Towing. Most of the photos show rope hawsers being used. 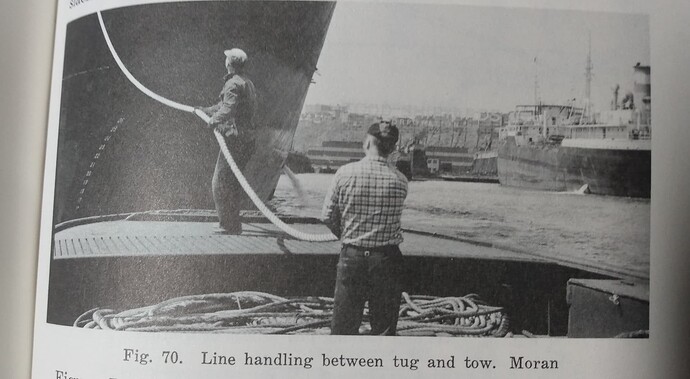 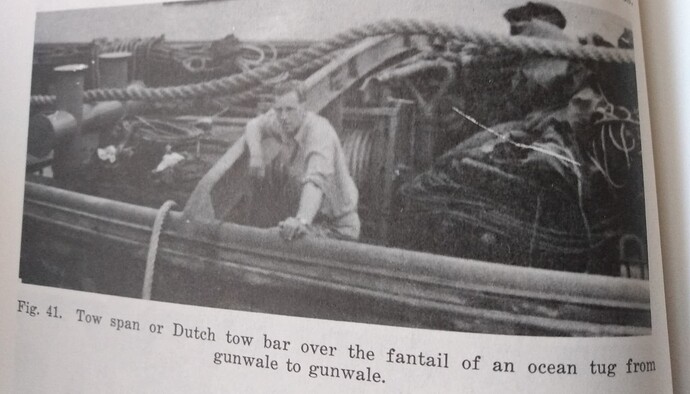 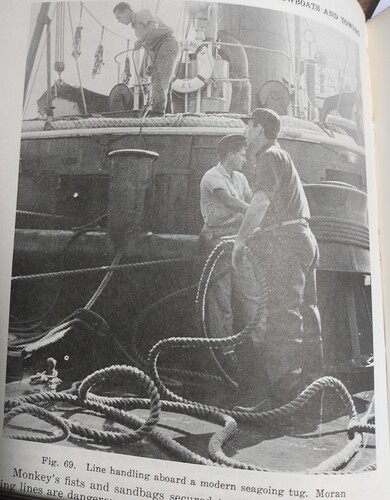 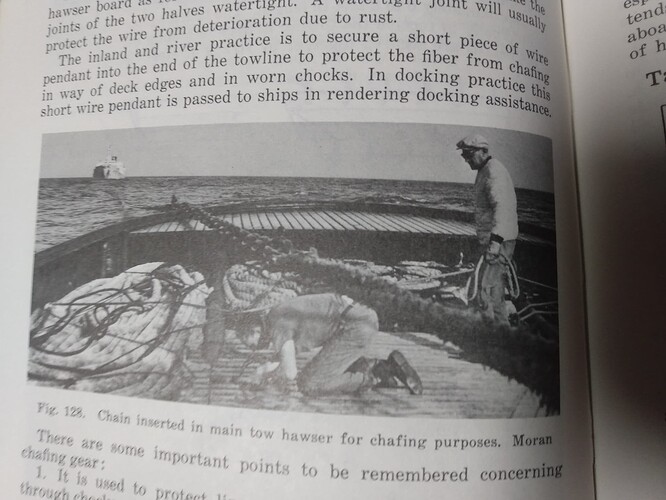 Tow winches are referred to as “towing engines” and evidently wire was starting to replace rope about when the book was written.

I agree, no catenary for the sea state. its hard for me wrap my head around 1000 ft of soft line, maybe a flounder plate holds it down? I assume the bridal is wire rope shackled to pad eyes on the deck as chain bridals seem from the general consensus are not usual?? or do they just figure eight around the mooring bits? in some of photos of the vessel in repose there appears to be a wire type towing winch on the aft working deck. The tug is less than 100 ft long and the winch seems small, so how much soft line could they get on the drum? If they had 1800 ft of wire rope on the drum you’d would think they would leave at least a layer on the spool so you may be right that it was wire.
this is nothing that a west coast surveyor is familiar with. and I’ve done hundreds of tow set ups and approvals from a YC 110 x 33 coast wise (chain figure eigh around the bitts with a keeper accross the top, bit reinforced under deck)to 700 x 150 from the west coast to the far east. So chain bridals, and wire rope is all I know.

According to the book chain bridles were used. Rope hawser wasn’t on a drum but flaked out on deck. The smaller ships had an H-bitt for securing the rope hawser. The bigger cutters I was on had a considerable bigger towing bitt. Can’t find a photo but it was a combination of a chock and bitts. The line passed from the horizonal mounted bitts on the aft side through the chock-like part.

That’s what we did on small CG Utility boats 30’s & most 40s , 41 footer had a line reel, hand turned not a winch. Was safer no loops on a small aft well deck. Took longer than making up the line as shown but appreciated did not have to leave the wheel to make sure the crew did it right, boat operated with 3 total coxswain inside on the wheel.

So what does the government do, pay commercial tugs to stand by key spots or take the risk. Example the traffic that passes Cape Hatteras is high volume containers bulk carriers and large portion of New Englands oil . Large ship gets in trouble lot easier to put a line on her than recover a stranding on the beach. Today there is little commercial ability to assist quIckly. Suppose the Evergreen that grounded outside Baltimore stranded on Cape Hatteras instead, South of New York I don’t know of any capable salvage tugs that could assist before it grounded.

So we take the risk.

when i first started (1978), the older tugs with enterprise reversing diesel had large H bitts and Washburn and Doherty hydraulic capstans off set to one side. they were primarily used for harbor work

That book was written in 1976 and it mentions that wire was cheaper then rope but that the “towing engine” was a bigger initial investment.

Presumably less money in the long run than paying the extra crew it took to use rope hawser.

It also mentions that the sea-going tugs started switched to using wire before the coast-wise and harbor tugs. 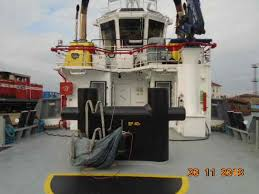 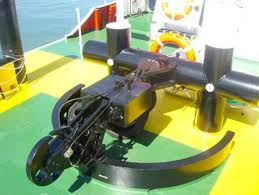 Looks like ship assist work. I changed the title of the thread. 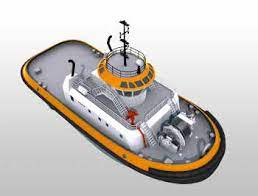 Still used on some older tugs that is performing both ship handling and coastal towing, although
most newer combination tugs are now equipped with winches at the bow and aft deck.

Here is an example of a large combined ship handling/coastal towing/anchor handling tug: 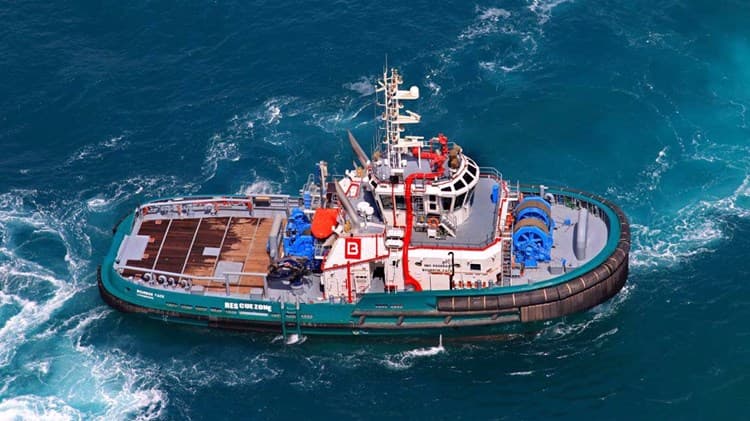 Nothing wrong with soft hawser hauled on a capstan with a stopper line to switch from the the drum to the H Bit. More versatile than a tow winch & can use the drum for multiple jobs using snatch blocks. Cherokee had a medium capstan forward large one aft and 3 on the 01 deck one for each side to launch the motor life boat another aft we used for light tows Trawlers mostly. Up high did not interfere with the towing machine and pulled well. Story was high mount intended to tow seaplanes . May or may not be true.

But you need crew that knows how to pass a stopper, can make them up as needed on the boat and experience with capstans. Short handed boats today could never operate that way. Many docking tugs operate with a two or three man crew.

That knowledge is fading fast. When I was a kid small boatyards all hauled with a capstan the beach seine fisherman used them too. Either mounted on the bed of a small truck or in one case small house on the beach old engine Inside drum out front.

On H bit vs crucifix. H bit is just that two uprights with one cross bar, crucifix one upright one cross bar. Used for lighter duty and able to surge out under control better.

But you need crew that knows how to pass a stopper, can make them up as needed on the boat and experience with capstans. Short handed boats today could never operate that way. Many docking tugs operate with a two or three man crew.

Yes, I’m not trying to sell the idea we should quit wire and all use rope hawser. Just making some remarks about the subject.

On the Gallatin the total enlisted deck dept. was about 50 people, Being short-handed was not an issue. Also there was lots of room to lay out and recover the line. Passing a stopper was routine because it was done at every mooring operation.

Being familiar with a “soft” tow line and the ability to apply a stopper are both skill sets that are best kept handy by all onboard. Particularly on a tug towing a barge, where your big wire towing system could fail and you could find yourself trying to gather up the barge with your emergency system and Orville hook. At night. In krap weather. With 5 guys who have never done it before.

On all the CG cutters I was on, all had soft tow line. From 10”/ 3-strand on my first ship (Yocona) onwards. The 378 foot cutters had a pretty nice tow setup pre-Fram, but after the CIWS was put in the middle of the fantail, we had to shift to a bridle arrangement aft. We towed a lot of ships; including Navy oilers! Safe and dependable, depending on the quality of the chafe gear!

Agree soft is very good and much better than in my CG days 1966 -1986 with last part Reserve BM1 augmenting at a station. Those days soft mostly meant Nylon & real stretchy or Dacron no stretch at all. Short period on a WPB that was soft line run off a capstan and H bit. All WPB work offshore. They towed a lot of Trawlers some fairly large & soft better choice than a towing machine on a light fast patrol boat.

The 378 foot cutters had a pretty nice tow setup

Do you remember what the towing bitts looked like? My recollection is that it was similar to an H-bitt in function but not in appearance. The lower half was solid steel, not open. The line passed the upper part of the H, (which was not squared off, didn’t look like an H) and made fast on the bitts which were on the forward side. The bitts were horizontal, not vertical.

Can’t find a photo, does that sound right? Presumably that type has a name but I don’t recall hearing one.

You are correct about the bitt arrangement; they were forward of the bitt; as I recall the tow bitt itself was only a fairlead to the bitts. I did soft hawser towing ops on the Yocona (213), Resolute (210), 2 different 378’s (Mellon and Midgett)- prefram and postfram, Point Carrew (82 WPB) and Roanoke Island (110). The towing capabilty was most obvious on Yocona, followed by the Mellon (prefram).

I found a couple of photos on a 378 site on FB; first is a good view of aft side, and lower is the mess I had to deal with postfram for towing! 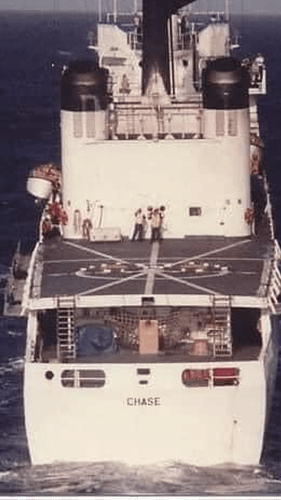 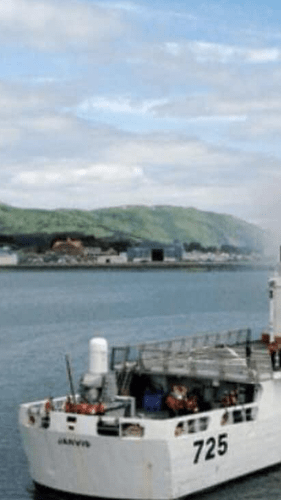 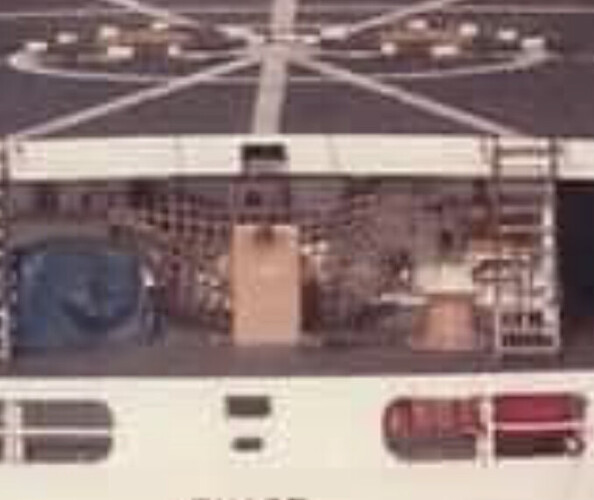 The tow hawser passed through the opening at the top and was made fast on the bitt which can be seen on the forward side. The capstan on the stbd side.