Anyone see the headline: “WH lifts restrictions on fuel delivery” details mentioned something about a old obscure and etc. thing called the 'Jones Act"? so now they can get more ships to deliver fuel to miami … where are all the foreign flags coming from so fast to service Miami?

I’m just wondering why, with MSC Atlantic right up the coast they aren’t just loading up some oilers from Norfolk and running them down there once Irma passes. Seems like a perfect “feel good” option, and good training to boot.

Stop wondering … this has nothing to do with utilization of public resources or maintaining the skills of mariners and condition of those publicly owned ships.

Nooooo say it ain’t sooooo. You don’t mean to say that somebody got their pockets lined for this do you? [/sarcasm]

Looks like somebody is being our friends in this at least… Houston, Texas-based refinery company Phillips 66 has cancelled its request for an exemption from Jones Act rules, which it made in response to the effects of Hurricane Harvey. The hurricane brought much devastation and historic levels of flooding...

Serious question. Why is such a big fuss made about the Jones Act, and then nobody uses the waivers? Do the Jones Act qualified shippers drop their rates when the waiver is in effect or something? What gives?

I think that nobody makes as big of a fuss on the backside of the waiver when it turns out that it wasn’t used or was barely used. We’ll probably see the lack of hubbub again in 10 days.

The problem is the media, with the help of McCain and other anti-Jones Act politicians, have spun up the masses up into thinking the Act has something to do with the relief supplies not moving from the port inland or the supplies not arriving or some other crap. The masses don’t know anything about the Act other than what the media has told them.

The American Merchant Marine is too fat, dumb and happy. It wants to stay that way. But, a few in Washington wisely realize that foreign competition could be a useful tool to correct this insidious problem. The possible use of foreign flag ships helps to protect the tax payer from any price gouging that might occur by anyone that attempts to exploit this emergency. Thank you, John McCain.

Many Americans don’t realize that what happened in Puerto Rico is a domestic disaster, not a foreign one. 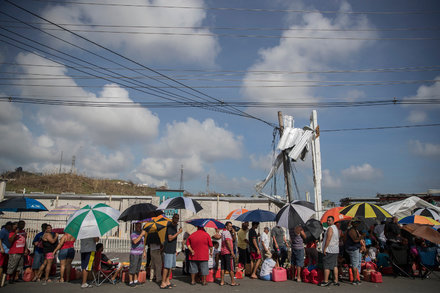 A new poll suggests many Americans don’t realize that what happened in Puerto Rico is a domestic disaster, not a foreign one.

The American Merchant Marine is too fat, dumb and happy. It wants to stay that way. But, a few in Washington wisely realize that foreign competition could be a useful tool to correct this insidious problem.

I bet you work on a yacht.

My Dutch heritage probably qualifies me as more of a Yankee than the vulgar bully posting as “Damn Yankee”. The shoe that I wrote about seems to fit that person perfectly.

You lose. I have always worked deep sea and offshore, never on a yacht, and have survived three hurricanes and a Beaufort scale Storm 10 in 55 years of seafaring.

Most favorable views of the Jones Act come about because of what happens to those American industries that have no such protections and the resultant effect on citizens.

Ohh someone with a “foreign sounding” name voicing a different opinion than ours.
Must be some dumb foreigner that know nothing about America and the Jones Act.
Most likely not a proper “Mariner”. A Yachty maybe who dares to call himself Captain

Nice to see somebody who dares to stand out with their name, not hiding behind a silly " nom de plume".

Nice to see somebody who dares to stand out with their name, not hiding behind a silly " nom de plume".

And since you are near the end of your career you no longer care if those of us who are in the middle of our careers get replaced by cheap foreign labor if the Jones Act gets abolished.

I can understand captain Van’s viewpoint. Nothing in the world brings down prices and encourages competition and inspires more and new industries like a free market economy BUT: in the international trade, like us sea farers, We (american sailors) use the US dollar! Until they invent a common world currency or one backed by something other than “good faith” we need the jones act to save our asses and the American Maritime! Otherwise it’ll be gone overnight.