This is still a regular safety observation made onboard various vessels and offshore structures. “Never Saddle a Dead Horse” is a phrase used to help people remember the correct orientation of attaching a Bulldog Grip onto wire.

Bulldog grips often used for the securing of project cargo, both under and below deck, mast stays and crane wires. The single most predominant factor associated with the failure of wire cargo lashings is the incorrect application of Bulldog Grips. Failed lashings can result in considerable damage to cargoes and can also pose significant risk to the crew and the safety of the ship. They must not be used on lifting and mooring wires, or lifeboat falls.

When installing personnel should consider the following: 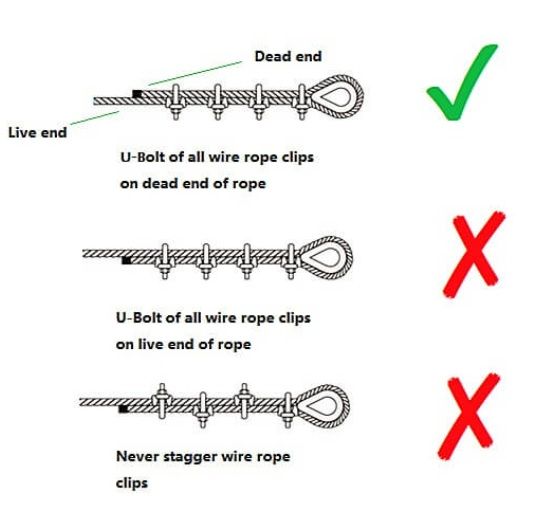 Once you have read this, the correct method of fitting Bulldog Grips seems obvious however, the majority of those seen on board are still installed incorrectly. This short you tube video (Never Saddle a Dead Horse - YouTube)) provided by Tway lifting products in America, is a good comparison of the correct and incorrect rigging of Bulldog Grip installation

The information in this post was collated using the COSWP, P&I information, CSS and best practices.

I find that for things like this it’s much easier for me to remember how to do it when I know why the correct way is correct instead of trying to memorize some weird saying.

The U stresses the wire and creates a pinch point whereas the saddle evenly distributes the pressure.
Therefore you don’t want to U on the side under tension, you want it on the dead side.

I thought this was going to be advice to cowboys. I learned this from the guy who taught me rigging and though I never heard that saying, I like it. The why is important but mnemonics and phrases are a useful tool when having to memorize a lot of new stuff quickly.

The why is important but mnemonics are a useful tool when having to memorize a lot of new stuff quickly.

Sure, but instructors should teach both because different people remember things different ways.

The way I was taught it was,
“U get the short end”

Even easier to remember