its debatable whether or not a master osv could get mate osv with no testing.

Not debatable. For example:A master osv less than 3000 can have a mate osv “Unlimited” to allow him to sail as mate on vessels over 3000 tons. No testing needed.
It’s a lesser level license, you have surpassed the requirements if you already hold an master osv license(tonnage errelavent) or 500/1600 ton mate

If you read what I quoted there is no need to test if the person already holds a master osv license. Also if you already hold a license 500tons or more you qualify for a mate osv.

If you quoted something it should be in quotation marks and the source should be noted.

I’ve read everything you’ve posted, no where have you provided proof that a Master 1,600 can get a Mate OSV without testing. You made a baseless assertion to that effect, that’s all (and that’s not proof). 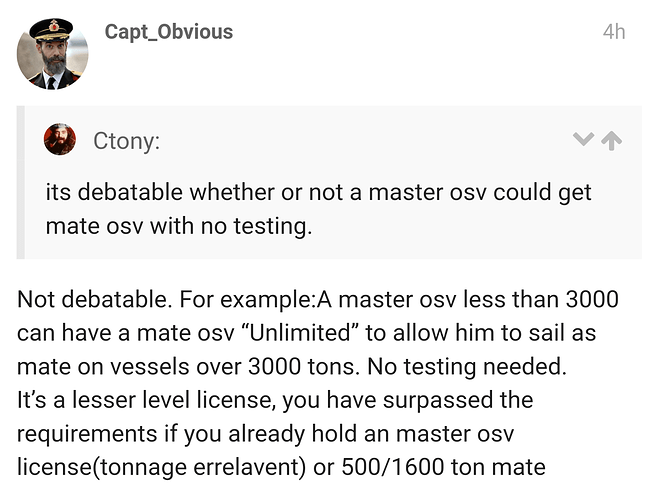 This was posted earlier in the thread when this all started. Read grandfathering… it says exactly what you can do but since I’m a nice guy here is Thebes quoted section from the link above. Since this was the second thing posted I would think people giving answers based off it was proof enough.

“Mariner must hold/qualify for a valid endorsement as Mate 500/1600 OC/NC, he/she may have the MMC endorsed for service as Mate of OSVs within same route. No additional training, assessment, or exams required unless mariner is increasing from Near Coastal to Oceans.”

Can anyone shed some light on this ? The way I understand it is that a master OSV 3000 will get a mate 10,000 OSV when the mariner renews his license. So does that mean he has an option to go to 3rd without testing? Just curious. Found that in the marine safety manual In addition, mariners holding an endorsement as Master of OSVs of Less Than 1,600 GRT/3,000 GT ITC will be issued an endorsement for Mate OSV with a tonnage authority “Less Than 10,000 GRT/GT ITC.” This Mate OSV endorsement will b…

no wonder this sounded so familiar, especially since I was chiming in on it. duh.

mr cavo gives a link to the marine safety manual volume III which states a master 1600 grt osv can get a mate osv.
Now I am just debating with myself should I risk spending the money to take the risk of tangling with a evaluator that will find reasons not to issue it to me, or wait till I renew when I’ll have to spend the money anyway…

@Ctony thanks for sharing, I couldn’t find this when I needed it. But I’m glad to know I wasn’t giving out false information to you or anyone else.

If you don’t need it right now I would hold off and just attach it next time. Don’t give any more money than you have too.

I’d suggest applying for everything that you can, as soon as you can.

The few dollars for a consultant and application fees is a trivial expense. You’ve already spent the big money on STCW courses.

At some point, the US license system is going to get simplified again probably by phasing out all the trade restricted licenses, especially the OSV licenses. They’ll probably give most of the OSV guys a grandfathered 10,000 GRT license with no trade restrictions.

The way things are headed. There will be very few new mates that don’t come out of an academy with an unlimited 3rd anyway. Workboat Acedemy and probably more programs like it may produce some mates.

just got the email. I am approved.
I will add that this has been the fastest transaction I have ever had with the NMC, except medical.

I got my Mate Osv endorsement within 3 weeks of applying. To my door. Funny, I didnt apply with a drug letter. Although I am currently working and had a drug test within the last three months.

I’m really glad to hear that NMC has greatly improved its turn around times. Probably, it’s mostly because the application volume has dropped way off. Maybe all our complaints to Congress had some effect.

I got my Mate Osv endorsement within 3 weeks of applying. To my door. Funny, I didnt apply with a drug letter. Although I am currently working and had a drug test within the last three months.