I hope you like lobster, because it looks like there will be plenty on the US market soon:

there will be plenty on the US market soon

Try to use a shred of sound logic when you troll. The retaliatory traiff is based on U.S. lobster not being able to compete in EU markets, i.e. the EU isn’t buying much of it. So how does that increase the supply and lower the price? If Adam Smith were alive he’d find you and give you a dope slap with his invisible hand.

There may be more to it than you think.
Trump have been looking at any excuse to put trariffs on European cars for a long time.

US export to EU before the spat over aerospace subsidies was quite substantial, at over 9K mt/yr in 2016, but fell markedly when the US threatened tariffs on cars and other EU exports:

US lobster exports to EU cut in half before aerospace fight; China trade...


Besides, the tread deal between EU and Canada has made the US lobsters less competitive on the EU market:

Canada may be getting beaten up at the NAFTA talks in Washington, but off the east coast, it is enjoying something of a free-trade coup

The Trade War with China also took away the large Chinese market for US lobster.

If that doesn’t leave more lobster for the US market, thus lower price, they will have to leave the lobsters in the sea. (??)

I see no price change at retail for lobsters. Would like to, but still ,those cats are mighty proud of their product, and perhaps rightfully so.

Trump have been looking at any excuse to put trariffs on European cars for a long time.

Does the EU currently the have a higher tariff than the USA?

I think its just a bluff as last time Trump mention increased tariffs the EU reacted immediately as its a big threat but I can assume when it was explained to Trump how complex the car business is it went away nevertheless the EU had higher tax than the USA on imported cars at the time as it does on most USA imports, like wine etc.
So its all one sided trade like the USA and China

Lobster is around £15 per kilo where I live, and that is buying directly from a fisherman, quite expensive…

The Trade War with China also took away the large Chinese market for US lobster.

If that doesn’t leave more lobster for the US market, thus lower price, they will have to leave the lobsters in the sea. (??)

Those articles are from two years ago. Current prices already reflect the loss of exports to China.

I don’t see why a threat over auto tariffs would cause the supply to increase in the near future. From what I see the EU imports lobsters from Canada because there is no tariffs while there are currently are tariffs on U.S. lobster.

Yes EU imports lobsters from Canada because there is a trade agreement between the two, thus less (or no?) duty to be paid on goods and products traded between the two.

A trade deal between the US and EU has stagnated as they cannot come to an agreement.

PS> I notice that Canada is importing a lot of lobster from the US. I just wonder if…? (No, they wouldn’t, would they??)

I don’t know about EU, but in Norway there are a lot of imported US made cars, but mostly Tesla. (Other US cars are not popular, except by a small group of enthusiasts)

You don’t see many US made cars in Singapore either. (Except Chryslers made in China, used as "Limousin Taxis)

This article is both fairly recent and a more in depth than newspaper articles. 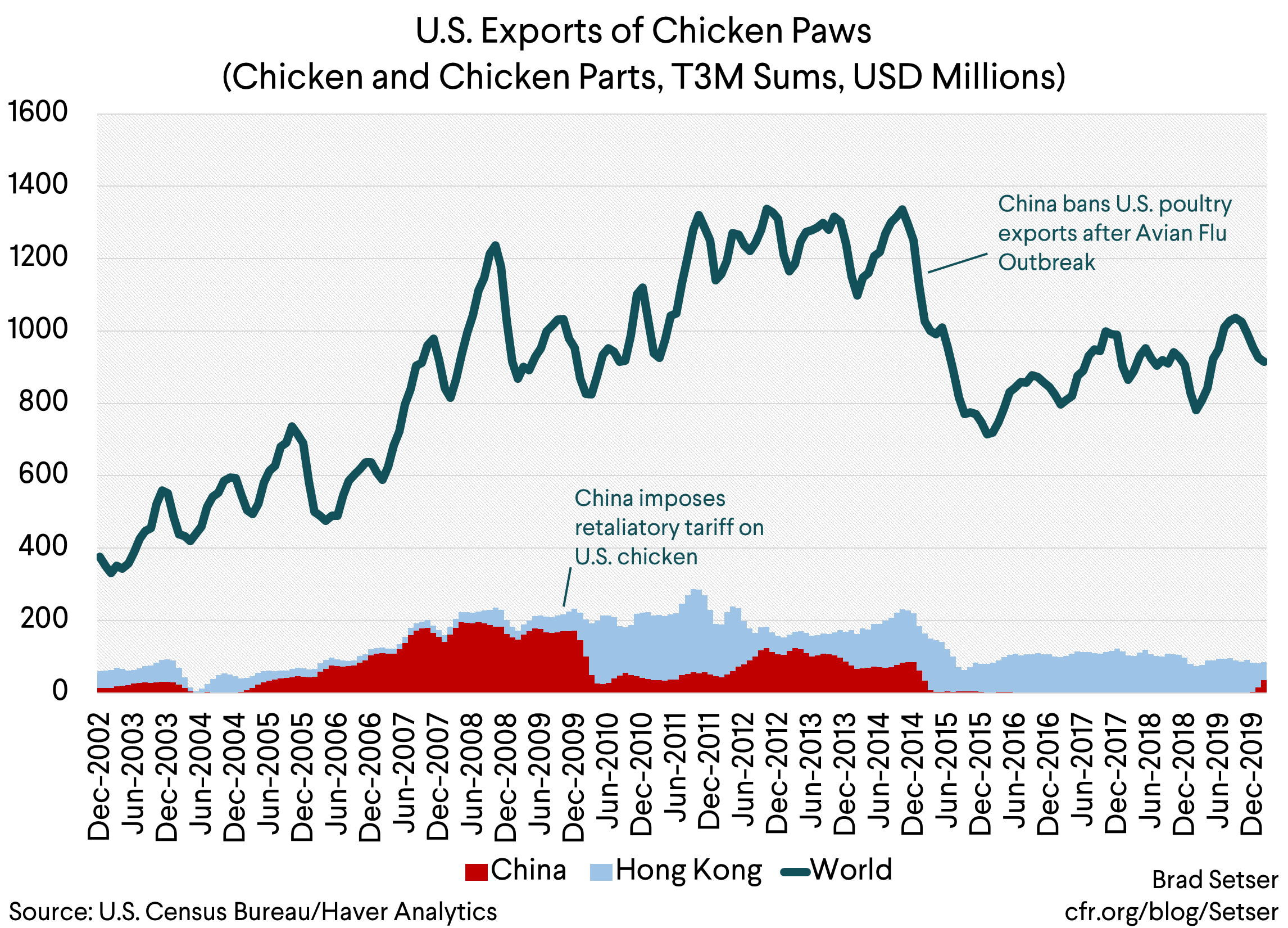 How Effective Have China’s Agricultural and Seafood Tariffs Been?

There is a case that viruses (bird flu, swine fever, and now the coronavirus) have had almost as big an impact on Chinese-American agricultural trade as the trade war.(And more than most want to know on trade in crustaceans)

sure, the market is tiny to Europe so fair trade says what the problem if the tax is the same both ways?
The EU lowers to the USA level or the USA raises to EU level?
Obviously it is a problem as when Trump mentioned it in 2018 Junkers flew there the next day

I bought some Canadian lobsters last Christmas. Smallish and the meat was like rubber and tasteless even the bisque made from the shells was poor. Never again.

I’ve been spending a bit of time on the water around here and am amazed at how few traps have been put out. Lots of pots still stacked in yards all around town. I talked to two local girls fishing their 5 traps (for personal consumption only) and they say the bugs are definitely in. My guess is with demand down and bait prices high the pros are waiting to see if dock prices will rise before wetting their traps.