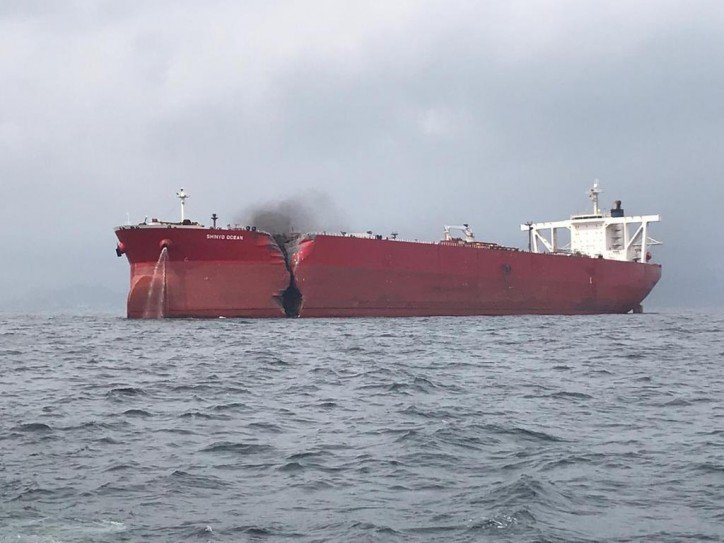 The imprint of the bulbous bow is clearly visible. Classic hourglas punched hole.

Little is known as to the cause of the incident; the companies in charge of the two vessels remaining tight-lipped as to the details surrounding the collision.

The Aseem had arrived at Fujairah Anchorage from India in order to undergo bunkering, while the Shinyo Ocean had been anchored at Fujairah since March the 16th.

Regarding the ‘little is known as to the cause of the incident’ watch this video! Some classy manoeuvring performed by the Aseem. Bull’s eye! 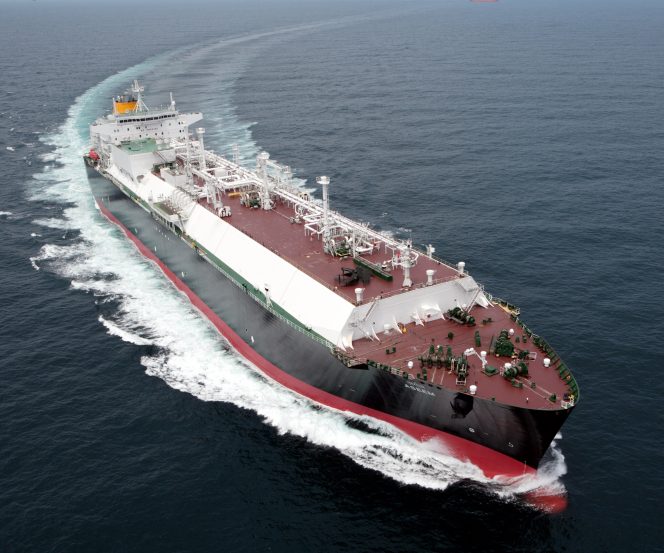 The LNG tanker Aseem, not exactly the type of ship to fool around with!

Not pertinent to the incident, but that concave entry caught my eye. That shape has been depreciated in sailing yachts for decades, can’t help but wonder why they use it here.

??? From the AIS video I do not see the Shino Ocean being anchored unless it was dragging anchor at 6 kts

Both aiming for the same spot to anchor and forgot there is an everso slight difference between a VLCC and a 35’ yacht!

On a more technical note…
How does the hole punched by the bulbous bow, which is normally under water, come out of the water in the photo?

Was the tanker ballisted sufficiently to be medium draft, then lightened after the collision?

I wonder whether the overhang of the bow lifted it enough at the beginning of the collision.

In which case, the hole from the bulb would be lower and definitely under water when the tanker leveled up.

After the collision they must have deballasted the ship to lift the hole as much as possible above the waterline in order to prevent further flooding. Not quite but rather close by the looks of it.

Both ships were turning starboard and were probably in ballast and Aseem had big stern trim and bulbous bow above water at time of contact incident.

Do large LNGCs ever transit with a large trim? I don’t recall seeing photographs of them on anything but (nearly) even keel.

Both ships were turning port

??? You must have watched an alternative AIS video from what was posted

They were of course turning starboard.

UAE is reacting quickly to the collision off Fujarirah: 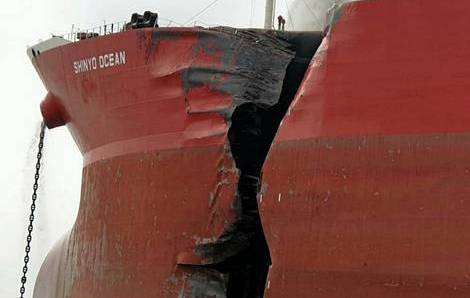 Authorities in the UAE have wasted little time in dishing out fines to two companies involved in a dangerous collision off Fujairah 10 days ago. LNG carrier Aseem and VLCC tanker Shinyo Ocean were involved in a collision on March 25, which resulted...

Just fined for the over speed not for the colregs. They leave that for the investigation to be sorted out.

The photo shows the clock glass damages of the fore peak and bosun’s store of M/T Shinyo Ocean, i.e. the hull, longitudinally framed side plate being pushed in by the bow of M/T Aseem. The strongest structural member, the tank top of the M/T Shinyo Ocean fore peak, probably horizontally sliced the fore peak of M/T Aseem into two parts. So only two fore peaks and a bosun’s store were damaged. Easy to repair.