You know your REAL Singaporean when you …:

15 signs that make you a true blue Singaporean

These are the confirm guarantee plus chop signs you're real Singaporean

Of course there is also this:

15 dumb questions Singaporeans get asked all the time

Let’s sort these out once and for all

7 stereotypes about Singapore that are not true

Singapore do not have only Tiger Beer and Singapore Sling,
There is a new flavour (or several) in town:

The Singaporean making gin with ingredients from your neighbourhood market

Talk about “local spirit”. Ashwin Sekaran's Singapore Distillery boasts gin flavours made with pandan, different types of lime – and even ones that are inspired by the Singapore Sling and bandung.

Singapore may have come a long way since independence, but racism is still a threat to take serious:

SINGAPORE: Finance Minister Lawrence Wong on Friday (Jun 25) appealed to the majority Chinese community in Singapore to be sensitive to and be ...

One of my first memories from Singapore is from 1960, when Singapore was still a British colony. I was 16 years old at the time and in port with a WW Line ship.
While visiting the Norwegian Seamen’s Church (then in Prince Edward Lane, near Connell House) we were told by the Police not to go out because of fighting between Chinese, Malays and Indians on a vacant lot nearby. No fire arms were used, but parangs and cangkuls causing nasty wounds,

SINGAPORE: The Ministry of Defence (MINDEF) and the Singapore Armed Forces (SAF) have achieved “herd immunity” against COVID-19, with more than 90 ...

Singapore has a long maritime history and some of it can still be seen in daily use in Singapore waters, 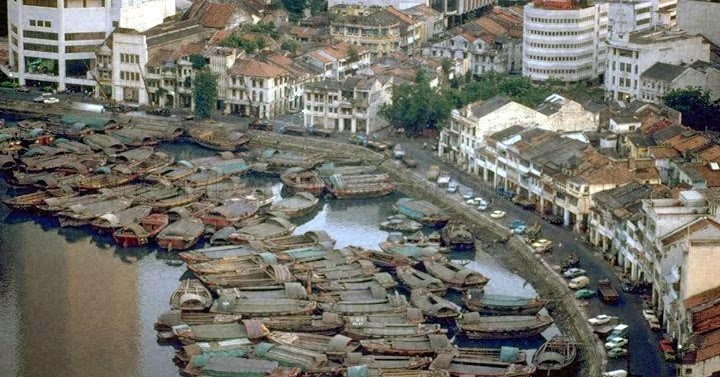 Johorkaki@gmail.com based in Singapore Johor Malaysia travels the world for food

Although the “Bumboats” seen on Singapore River today are replicas used for “River Cruise”.
They are now electric driven because Marina Bay and Singapore River, Kallang River and Geylang River that feeds into it are now a large fresh water reservoir, separated from the sea by Marina Barrage:

Singapore is planning for the day when all vehicles on the roads will be electric (or other clean energy).

SINGAPORE: SP Group has started a trial to test and verify the possibility of transferring energy from the batteries of electric vehicles (EV) ...

Since Singapore does not have any domestic wind or hydro power possibilities, only solar power is available to supply clean electricity, unless safer nuclear becomes available.

have you worked out there is not enough area in Singapore to run Singapore via solar yet?
Singaporeans being the most power hungry population on the planet by at least double the next worst, add cars and maybe it will get to 3 times greater.

I hope they put nuclear in , they have been thinking about it.

One more British Expat that think he is not required to abide by the laws of Singapore:

Man seen without mask on train charged with failing to wear mask outside...

SINGAPORE: A man who was seen in a viral video not wearing a mask on a train was handed a fresh charge on Monday (Jul 19) for failing to wear a ...

He will probably be escorted to Changi soon. (whether the prison or the airport to be decided by the courts)

Correct, Singapore can not run on solar power from own “production”, even if every rooftop and reservoir surface is covered with solar panels and there are no plans to build conventional nuclear power plants on the island.
Maybe new and safe technology will be developed in the future that change that.(??)

Solar power may be imported from somewhere with ample space and sunshine, either in the form of electricity transmitted as HVDC by cable, or in the form “green hydrogen” by hydrogen powered ships, or ??? (Time will tell)

One thing for sure, Singapore Gov. is not going to be taken by surprise, They are already planning for the day when oil and gas will be phased out as a fuel source:

By Andrew Janes and Dan Murtaugh (Bloomberg) — Royal Dutch Shell Plc announced late last year it would slash capacity by half at its biggest oil refinery. For Singapore, where the plant has...

Yes, whatever the ships will be using Singapore needs to be ready to sell it

Singapore in the good ol’ days:

Ships at anchor on Inner Roads are familiar.(>3:20) Used to anchor there with Jo-Tor at that time. Totally unregulated, No pilots would take ships in there.

Singaporeans in California flock to the first Killiney Kopitiam branch in Palo Alto for their favourite Singaporean food:

Killiney Kopitiam’s first cafe in the US a draw for customers who miss...

SINGAPORE — After Ms Amanda Toh Steckler opened Killiney Kopitiam’s first branch in the United States in August last year, it quickly became an outlet for Singaporeans from all corners of California to get their home favourites such as kaya toast and...

PS> The first thing I did when arriving back in Singapore last time was to visit my favourite Ya Kun outlet for Kaya Toast, Soft-boiled Eggs and KopiO Kosong:
Ya Kun is now a chain, like Killney Kopitiam, but not yet with branches in the US or Europe AFAIK. The main difference between them is that Ya Kun use brown bread that has been toasted over charcoal:

I have been a customer since it was a small stall in a disused Godown in Telok Ayer Basin while La Pa Sat was under restauration:

In all their outlet they have copies of these sings on display: