As much as any of us mariners know the vastness of the oceans…it is rather amazing to think that a vessel can drift for a year without being spotted. Since the major shipping routes are all so well established, there are hundred of thousands of square miles out there which rarely if ever see a ship. I have read of ships torpedoed in WWII drifting as derelicts for years in the Atlantic…can you imagine the sight of an abandoned freighter just drifting out there all rust streaked and listing? 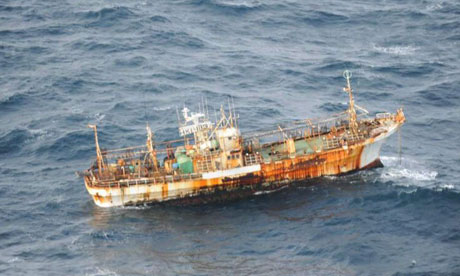 Reports that a 150ft squid-fishing boat ripped from its moorings in the Japanese port of Hachinohe by last year’s tsunami has been spotted drifting, rusty and abandoned, off the west coast of Canada – more than 4,700 miles away – saw news media around the world reach unhesitatingly for the words “Mary Celeste”.

In fact, the Flying Dutchman is the original ghost ship, doomed never to make port and sail the seas forever. But despite being celebrated in verse and prose since the 1700s, as well as inspiring a Wagner opera and the Pirates of the Caribbean, she was only ever a legend.

The brigantine Mary Celeste really was found abandoned, heading for the Strait of Gibraltar in 1872. She was missing her crew but otherwise intact, carrying six months of supplies and still, remarkably, under sail. The last entry in the ship’s log was written 11 days prior to her discovery.

In 1921, the five-masted schooner Carroll A Deering washed up on a beach in North Carolina; six US government departments investigated, but the episode has never conclusively explained. Nor could an inquiry into the fate of the 25 passengers and crew of the merchant vessel Joyita, discovered abandoned in the Pacific in 1955, return any verdict other than that the incident was “inexplicable on the evidence submitted”.

More recently, in 2006, the tanker Jian Seng was found off the coast of Queensland, Australia; not only was its crew missing but neither its origin nor its owner could be established. The same year, coastguards investigating the case of the schooner Bel Amica, discovered drifting off the coast of Sardinia, found half-eaten Egyptian meals, French maps of North African seas and a flag of Luxembourg – but not a living soul on board.

Even more mysteriously, the Kaz II, a 12m catamaran, was spotted near the Great Barrier Reef in April 2007 with its sails up, its engine running, the radio and GPS working, a meal set to be eaten and life jackets and survival equipment still on board, but no sign of its three-man crew. And four years ago when the Taiwanese fishing boat Tai Ching 21 was found drifting near Kiribati, a search of 21,000 sq miles of the Pacific Ocean found no trace of its captain or 28-strong crew.

On top of all that, they say that there are more of these vessels drifting out there…

I heard the USCG is going to use her for some target practice today. Will post the video once I find it.

Why doesn’t someome hook up a tow and run it to a scrap yard? Scrap steel is going for $.14/lb. There’s a lot of pounds there.

I know - Shooting it up is more fun. Bet they drew straws to see who would get to be the triggerman.

Why doesn’t someome hook up a tow and run it to a scrap yard? Scrap steel is going for $.14/lb. There’s a lot of pounds there.

I expect getting crew on there to connect the tow would be very dangerous.

There was a Canadian fisherman who was ready to do that but it appears the vessel drifted into the US side so down goes Frazier!

Although when you think of the cost of fuel to bring it into port and labor to do the srapping it might not have been quite so profitable and can yhou imagine the hell the USCG would put you though if you tried top bring it into the US?