Turbocharging for Marine large 2 stroke engines didn’t happen until the 1950’s. With turbochargers energy otherwise lost in the exhaust gases could be utilized. Once this occurred the large engine manufacturers began making strides in larger, more efficient engines.

Gee, my father thought he had it bad in his little “spit kit” when it took fifteen seconds to answer an astern bell. He had eight GM 8V-71 engines on two shafts.

Is there any savings in a vessels lightship with one plant versus another, or savings in fuel carried?

I would certainly think that any diesel plant would weigh significantly less than an equivalent HP steam plant due to there being no boilers, condenser, reduction gear, far fewer pumps and piping and all the extra ancillary equipment like feed heaters and deairators that a steam plant requires.

A diesel plant is mostly cooling water and fuel system piping and pumps needed to operate.

as far as fuel storage goes, that is really just a function of how much range any ship can go but a motorship could go farther on any given quantity of fuel oil simply based on better economy.

The last hold out for steam propulsion was the ultra large crude carriers and LNG ships . The former changing to diesel when larger diesels came into production.
I sailed in a steam powered ULCC in the early 70’s that was UMS and the system worked extremely efficiently even carrying out automatic soot blowing. In one port we parted a towline to the tug on the stern and an emergency full astern was rung. The system functioned faultlessly transferring the electrical load to a full load diesel from the TA and putting all sprayers on the boilers in an instant and the ship pulled up.
I believe that only a major oil company could afford the capital cost.
In my time in tankers the consumables were relatively inexpensive items such as refractory cement ,fire bricks and packing and I can’t recall any problems with the turbines and shafts except on one ship where there was problems with the plumber block.
We could steam at 3/4 of service speed on one boiler and use the grouped up cargo pump Condensers and shut down the main codenser for cleaning.
The majority of the ships I sailed in were not UMS and required an engineer, junior engineer and two wipers in a watch.

I believe that only a major oil company could afford the capital cost.

I believe Exxon had one or more steamships that had the capability of going unattended. I don’t know how it went or if others tried it as well. There weren’t many to my understanding.

In my time in tankers the consumables were relatively inexpensive items such as refractory cement ,fire bricks and packing and I can’t recall any problems with the turbines and shafts except on one ship where there was problems with the plumber block.

The M&R budgets on steamships are small in comparison to motorships. That worked in their favor until the price of fuel went through the roof.

Isn’t the simple answer, at least in the international case, that you couldn’t get enough HP in a single engine to; a) power the size of ship wanted, or; b) get the speed wanted??

Once large enough diesel engines became available the turbine ships where phased out and regarded as white elephants.

In the US they hung in there a bit longer as there were no large diesels being produced in the US (as has been pointed out by others) and adding more medium speed diesels on multiple shafts were not practical. Multiple diesels geared on a single or twin shafts had proved not reliable (over two per shaft).

In the US they hung in there a bit longer as there were no large diesels being produced in the US (as has been pointed out by others) and adding more medium speed diesels on multiple shafts were not practical. Multiple diesels geared on a single or twin shafts had proved not reliable (over two per shaft

Certainly not having a licensee to manufacturer large low speed engines put a damper on things. But once the decision was made to go diesel it was a matter where to import the engine from, or as of late, what foreign yard to partner with to get the complete engineering package.

In case of the US you are probably right. Internationally it was that the ships grew larger faster than the engine manufacturers could develop big enough engines. 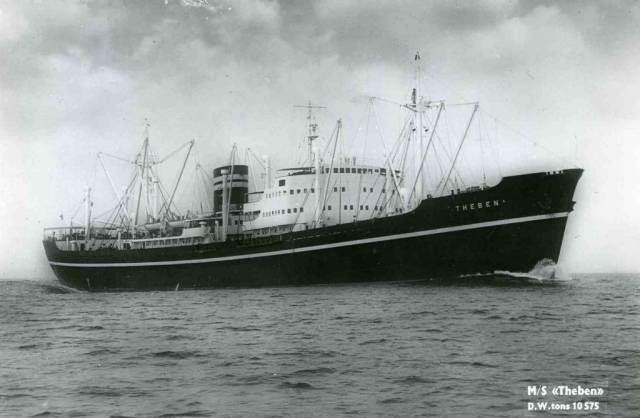 Also consider who manufactured steam turbines, reduction gears, and boilers vs slow speed diesels. Sending license money to a furriner who doesn’t make campaign contributions vs big bucks to defense contractors just might have had something to do with it.

but we didn’t need to send any licensing money to anybody! there used to be US designed and fabricated slow speed diesel engines made right here in Milwaukee! but they ended up dying a miserable death…why is the question which nobody seems to be able to answer here 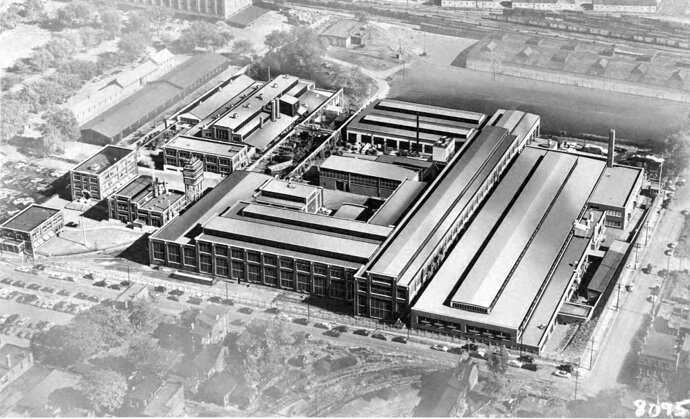 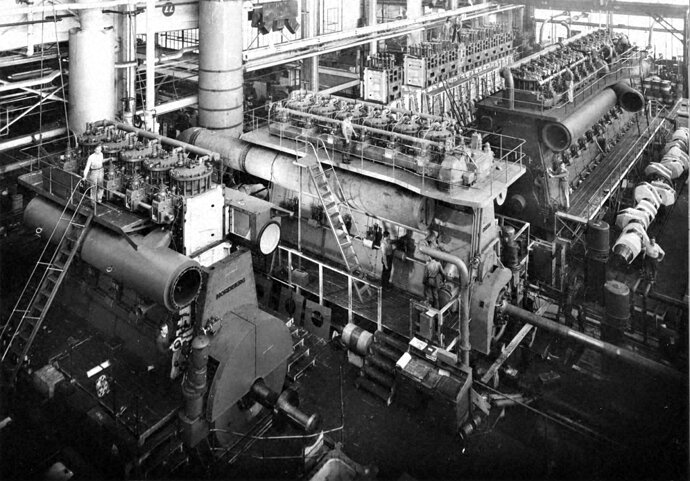 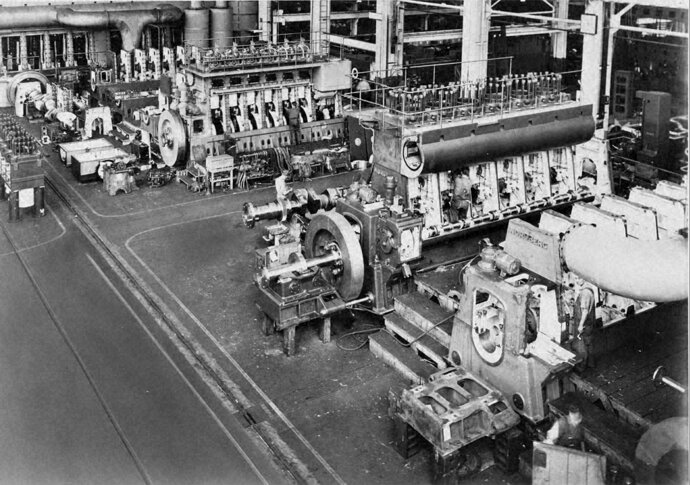 why did the USA end up throwing all of this away!

why did the USA end up throwing all of this away!

Just not competitive, got bought out by a Finnish company that made more money off rock crushers and stationary engines. Besides, wasn’t the biggest marine engine only 6,000 hp? Pretty low output for the amount of iron.

Besides, wasn’t the biggest marine engine only 6,000 hp? Pretty low output for the amount of iron

5850hp to be correct but remember the era? No turbo chargers on them engines…just a blower to provide scavenging air. what king of HP would this engine make if fitted with a turbo or two? 20000? 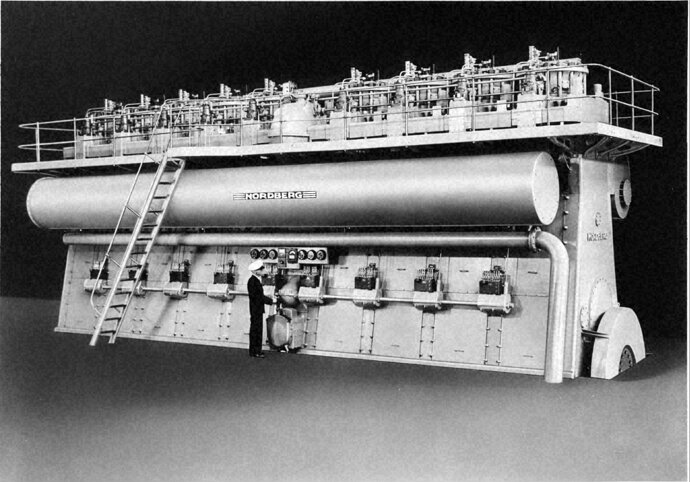 there was a reason Nordberg exited the marine diesel business and that was lack of orders. Not because of cheap foreign competitors but because all the many merchant vessels built in the postwar right up to right about 1980 were ordered with steam plants. the question is why? I still say it was the USN who pressured MarAd to make sure every ship built with CDS was a steamer. Remember, to get CDS you had to get approval for the ship’s design and machinery before you got the subsidy

One of the LASH ships used diesel, don’t know what kind.

Yes, a stationary engine that is actually still in fully operational condition and started up once a month to be ready in case of a major blackout of the grid. It is the first start device to get back in operation:

When I was OS on board Theben in 1961/62 we were told that the engine installed there was “the first marine diesel over 10000 HP installed on a commercial vessel”, but I have no proof of that.

It is a fact that IC engines are more efficient than the External Combustion engines. Hence we can clearly say that diesel engines are efficient ( about 40%) when compared to steam engines ( below 10%), 6% is not uncommon. One of the problems is that apart from the turbine you need a boiler and that is an inefficient piece of engineering due to large heat losses in and outside the boiler, pumps, piping etc apart from the losses in the reduction gearbox.

I got the information about the fuel consumption of the El Faro from the final NTSB report dated 1 February 2018, page 37, which I had missed until now.

I don’t know if the Brent 2015 price of $52.32 is the sales price to the ship owners, it seems a bit low to me. The vessel burned heavy fuel oil RMK50 of which I could not find the 2015 price, but then this just an exercise to show the financial consequences of using steam. I didnot calculate the engine room manning (14) costs which will be considerable higher on a steam then on diesel propelled vessel. The difference should be added to the fuel costs.

Even FOC, foreign built VLCCs and ULCCs were fitted with steam plants and operating well into the 90s. Most of them (if not all) that I surveyed at the Galveston Lightering Area back in the 90s were steam. Nice plants, too. Huge with air conditioned control rooms. . . . most built in Japan. . .

One of the LASH ships used diesel, don’t know what kind.

Several were built and and operated under foreign flag. Several come to mind. The Acadia Forest, Atlantic Forest, Rhine Forest, and the München (lost in a storm). All were built in the 1969/early 70’s. I believe they had 9 cylinder RND engines in them. The Atlantic Forest was re-flagged US and operated as the Jeb Stuart until she was scrapped.

The Sevmorput is a Russian built nuclear powered LASH.

I calculated the efficiency of Wärtsilä 31 based on BSFC and lower calorific value for fuel; it’s a hair below 50% for fuel oil and slightly above 50% for gas fuel. WinGD low-speed engines seem to hover around 50…55%. I wonder what you could get from a steam plant with the latest bells and whistles.