Helge Ingstad - Why did it sink?

Plenty people wonder why it took so long for Helge Ingstad; HI, to sink after the collision. It is suggested that some shaft seals in the HI watertight bulkheads were leaking in the hull. Well, if shaft seals are leaking filling the bilges sinking the HI ship, you should just start a bilge pump to pump the water out. Did Helge Ingstad have bilge pumps? Did the HI crew know how to start bilge pumps? Did the HI crew sound all compartments after the collision to establish the situation? Or does anywhere care about it? The ship sank! Nobody died. Or better forget the whole shit? I find it interesting to find out why ships sink.

Why did she sink? come on? - Not much to be said. They even leave the door open? 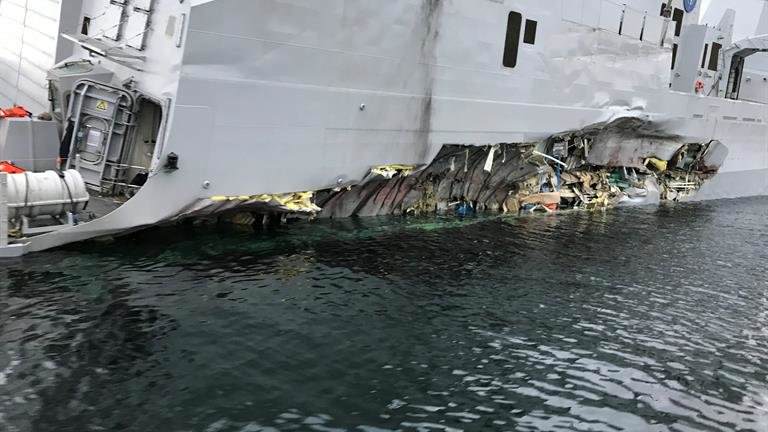 As I recall it was laying on its side on a rock shelf and they attempted to run wire ropes to the shore to secure it. Eventually it slid into the fjord. This seems like the most likely reason it sank.

Bilge pumps are only designed to pump out the bilges; they won’t cope with a large inrush of water.
Once the weight of water overcomes the buoyancy, down it goes.
I’m sat on my wooden boat which has developed a 10mm hole in the hull, right on the bottom planking. It is quite amazing how much water comes rushing in through such a small hole.
The main bilge pump is keeping well ahead of it now that I have stuffed the hole with rags plus I have 2 other bilge pumps standing by should it get worse.
Now all I need is a diver.

8 posts were split to a new topic: The Admiral wood boat with 10 mm hole

The sequence of events seems to be thus:

A bit of detail:

This has already been pretty extensively covered on here, so I can’t be bothered to dig up multiple english language sources.

Here is the video from the other thread.

I must say I like the HI blue watertight doors. Easy to open and swing open, etc

When I was in the navy gray was the preferred color!

Some water tight door, only one handle in the middle instead of four, two on each side of the door! I suppose that these are crew quarters. It looks likes a normal cabin door with door handle to me, complete with the good old emergency kick out panel below. You know, doors can get jammed with a collision and what a collision it was…

Blue watertight door with kick out panel! Yes, it is Norwegian standard.

Are those kick-out panels common? I know the Russian rules require them, but I don’t recall seeing them on most ships.

A watertight door with a kick out panel, that will be the day! This is getting better and better…

Are those kick-out panels common? I know the Russian rules require them, but I don’t recall seeing them on most ships.

On Dutch ships they were standard, but that is probably a local ruling, not international.

…Yes, it is Norwegian standard…

For a Suede, it is easy to attack the Norwegians, when the resident Norwegian specialist is momentary jailed and his more ancient second does not even think about a reply to a Suede…

Kick out panels in ship doors are useful when the ship has capsized and the door becomes the floor. You jump on the panel and drop down into the corridor below where you probably die trapped. If after capsize the door/panel is in the roof, you have a problem.

I had never seen those until I was onboard a Romanian buoy tender last year, where they took the form of little doors like dog hatches. I asked if they were for the cat, and they explained that they would allow the door to be opened if it was blocked by water pressure. Made sense at the time…

I have only seen them used as interior cabin doors and they are not required to be watertight but they should be fire resistant to a certain extent.