Haven’t heard of that one but this one is detailed account by an insider. “Cotton” Collier.

this book was first published in 2017 but i did not find the book you show as a reference in the bibliography, it may be your book here is too new? in either event, it’s late, i’ve had a few beers etc. etc. but i am saving this to reference later … this authors references and in person interviews with many ‘‘ex’’’ spys is extensive and covers many pages. it is simply impossible to assume the author (josh dean) would of been ignorant of its’ existance.

The Hughes Glomar Explorer is a story unto itself. I remember back to school days I had this one Algebra/Geometry Teacher who was all pumped up on this
and of course encouraging us that this (and his higher math) would be the future. I had seen a piece on TV that suggested the Glomar Explorer wasn’t what it was being painted up to be. It didn’t say a lot about it but it was enough to hint it was something “fishy”.

Then there was almost nothing more about it at all. Except this video piece that was showing up in the Board of Education’s “Media Centers” (where audio visual teaching resources were archived and teachers could get these resources to present to their students)

The math teacher must have been following it closely as he was all about manganese nodules and the impact of manganese on steel production etc etc.
In our school he thought he was the be-all end-all of modern education. (teaching “New Math”) A dashing good looking Italian fellow all of the women teachers swooned over.

But before long there was no news about the Glomar. All but gone and forgotten. Only those who saw this Film in the Science Classes were lulled to sleep and wouldn’t inquire into it as they had seen the film.

It was a long time before anyone heard anything about the K-129 and or the Glomar’s involvement in trying to retrieve it. As for the Math Teacher, he had left teaching to become a text book salesman.

Still when the K-129 retrieval story broke most people didn’t by that time even remember anything about the Hughs Glomar Explorer. Then it wasn’t a sexy 007 kind of story.

the dream is alive.

A former office exec was one of the project engineers. Last name escapes me but first name was Marty. 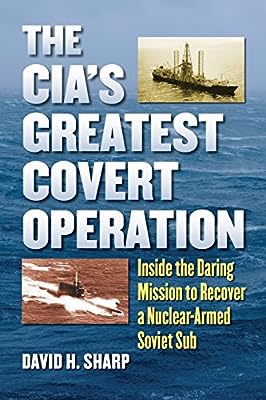 The CIA's Greatest Covert Operation: Inside the Daring Mission to Recover a Nuclear-Armed Soviet Sub


There is a web site also with lots of photos put up by ex staff on the project.
Honeywell made the DP system who then went into production and sold them.
They used acoustics and held in 17,000 feet

It was in the news when it got scrapped last year or so.

The Glomar Explorer went to Global Marine which converted it to a drillship which merged with Santa Fe Int. which merged to become Global Santa Fe [ a good company] which merged with Transocean [meh] and the ship remained the GSF Explorer until it went to the wreckers. It was a very well built ship, hull 2" thick and wing walls about an inch. Was supposed to be able to survive a torpedo attack and stay afloat. The Russian sailors who were recovered were given an honorable burial. Videos are available. Lots of history but a bitch of a drillship to work on. Antiquated in many respects but it made a LOT of money for Transocean who bought it from MARAD for 15 million while it was making over 500,000/day under contract. One of those sweetheart deals.
Additionally, the GSL Explorer was the ONLY US flagged drillship in existence when the Deepwater Horizon disaster happened. When some people in the US Congress started saying they wanted only US flagged drilling vessels in the USA those of us that knew the ship laughed. Talk about jumping from the frying pan into the fire! The only reason it was US flagged was because the US government still owned it. I think it was eventually reflagged to a FOC.

thx for the movie, that control room on the glomar looks WOW, even from 1973 or so!! still, the real spy story isn’t over yet, a friend pointed out that the journalist that ‘‘blew’’ the glomars real mission could of been silenced but wasn’t. I said, ““maybe they’d already offed so many that is was going to get discovered?”” he said, ""they could of bought him off, framed him for jail, given him a lombotomy, or any number of things so maybe the us did recover the code books and a missile for guidance systems info?? we’ll prob not know in our lifetime. in any event after the story became “open” the glomar wasn’t going to be able to go back to the site again. (if it needed to)??

I remember it when anchored with the Mothball Fleet up river from CMA.

Discover and learn about the mysterious and unique 'Ghost Fleet' of the Bay Area.

There was a lot of scrap value in the old GSF Explorer. Lots of quality steel, generators, titanium hx’ers etc., but the ship was insulated with asbestos which was normal for the time it was built so I am sure the wreckers got a discount. The original Nordberg engines were museum pieces but from my experience with them I hope they were melted down and recycled into a Mahindra or handles for Chinese made fly swatters.

Pence could have used a chinese fly swatter, but it would be inappropriate to not use USA designed and built apparatus.

I remember the SIU, probably unwittingly, became a party to the attempt to cover-up the activities of the Glomar Explorer after it was revealed by the New York Times in a story in February 1975. Right after the story broke, the SIU began printing stories in their newspaper the Seafarer’s Log about the big opportunities for U.S. mariners in the new industry of deep sea mining. I was in New Orleans in 1976 at a union meeting when the SIU’s Gulf Coast vice-president, “Buck” Stephens read us a lengthy bulletin about the deep sea mining vessels that were going to be built to scoop up the mineral rich nodules, which he kept pronouncing as “noodles.”

“YOU KNOW YOU*R A REDNECK IF: you can entertain yourself for more than two hours with a fly swatter” (From a calendar seen on a rig long time ago.

PS> Not sure if Pence has that long concentration span though.

The K-129 story is a cool accounting of sneakiness in the cold war. But for actual high impact, tactical value, I always loved the story of the Aleutian Zero.

Pence could have used a chinese fly swatter.

I don’t know how that pesky little black fly worked its way into this thread but rest assured, the democrats have it all under control. It was a set up to push the sales of swatters and help finance the campaign.

If you haven’t watched it, I’d recommend the documentary Azorian: The Raising of the K-129 . It was available on amazon prime recently. Interviews several of the engineers and deck crew involved and has some good footage.

Will have to watch that while my bride is asleep. Sounds like something I would enjoy.

One of the things that impressed me the most was the secrecy involved with the Glomar’s construction & deployment. It would compare with Lockheed’s “Skunk Works” and the building of the SR-71 Black Bird. The US put out a
world wide challenge in that time with a big financial prize for any other nation who could build an aircraft that could break Mach 3. Other countries like the UK stated simply that it couldn’t be done while other countries agreed with them.
(but the US was already doing it with the SR-71) So Intelligence deduced that since no one believed it possible that they were in the clear. Getting that kind of tight lipped dedication around a ship yard wouldn’t be so easy as at an isolated airfield or a place like Area 51. The only historical marker I can think of was in Japan during WW2 with the building of the Yamato battle ship. (super secret project then).