of course there is no really economical way to convert this 54 year old ferry to a small cruiseship but goddammit, I wished there was

It’s a sale of epic proportions: The price of the M/V Taku, an Alaska state ferry docked in Ketchikan, has been reduced by more than half.

Anyone hoping to own a ferry can now place a sealed bid on it for the low, low price of $700,000. That’s after the state found no takers at the initial $1.5 million price tag.

The state hopes the new price “will be more enticing to people that might be interested in owning a ferry,” said Meadow Bailey, spokesperson for the Alaska Department of Transportation and Public Facilities.

For more than 50 years, the Taku operated as part of the Alaska Marine Highway System.

But the 352-foot-long ship designed to carry 350 passengers was deemed too costly to maintain and exceeded the needs of the ferry system, DOT wrote in a release.

The state ferry has a fleet of 11 vessels, including the Taku. Two ferries under construction will come online in 2018. A replacement for the Tustumena, another state ferry vessel, is awaiting funding from the legislature.

Before putting it out to bid, DOT approached other state agencies and local governments, offering to give them the ferry for free.

“We didn’t have any takers,” Bailey said.

So the state opened it to bidders at a minimum price of $1.5 million. The sealed bid sale opened March 11 and closed May 9.

“We did not have any bids submitted by that deadline,” Bailey said.

old hull and machinery, non SOLAS, not enough cabins…just too many hurdles to give this ship another life

If she has a Car Deck that can be converted to Casion, she may get a new lease of life somewhere as a “Cruise-to-nowhere” gambling boat.

If she has a Car Deck that can be converted to Casion, she may get a new lease of life somewhere as a “Cruise-to-nowhere” gambling boat.

the day of those passed 20 years ago…all new casinos are land based. nobody wants them floating anymore even if permanently moored plus the market still has a whole shitpile of old casino boats still looking for new lives. there is one sitting right here in the Port of Tacoma which the owners can’t sell even for scrap.

Are you referring to the US market ONLY?
There is a wide world outside that may be different.

well TAKU has finally been sold…but to be a hostel! 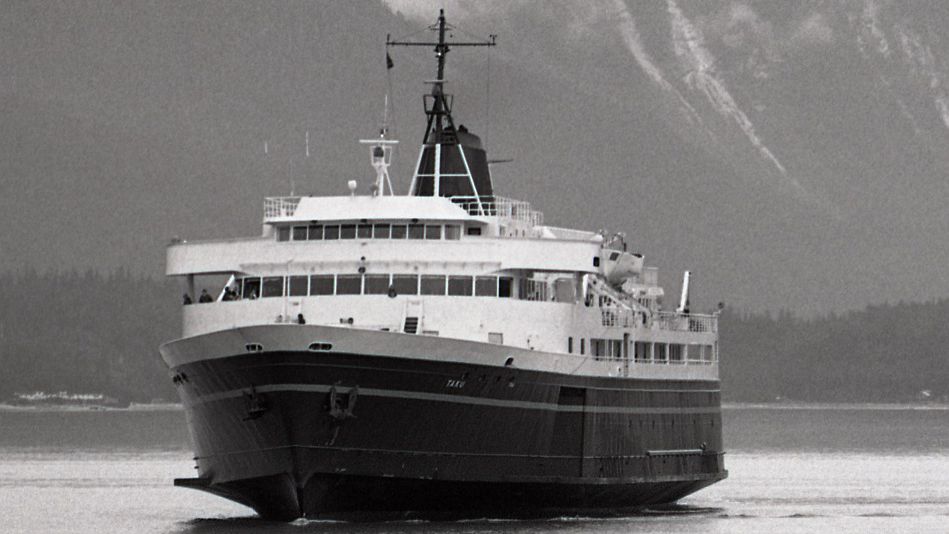 Alaska State Ferry to be Repurposed as a Hostel

The Alaska Department of Transportation has sold the aging ferry Taku to Portland-based hoteliers KeyMar LLC. According to buyer’s representative

M/V Taku arrived at Alang late April / early May 2018 and was beached. It is reported that she finished with her own engines.

How did she get there? I presume it must have been dry transport for the long trip and own engine for the beaching only?

The former Alaska Marine Highway System ferry Taku left Ketchikan Tuesday on what is either its final voyage, or toward its new life as a ferry in another part of the world.

About a dozen people gathered early in the morning at Ward Cove to wish the Taku farewell.

Ketchikan bagpiper Rob Alley serenades the 55-year-old ferry Taku on her last day docked at Ketchikan’s Ward Cove. The Taku has been stored there since 2015, when the state took the ferry out of service.

Alley said he wanted to be part of the Taku’s farewell journey because that ferry was how he – along with so many others – first arrived in Alaska. Alley said it was 1992.

“And we slept out on the deck coming up here. We migrated up from Bellingham (Wash.) and it was a momentous experience,” he said. “I think there were other people on board coming up for the first time as well. The Taku, she carried us up here. It was like a member of our family. I’m getting kind of choked up just thinking about it.”

The Taku began its service in Alaska in 1963. It has carried countless people moving to Alaska, like Alley. It also carried Southeast Alaska school groups and so many others, traveling between communities for competitions and events.

Alley said the Taku and all the Alaska Marine Highway System ferries mean so much to the region.

“It’s more than just a highway. It’s a superconnection between family members in one part of Alaska and another,” he said. “It’s not just about work and play; it’s about the family here that we have in Southeast Alaska.”

The Taku was taken out of service due to its age, along with maintenance costs and budget cuts. The State of Alaska decided to sell the ferry in 2017, with an initial minimum bid of $1.5 million. There were no takers, though, and the price dropped.

Jabal al Lawz Trading is the Dubai-based company that finally bought the Taku for $171,000. The sale became final in mid-January.

Company co-owner Ben Evans has said that the ferry is in great shape and they hope to sell it for further service as a ferry. Otherwise, it will be sold for scrap.

Capt. Bill Hopkins was among those watching as the Taku prepared to leave. He served on the ship in a variety of roles, and said he was a relief captain on board when the Taku made its maiden voyage to Bellingham.
“I remember we got to the dock down there, a big greeting committee from the Port of Bellingham. They presented us with a big plaque with a ship’s bell on it. Really nice,” he said. “We put that on the Taku, but years later a passenger stole it. It disappeared. Somebody has a really nice trophy from the Taku.”

Hopkins has sailed on the Taku as third mate, second mate and chief mate, as well as relief captain. He said watching the Taku leave is a sad day.

“Because it’s going to happen to our other vessels, too,” he said. “They don’t last forever. Almost, though. It’s been a long time.”

Sounding its horn, the Taku backed out slowly. Everyone on shore took photos or videos, and a drone flew overhead shooting aerial footage. The ship rotated in the cove to face the Tongass Narrows before heading out.

From Ketchikan, the Taku’s planned 11,500-mile trip will take her first to Seattle, then Hawaii before sailing to the Philippines, Singapore and India.

Shame they don’t have any newbuild mainliners to replace the aging fleet. I guess they figured the oil $ was never going to go away.

and another one bites the dust never to be replaced…

It’s not an equal comparison but the VA DOT is about to accept delivery on a new 220ft double ender ferry and the NC DOT has one 180 double ender and a high speed ferry being built with 2-3 more 180s going out to bid soon, and NYC DOT is building a few new SI ferries as well.