How many of you have seen, and ate flying fish? 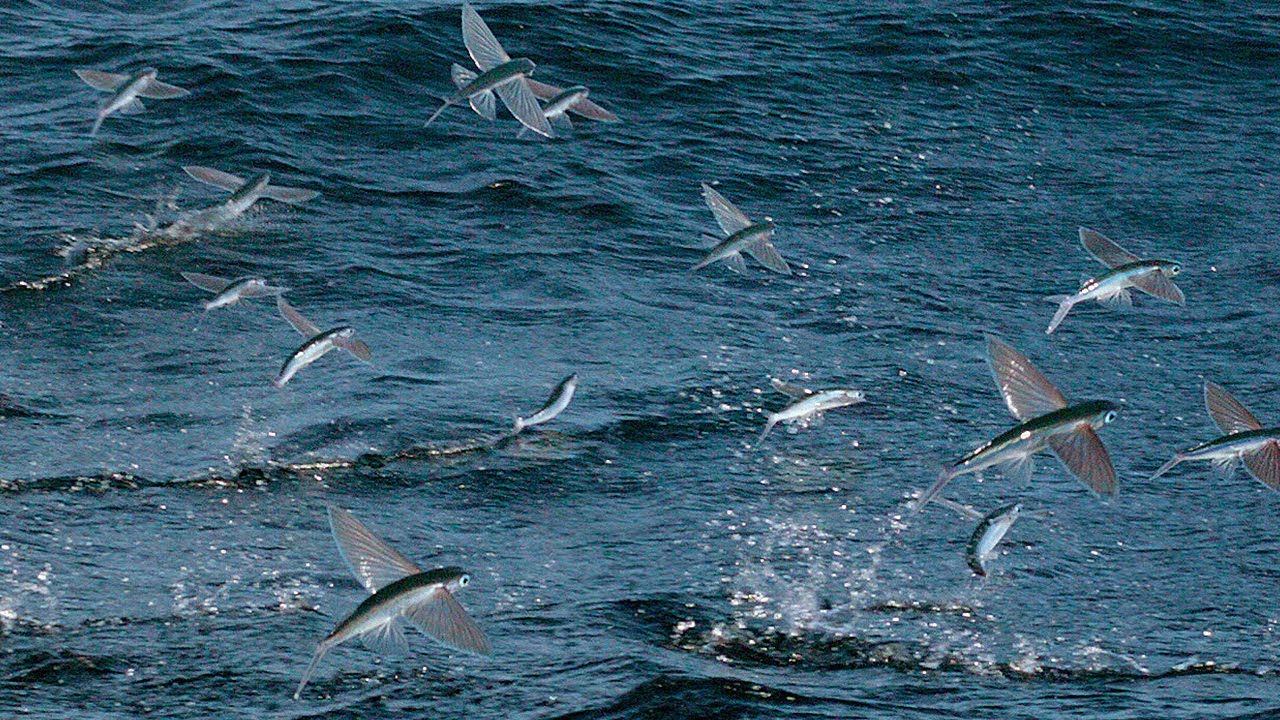 Seen thousands but never ate. Understand the taste is similar to sardines but I don’t particularly care for those either. I have seen them in various fish markets in Korea.

One way of catching them is while they are in flight, although usually they are caught by gillnetting or dipnetting.

You do not want to overcook them. So only like 1-2 minutes on each side with some oil and seasonings.

If deeply loaded (low freeboard) we would find them on deck.

Seen a lot, never tried one. They always struck me as kinda gross, but then again i love octopus and i bet lots have never tried those for the same reason!

They are attracted to lights. Often times you find them on the deck after they unknowingly commited suicide the night before.

Some of the more adventurous seafood eaters i have met in the past told me they are good smoked.

You don’t have to catch those. Just grab a couple off the deck head down to the galley try them or toss them back.

Those are not flying fish… Those are tuna. Just rig them up properly and toss them in the water and viola they will transform into tuna. It seems to make them angry when they transform so you might struggle a bit pulling them back onboard.

The first time I had flying fish was '74 off Reciefe Brazil. We were at anchor for 2 weeks. The flying fish were very large. The cook would stroll on the deck at sunrise with a bucket and pick up the freshest of the fish that landed under our bright deck lights. He would cook the fillets, plantains and eggs on the griddle. Outstanding breakfast!
I’ve had them in fish chowder and cubion. Also very good.

At daybreak on this lube oil tanker, with very little freeboard, the deckhands used to collect the flying fish. They were served fried at breakfast although some didnot care for that so early in the day. They were very tasty.

During daytime it was interesting to see those slender fish often flying from wave top to wave top. These beautiful creatures propelled themselves forward with their tail fins in the water. It was said that this was no pleasure trip but that they were hunted by other fish and so tried to escape.

A couple of times, when I was on string boats, I would find a flying fish corpse on the deckplates in my engine room in the morning. . . finding them on the main deck was a common occurrence. I have also eaten some. A common dish in Trinidad.

On a delivery of a slow boat from the Canal to Seattle we had many hours of nature film style viewing of flying fish being pursued by albatross in the Gulf of Tehuantepec.

It was incredible to watch, it looked like the old WW2 gun camera films of a fighter pursuing another close to the ground. Sometimes it would go on for hundreds of yards until the fish dived down and either the bird would break off or follow it into the water. When the bird surfaced you could tell if it got the fish or not by how it shook its head, if it flipped it up and down it got the bird (swapping tail for head to swallow) or just a side to side to shake off the water before launching again. It was mesmerizing.

The locals set fish traps for flying fish in Barbados. Palm leaves over a floating trap. They cut slits in the sides and pack the slits with some green paste. They actually were pretty good.

Haven’t eaten any, but I did get hit right in the face by more than one. If you accidently fold one up in a sail and put it below, you’ll be very unpopular in a day or so.

I’ve seen them many a time but never eaten one. Anyone tell me how to cook one ?

We just scaled them and fried them up with a little oil in the pan.

My father sailed for Mobil on an old T2 and said they ended up all over the well decks. Cook would scoop them up, clean them and serve them.

He loved the food on those Mobil ships.

We just scaled them and fried them up with a little oil in the pan.

I’m sold. Gonna venture outside my comfort zone and try some flying fish next time the opportunity arises.

Butter is even better. Lots of bones, but the meat peels off them pretty easily and is darn tasty.