The USS Cole was transported on the Blue Marlin, which was owned by Offshore Heavy Transport (OHT) a Norwegian company, before being sold to Dockwise a couple of years later. Her she is in OHT colours and with the Cole on deck:

I was MWS while loading Power barges on her in the Philippines and Singapore a few months later and the Chief Mate loved to tell about the paranoia that transpired, first during the loading operation off Aden. (To shallow to do so inside the harbour)

Their last load had been two USN Mine Hunters from the States to Bahrain. (With a contingent of Navy personnel as “riders” on the B.M.) But apparently the Navy had forgotten to tell the CIA contingent that was sent to protect the loading operation that this Norwegian ship had a full crew of Russians.

When the Mate went on the Tannoy to give some instructions to his crew in his most commanding Russian voice, the CIA guys apparently got shocked and was looking rather confused and bewildered.

Again, when they got to Pensacola, Fl. somebody wanted to ban them from entering the harbour. She had wait outside until it was explained that the only place in the vicinity with water depth enough to submerge for discharge was a deep hole dredged for the purpose near the Naval Base, where the BM had loaded rigs several times before.

Both Dockwise and OHT still use Baltic Russian crew, many of whom have been on these ships for decades and are very skilled in the complex operation that is regularly performed by these highly specialized vessels.

BTW; Dockwise and OHT are the two companies from NATO countries that have the vessels and skills to perform such transports.

BM in Dockwise colours and after jumbonizing, here submerged to maximum for loading the Noble Jim Day at first daylight. (Singapore, Sept. 2009):

The loadout weight was 42000 m.t. but transport weight was 44,300 m.t. after bunkering and taking the thrusters back on board. (carried on deck)

NJD on deck after loading and ready to depart, bound for Curacao via Cape:

BM with a load of River Barge hulls (“casco”) from China to Rotterdam:

Here is one of the COSCO vessels with a Large Offshore vessel hull on deck:

XIANG_RUI_KOU.jpg800×600 35.7 KB
The hull was transported from China to Norway for completion.

THE PENTAGON — The cost to repair stricken destroyer USS Fitzgerald (DDG-62) will easily be more than the $250 million the U.S. Navy paid to repair USS Cole (DDG-67) after it suffered a 2000 terrorist attack in Yemen, USNI News has learned…

While it’s too early to craft a complete repair estimate, several naval analysts told USNI News a $500-million bill to fix to the warship was not out of the question…

The service is also debating on how to get the DDG back to the U.S. for repairs, though a heavy-lift ship transporting Fitzgerald to the West Coast is the current favorite option in Navy leadership circles… 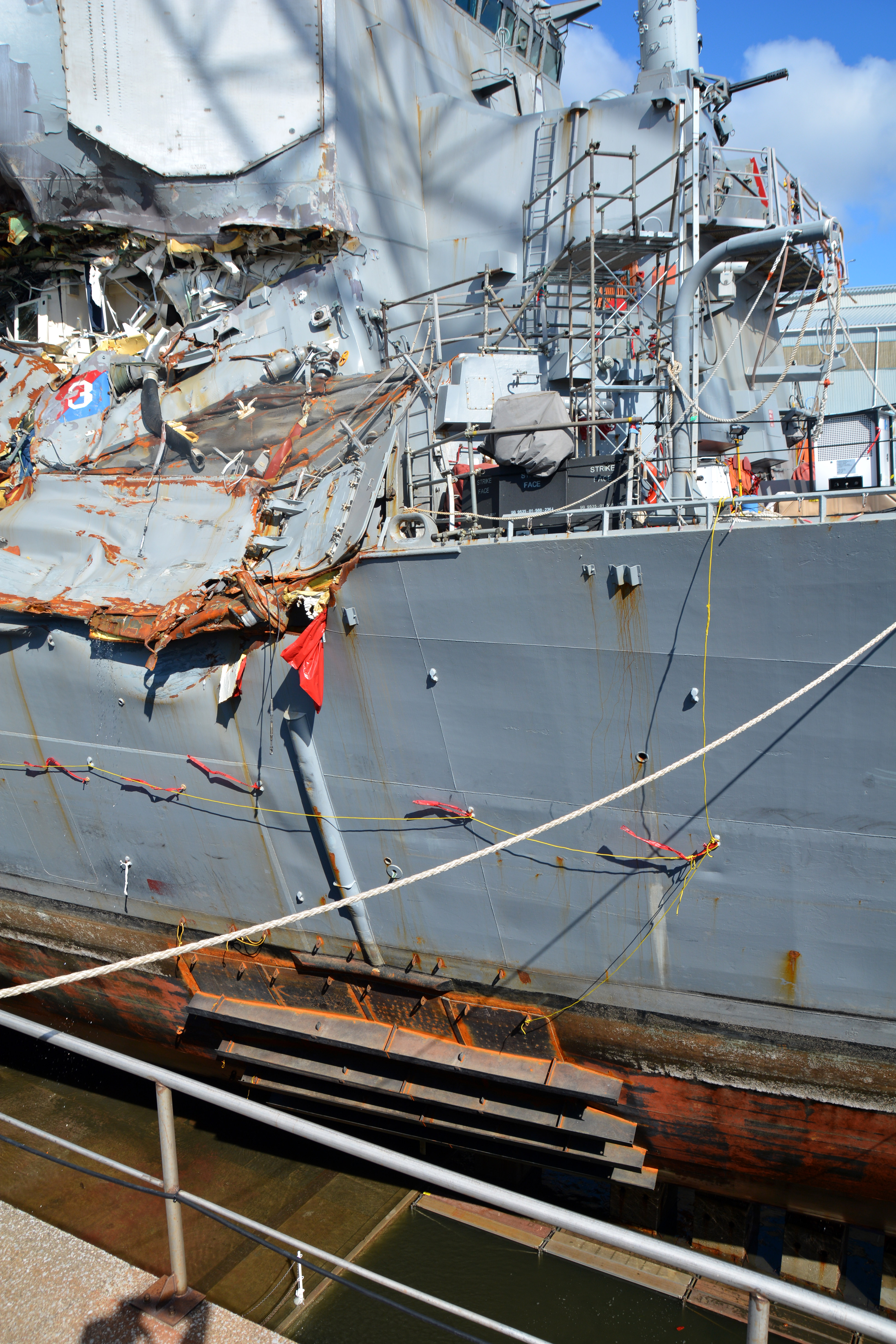 Repair for USS Fitzgerald After Collision Will Cost More Than Fix to USS Cole...

THE PENTAGON — The cost to repair stricken destroyer USS Fitzgerald (DDG-62) will easily be more than the $250 million the U.S. Navy paid to repair USS Cole (DDG-67) after it suffered a 2000 terrorist attack in Yemen, USNI News has learned. While...

Scrap the thing and put its wheelhouse on the lawn of the naval academy as a memorial to incompetence.

They already had something like that. Nothing can be done to defeat incompetence. Unfortunately, dumbassness runs in the genes of some family lines.

The Fitz may come back to the US …

On Tuesday, the U.S. Navy said that it has decided to transport the damaged destroyer USS Fitzgerald back to the United States aboard a heavy lift

Because foreign flag heavy lift ships get paid big bucks to haul the wreck home, local shipyards get fat contracts for the rebuild, and admirals get to say their kids didn’t total the family boat. It has nothing to do with wise management of the public purse.

The repairs will probably include upgrades that need to be tested for the rest of the fleet, why not do it on something that’s already broke instead of pulling an operational asset out of the fleet?

She was coming up on an already funded long shipyard availability to SLEP her so they’ll roll that work in to the repair too.

Probably will result in the cash coming from a different pool of money as well.

Also it “Maintains shipyard repair capabilities”, or something.

You make some good points, except the Fitz is no longer an operational asset, it is a huge liability.

I was thinking that all of the functioning parts of the Fitz could be moved over to the new hull in the manner of rotable spares and knock another huge percentage off the cost. The already funded “long availability” costs could be transferred as well and further reduce the cost of building a replacement and will still feed the yards.

So an American company has been contracted to transport the Fitz on a Dockwise vessel for USD 3.1 Mill.: http://gcaptain.com/navy-awards-3-1-million-heavy-lift-contract-for-uss-fitzgerald-transport/?utm_campaign=Roost&utm_source=Roost&utm_medium=push

I just wonder how much the middleman is getting and how much is actually the Dockwise costs??
Besides, curious that an originally Russian owned vessel with full Russian crew has been assigned to do this transport.

I just wonder how much the middleman is getting and how much is actually the Dockwise costs??

Good questions. The cost doesn’t look out of line though. It costs a couple of hundred thousand to ship a 40m yacht from Florida to the Med and Dockwise loads the ship with about 8 of them and fills the gaps with smaller boats so probably gets between 2 and 3 million per trip. Who knows what the broker got, I don’t think normal tariff rates apply to Department of Defense cargoes but I would think Patriot made 5 percent or maybe more.

Maybe someone with inside information will chime in, it would be interesting to see the actual numbers.

It is kind of humorous in a twisted sort of way that the navy’s excuse for not using AIS is to hide the ships from nasty prying foreign eyes but loads it for a few weeks voyage on a Russian crewed vessel.

They probably only had two choices: Russian or Chinese crew, since all the HLV are crewed by one of those nationals. (Russians are most Baltics, many with Estonian Passport)

Cost of dry transport is dependent on market forces and availability. Right now there are a lot of vessels of a type and size able to carry the Fitz in the market, so the cost should be relatively low, but there may be some special requirements involved that we don’t know. (probably never will??)
I would expect Pioneer to make a nice bundle from this one, with a minimum of involvement.

I agree. Scrap it and add a new Flight III Burke with all the upgrades to the end of the line. The Fitz will have to have every single piece of equipment aboard recallibrated and recertified. Take what is salvageable off of it and use those on a new ship.

See they have fixed the Transshelf for the job:

The download center is a collection of our publications, brochures and sheets, all available in a downloadable format such as pdf.

With a beam of 40.6m Panama clearly out so Suez.

Will they piggy-back the McCain?

There is enough deadweight?

With a beam of 40.6m Panama clearly out so Suez…

The new Panama locks allow a beam of 49 meters.

Yep, but with the sonar dome hanging over the side the beam is larger. 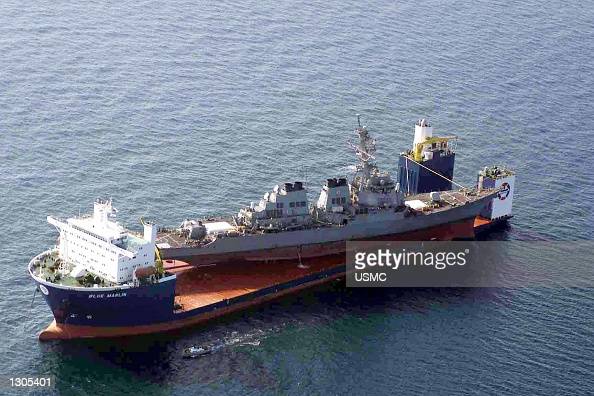 The USS Cole is lifted by MV Blue Marlin, a Norwegian dry dock vessel, off the coast of Aden, Yemen, October 31, 2000. The American destroyer USS Cole was bombed by suspected terrorists in the port of Aden, Yemen October 12, and was towed to MV Blue...

The Transself has narrower caissons aft so maybe the plan is to centerline the Fitz with the dome over the rear.

Perhaps the USN ought to have ready made cradles and cribbing for their most numerous vessels?

See they have fixed the Transshelf for the job:

With a beam of 40.6m Panama clearly out so Suez.

Will they piggy-back the McCain?

There is enough deadweight?

The new Panama locks have a max. allowed width of 49 m. so that should be possible, provided they don’t have overhang over sides (Propellers over one side, sonar dome over the other): http://maritime-connector.com/wiki/panamax/

Transshelft is LRS Ice Class 1D, so NWP is also a possibility up to end Oct. or so.

As for piggy backing, that would be difficult on the relatively small Transshelf, with Deck Space [L x B] 132.00 x 40.00 md)
As far as I can see the Fitz is 154 m., which means there will have to be overhang over the stern at least. (Most likely both stern and sides)

PS> This transport went via the Suez Canal.

Transshelft is LRS Ice Class 1D, so NWP is also a possibility up to end Oct. or so.

In the Baltic Sea, that’s not even a recognized ice class (it would be classified as “ice class 2” or “steel hull and independent propulsion”) together with other ships that are not barges or wooden sailing vessels.

Yes it is the lowest Ice Class, but what is the requirement to traverse the North West Passage in Oct.?