That would admit failure.

Ice class 1D would be equivalent to “Type D” which is not allowed to transit the NWP at any time of the year (as any route would take it through one or more of Zones 1 to 6).

Page doesn’t want to open, but I take your word for it. Thanks.

USS Fitzgerald damaged again during transport. She sustained two new punctures in its hull while it was being loaded aboard a heavy lift transport vessel, the Transshelf.

Some luck she has…

The JSM damaged during transport and the Fitz damaged during loading, what the hell is going on??
I realize that these destroyers are built to be light and not armoured, but at least they should be able to take normal transport load, even with some local damages to the hull structure.

I have not seen any report or picture from Dockwise or by any heavy lift experts on these incidents. The reports quoted here and found in Marine Executive: 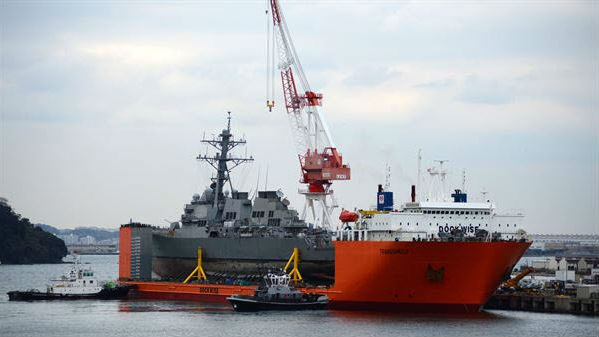 The USS Fitzgerald suffered two punctures to its hull on Sunday while being loaded onto the heavy lift ship that was to take her?from Japan to the


Those are all talking about the damage to the Fits being caused by “steel structures” on the Transshelf, which presumably refer to the cribbing/saddle arrangement to support the Fitz on deck.

In my experience there are ALWAYS wood or rubber between any steel structures and the hull of the cargo, NEVER steel to steel.

Due to the hull shape of a destroyers it is necessary to create a “saddle” shaped to support the cargo during transport. This will be constructed from steel supports, but ALWAYS cover with wood and shaped . to fit the curvature of the hull and ALWAYS placed to be directly in line with major frame structure of the cargo.

I obviously do not know what was the case here, but I found this picture of the saddle arrangement on the MS2 when loading a similar cargo. the frigate USS Samuel B. Roberts from Dubai to Rhode Island in 1988:

In this case they appear to have used standard “seafastenings” covered with 12x12 hardwood, which is standard materials carried on all HLVs.
Here is some seafastenings laid out and ready and cribbings made up of 12x12 hardwood on the deck of HLV Black Marlin before loading the Seafox 5 in Singapore in 2012:

Unless the drawings supplied to make the cribbing and saddle arrangement was wrong, or the cargo was placed wrongly, there should not be any excessive stress on the hull plating during loading.

Generally when a ship is in an evolution like this, it’s not the Navy running it either. It all gets contracted at to whatever company, then just has a couple Navy people there to keep an eye on the ship.

Transport is different from ordinary dry docking, but yes, as said earlier ALWAYS with wood used against the hull.

Generally when a ship is in an evolution like this, it’s not the Navy running it either. It all gets contracted at to whatever company, then just has a couple Navy people there to keep an eye on the ship.

That is correct. According to the standard contract for heavy transport (Heavycon) during loading the responsibility change when the cargo is 50 m. from the HLV, or first line attached, whichever comes first.
It is, however, the responsibilities of the cargo owner to supply correct information and drawings to the transport company in order to plan the support and sea fastening arrangement and to ensure that the cargo is in all respects ready and prepared for transport.
Any damages are usually “knock for knock”. (I.e. each party bears responsibility for any damages to own vessel):
https://www.steamshipmutual.com/publications/Articles/KnockforKnock1113.htm

Damages do occasionally occure during loading, discharging and/or transport, but structural damages, like appears to be the case with both the Fits and JSM, is usually because the information received have been inaccurate, or inadequate.

In my many years of experience with loading/discharging on HLV/Barges I can recall two fairly recent incidents where this caused damages. One was the where the thrusters where extending further below baseline than informed, causing them to make contact with the deck plating and another where leg protrusion was in excess of what was informed. (Both were wind farm vessel newbuildings)
Here is the solution to the first incident:

The US Navy is certainly helping to keep the unemployment down in Alabama:

USD 250 Mill. worth of contribution is not bad (for Alabama)