Are you saying that ALL Asian pilots are bad at piloting their planes because they are Asians? That sounds a bit racist!!!

I presume that if they migrate to Oz, gets an Aussie passport and fly for Qantas they become better at it?

its all about the training, the Japanese do it very well

What is it about training, experience, and cultural differences that you refuse to acknowledge exist?

The training and experience of most western pilots, Americans in particular, is so far different than that of Asian pilots as to hardly compare. Most American pilots were motivated by an intense interest in aviation and for the most part worked their way up a very steep and slippery ladder to the cockpit of an airliner.

With regard to Oz, do some reading on the reason why Quantas has one of the best safety records in aviation. 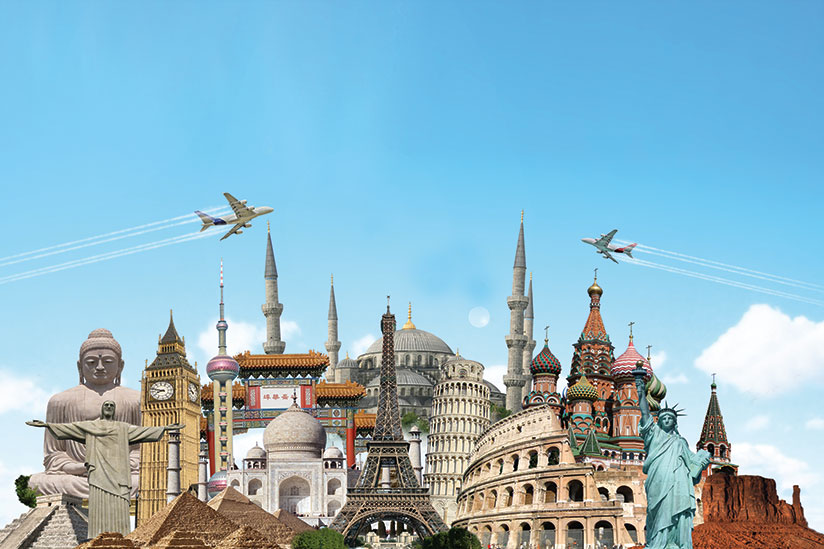 I presume that there are American and Australian Pilots of an Asian origin, since both natitions are an ethnic hotchpotch.

Besides, there are a mixture of nationalities and ethnicities among the pilots that fliers for most airlines.

I accept that different training and experience makes a difference, but that the colour of your skin, your passport, or ethnicity automatically make you a better (or worse) pilot I refuse to accept.

I have no experience of flying, except from the cabine, but I have plenty of experience from the marine and oil & gas field. Nothing in my experience indicate that race, religion or nationality make any difference to their capabilities.

Culture, education and training does though, but that applies everywhere and in any profession.

I would agree with that Bug, in a big way.

Since when was Japan not part of Asia, which would make Japanese…Asians?

I accept that different training and experience makes a difference, but that the colour of your skin, your passport, or ethnicity automatically make you a better (or worse) pilot I refuse to accept.

That’s nice but it is a lame attempt at obfuscation. No one here, ever, except you has ever said squat about skin color in relation to the cultural context and component of aviation safety. It is rude to try and project your own supremacist Scandinavian rhetoric to the conversation.

Let me try one more time to get it through to you - it is the CULTURE in which a pilot is raised, trained, and gains experience that determines the level of safety he or she brings to the job. As evidenced by many aircraft accidents and has been well documented in many aviation safety studies, Asian pilots are more prone to driving perfectly good aircraft into the ground than Americans, Brits, and Australians of any skin color.

Some of the early studies on the relationship between safety (including marine safety) and nationality were conducted by Scandinavians, your own countrymen discovered that the more fatalistic view of life held by southeast Asians was a factor in reduced safety. Look at work by Hvold and Nesset, and Oltedal before trying to play the color card in this arena.

Perhaps I missed something, anyone is capable of driving a perfectly good aircraft into the ground. Or not so perfect aircraft. It is the intensive training by whatever carrier provides and the responsible culture of that training. No matter where they are from. I quit flying many years ago. I may, but not planning on it anytime soon.

Culture, education and training does though, but that applies everywhere and in any profession.

I DID include CULTURE in the things that can make a difference.
Maybe you missed that? (It was at the bottom of the post, after all.

I DID include CULTURE

Yes, I saw that but you obviously don’t understand what it means in the context of aviation and marine safety or you wouldn’t have spent so much time writing about skin color, race, or religion. The fact that nationality (when the subject was raised, trained, and educated in a particular nation) is a major source of culture seems to have escaped your notice as well.

There are American pilots flying for Asian airlines and Asian pilots trained in the US . In fact it is much like the Marine industry, international in nature.
That being American,or any other nationality, makes a difference to your ability to fly airplanes (especially modern commercial airliners) is utter rubbish in my opinion, as is that it make any difference when it comes to seamanship.

In today’s reality who is American, Aussie, or any other nationality, is fairly indifferent. Educational levels and formal training is to a large extent equal in most cases

Cultural differences exists and I should know more about it then most, having lived and worked with people of different cultures all my working life. (60 years)

That is different from working closely with Americans only (maybe of different ethnic backgrounds, but still Americans)
Visiting foreign ports for a short time and even meeting people of different races and nationalities, but always with an American bias and point of view.

Ooops, now I’m going to be accused of anti-Americanism again. I should learn that speaking the truth is not very popular.

is utter rubbish in my opinion

That is because you don’t know what you are talking about.

Go find another subject to troll.

Bug , you had me until that last post you put up.

an American bias and point of view.

What does this mean? All Americans have the same point of view?

No, thanks heaven not. But there is a general trend, especially in matters concerning foreigner, foreign countries and anything involving foreign policy.

It is very much dependent on what you grew up with, what you have learnt through formal and informal sources and what you have been told to believe by media and by “popular believes”.

Some learn from experience, by interaction with foreigners and by travelling, or living and working in foreign countries, that not EVERYTHING you have been told is the truth. (I went through that process when I went to sea and got to see the world for myself)

But some take their biases with them on their travel and never bother to learn. Or they travel and live in a “bubble” with only people of the same nationality and with the same biases.

I don’t say that this ONLY applies to Americans. I have met many (both Americans and other) that fit that description.
Of course there are exceptions to all “rules” but “in general” that description fits a lot of seafarers and oil field hands (of different nationalities) that I have met and worked with the last 60 years. (Not to mention tourists)

PS> I expected more push back and comments to prove my statement. 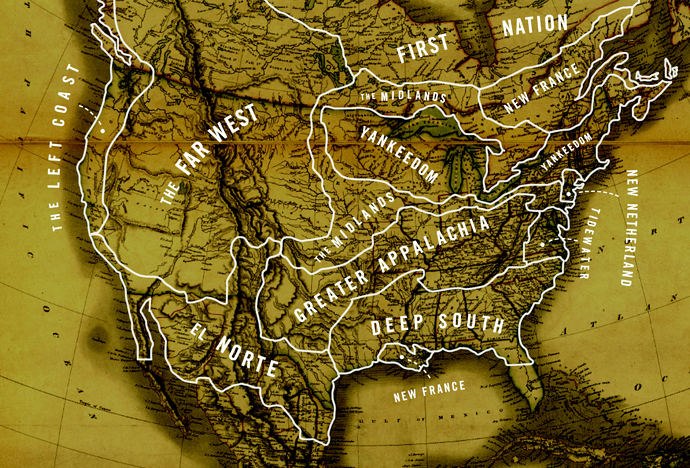 A Geography Lesson for the Tea Party | Washington Monthly

Even as the movement’s grip tightens on the GOP, its influence is melting away across vast swaths of America, thanks to centuries-old regional traditions that few of us understand.

our country has never been united, either in purpose, principles, or political behavior. We’ve never been a nation-state in the European sense; we’re a federation of nations, more akin to the European Union than the Republic of France, and this confounds both collective efforts to find common ground and radical campaigns to force one component nation’s values on the others. 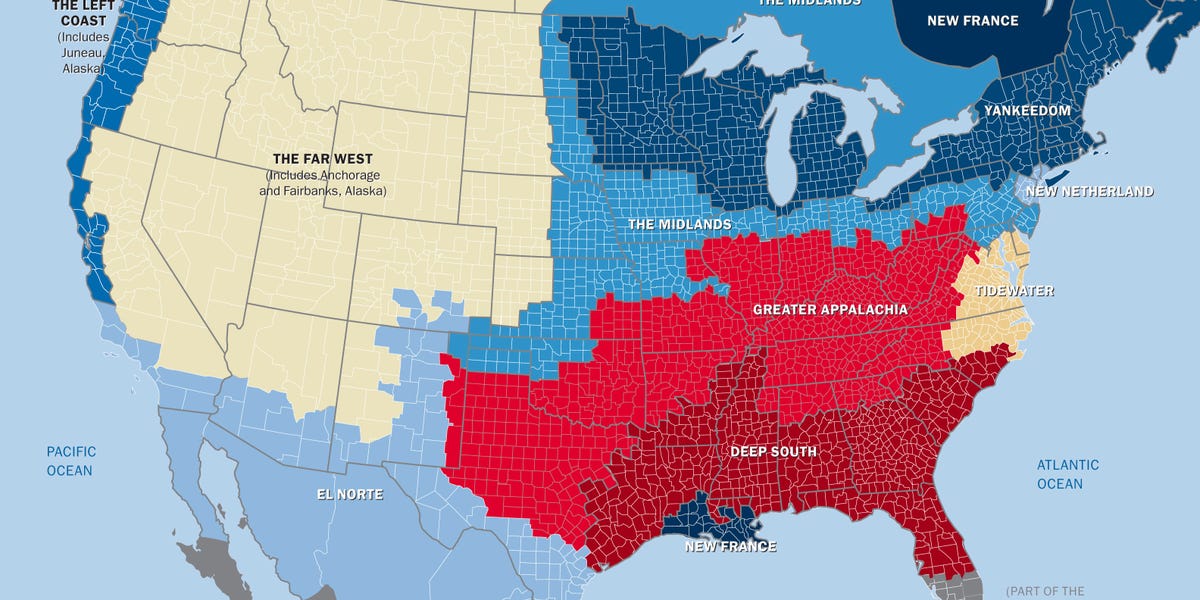 This map shows how the US really has 11 separate 'nations' with entirely...

From the utopian "Yankeedom" to the conservative "Greater Appalachia," looking at these cultures sheds a light on America's political divides. 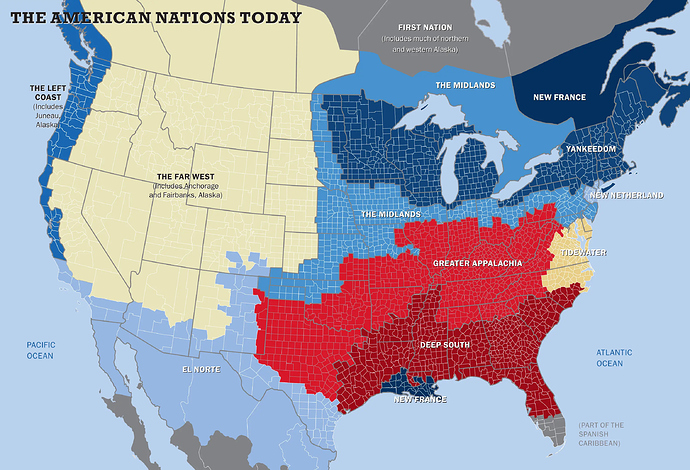 I live in Yankeedom

Yankeedom
Founded on the shores of Massachusetts Bay by radical Calvinists as a new Zion, since the outset Yankeedom has put great emphasis on perfecting earthly society through social engineering, individual self-denial for the common good, and the aggressive assimilation of outsiders. It has prized education, intellectual achievement, community (rather than individual) empowerment, and broad citizen participation in politics and government, the latter seen as the public’s shield against the machinations of grasping aristocrats, corporations, and other tyrannies. From its New England core, it has spread with its settlers across upper New York State, the northern strips of Pennsylvania, Ohio, Illinois, and Iowa, parts of the eastern Dakotas, and on up into the upper Great Lakes states and Canada’s Maritime Provinces.

Which in 1861 went to war against The Deep South - the rest of the country picked sides.

The Deep South
Established by English slave lords from Barbados as a West Indies-style slave society, this region has been a bastion of white supremacy, aristocratic privilege, and a version of classical Republicanism modeled on the slave states of the ancient world, where democracy was the privilege of the few and enslavement the natural lot of the many. It spread apartheid and authoritarianism across the southern lowlands, ultimately encompassing most of South Carolina, Georgia, Alabama, Mississippi, Florida, and Louisiana, plus western Tennessee and southeastern Arkansas, Texas, and North Carolina. Its slave and caste systems smashed by outside intervention, it continues to fight for rollbacks of federal power, taxes on capital and the wealthy, and environmental, labor, and consumer safety protections.

We’ve never been a nation-state in the European sense; we’re a federation of nations, more akin to the European Union than the Republic of France , and this confounds both collective efforts to find common ground and radical campaigns to force one component nation’s values on the others.

That is undoubtedly true; the United States have never been a nation state, or truely united
It is a hotchpotch of people with roots from all over the world, where the majority(still?) can trace their ancestry to many different nationalities and ethnicities. (Maybe with the exception of the Cajuns ?)

PS> The European nation states are not that uniform any more, with a lot of movement between European nations and a large influx of people from other parts of the world in the last 70 years.

many different nationalities and ethnicities.

Not necessary. Mostly English. Did you read the article?

New Netherland
Established by the Dutch at a time when the Netherlands was the most sophisticated society in the Western world, New Netherland has displayed its salient characteristics throughout its history: a global commercial trading culture— multiethnic, multireligious, and materialistic—with a profound tolerance for diversity

The Midlands
America’s great swing region was founded by English Quakers, who believed in man’s inherent goodness and welcomed people of many nations and creeds to their utopian colonies on the shores of Delaware Bay. Pluralistic and organized around the middle class

Tidewater
Settled in many cases by the younger sons of southern English gentry, Tidewater was meant to reproduce the semifeudal manorial society of the countryside they’d left behind, where economic, political, and social affairs were run by and for landed aristocrats.

Greater Appalachia
Founded in the early eighteenth century by wave upon wave of rough, bellicose settlers from the war-ravaged borderlands of northern Ireland, northern England, and the Scottish lowlands, Appalachia has been lampooned by writers and screenwriters as the home of rednecks, hillbillies, crackers, and white trash.

The Deep South
Established by English slave lords from Barbados as a West Indies-style slave society, this region has been a bastion of white supremacy, aristocratic privilege,

El Norte
The oldest of the Euro-American nations, El Norte dates back to the late sixteenth century, when the Spanish empire founded Monterrey, Saltillo, and other outposts in what are now the Mexican-American borderlands.

The Left Coast
A Chile-shaped nation wedged between the Pacific Ocean and the Cascade and Coast mountain ranges and stretching from Monterey to Juneau, the Left Coast was originally colonized by two groups: merchants, missionaries, and woodsmen from New England (who arrived by sea and dominated the towns); and farmers, prospectors, and fur traders from Greater Appalachia (who generally arrived by wagon and controlled the countryside).

The Far West
The other “second-generation” nation, this is the one part of the continent where environmental factors trumped ethnographic ones.

There are better ways to organize regions of the US than by the current arbitrary state lines. 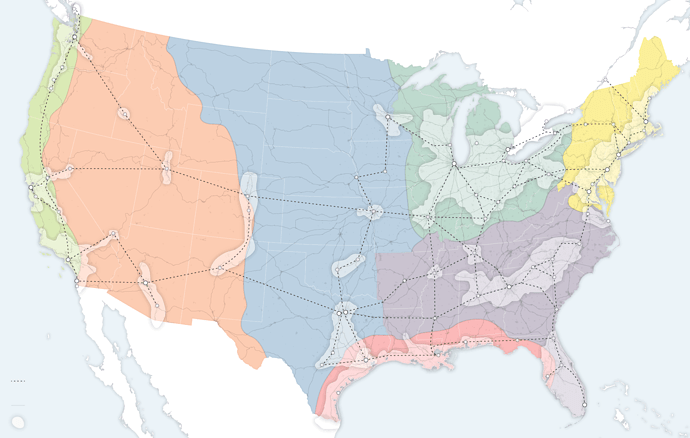