Containership Rena aground on well known reef in New Zealand

It is still early going but already the pundits are putting their two cents worth in as to the cause.

Given the time of the grounding (2.20 a.m.) and the location (Astrolab reef) - very well indicated reef …my two cents. The navigator was not navigating. There are usually only two reasons for this:[ATTACH]1383[/ATTACH]

There are a few other options, which may also please be considered:-

I vote for option #1. However, it is too early to tell if “the bow fell off.”

crew/officers communication breakdown on this ship.

The captain was just arrested

The captain of the stricken cargo ship Rena has been arrested, as 70 containers fell from the heavily listing boat into the ocean overnight, Fairfax-owned news website Stuff reported Wednesday.

The loss of the containers was reported to Maritime New Zealand by New Zealand Navy ship Endeavour Wednesday morning, it said.

The Rena, a 47,000 ton cargo ship that grounded on the Astrolabe reef off Tauranga Oct. 5, is now tilting up to 18 degrees to the port, or left, side, the website reported. A MNZ spokesman said the ship’s cargo of containers was looking very unstable on that side. Some 1,357 containers remain on board.

The captain of the ship has been charged under Section 65 of the Maritime Act and would appear in court this morning, Environment Minister Nick Smith said, according to the report.

Yes, it certainly didn’t take long to criminalize the Master. An easy scapegoat – but I’m sure the NZ investigation will bring to light the real root cause of this tragedy. My money is on fatigue.

How it can be the Master and 2nd Officer’s fault when the schedule for the MSC Capricorn Service was and still is 10 ports in 13-14 days, is beyond me. The people making these schedules may or may not have been seafarers but they were and are certainly aware of the regulations pertaining to working hours onboard ships. Just because they were or are charterers does not in any way reduce their culpable liability.

Likewise, any port state authority person with the least bit of common sense could and should have taken suo moto cognizance of these schedules, they didn’t. So now, who bells the PSC cat here, or do we just crimilaise the seafarer again?

My views and the relevant links can be found here:-

And what do we have to say about the accountabilities of the entities who made the schedules, brutal and rigorous, 10-11 port calls on 13-14 days? http://matescabin.blogspot.com/2011/10/mv-rena-msc-chartered-ship-for.html . . .please do take a look.

That is exactly right Matescabin - if fatigue does turn out to be a contributing factor in this accident, so must upper management be brought to account on account of crewing and schedules. But so too should the entire ‘system’ that continues to allow lean crewing that contributes to fatigue.

There are many similar accidents to choose from if one wishes to learn these lessons - but instead of proper manning and enforcing work/rest rules, authorities persist on initiating other nefarious ‘defenses’ such as bridge watch alarms :mad:

Getting close to breaking in two…notice how the crack now is going below the waterline. 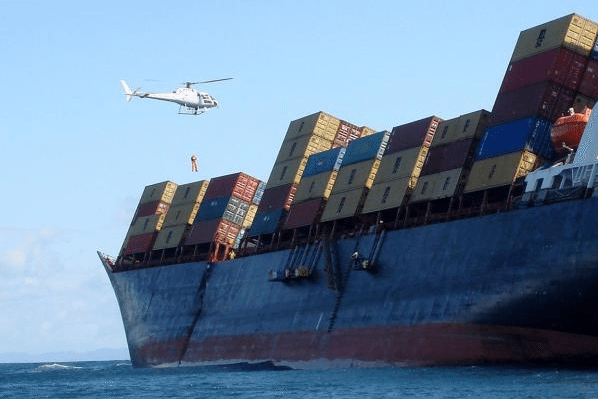 This why this is eventually going to happen. Yup - she is finished for sure. They will be picking up the pieces for the next 12 months… à la CP Valour.

Incidents like this happen when “someone” knows a short-cut to save 10minutes.

In my opinion - the OOW didn’t want to save time - he most probably fell asleep due to long, hard days and not enough rest. Company practices, schedule, crewing - these are the shortcuts.

Thought I read it was the captains birthday? Maybe they were having a party!

I am going to guess that some error was made with a waypoint. Somehow a waypoint on some electronic navigation device was either deleted or someone advanced to the next waypoint prematurely and the mate was simply steering for the next waypoint using a single source.

I read about it last Oct in “The Old Salt Blog” but never saw the follow-up pics.
Sad ~ Liberian Flag vessel