On July 24, 1915, nearly 900 people died when SS Eastland capsized in the Chicago River. It was a particularly astounding loss of life considering that, unlike in most deadly shipwrecks, the calamity occurred only 19 feet from shore in the middle of a metropolis. On the anniversary of the SS Eastland catastrophe, look back at the deadliest disaster in Chicago history. 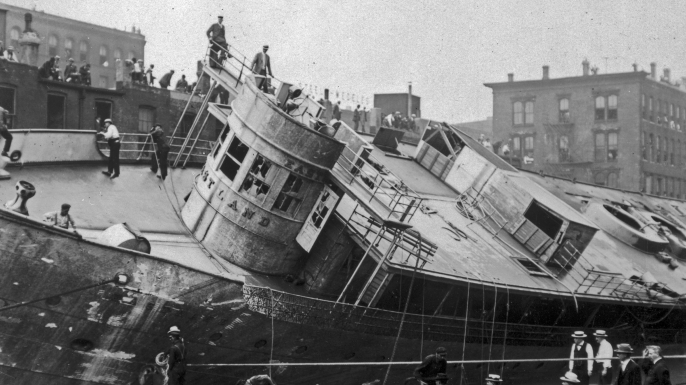 On the centennial of the capsizing of SS Eastland, which claimed 844 lives, look back at the deadliest disaster in Chicago history. 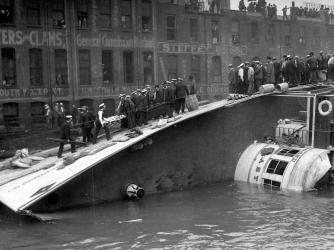 With some video narration, and lots of pictures.

Officials of Reid, Murdoch & Company, a wholesale grocery firm, approved the use of their building for the rescue and relief efforts. The building, located directly across the Chicago River from the scene of the accident, was untenanted on July 24, 1915 because Reid, Murdoch & Company employees were attending their annual company picnic. The basement and first floor were opened for the relief efforts. Operators quickly secured the telephone switchboard.

Those who were clinging to life were taken to the first floor for treatment. The deceased were numbered and brought into the large, cement basement where volunteer embalmers were already at work. Police carefully searched the victims’ bodies for valuables and identifications, placing all papers and other articles in large envelopes.

Truckloads of stretchers, blankets and other supplies arrived from the State Street department stores offered at no charge. The alley at the rear of the building was congested with scores of trucks and delivery wagons. Each truck was unloaded, then quickly re-loaded with blanket-wrapped bodies and sent to the Second Regiment Armory which had been secured by the Coroner’s office as its central morgue.

Shortly after the Coroner’s office established the temporary morgue at the Armory, the Red Cross established rest rooms and first aid stations within and saw to the installation of scores of telephones. The Chicago Red Cross nurses chairperson, Miss Minnie F. Aherns, quickly selected a competent staff and provided cots and restoratives for the Armory emergency stations. The emergency stations handled dozens of fainting and hysterical people who entered the temporary morgue. Between midnight and 7 a.m., care is provided for 30 hysterical and exhausted women.

About midday, nurses and physicians were secured to relieve those who were tiring. By afternoon the strain was beginning to show on the rescuers, many of whom had been without food since early morning. Feeding stations were then established on nearby tugs and docks.