Cameras on the Bridge

Curious as to what the forum’s viewpoints are regarding companies putting cameras in bridges. I recognize that it is mostly a way for the company to cover their butt should something happen, but does anyone see it as a company overstepping?

We have 4 cameras in the engine room, I have no problems with it, keep one aimed at a centrifuge and one on the OWS they we all PTZ cameras and we control them in the ECR

I think most people are familiar with engine room and deck cameras. They serve their purpose and can be quite useful operationally. Frequently of course they are used after the fact for incident review/investigation.

But I’ve never seen a camera in the engine control room, and it wouldn’t thrill me to see one, even if I have nothing to hide. So I’d understand not expecting/wanting one observing you surfing google on the bridge (or whatever it is Mates do up there). But I suspect it’s for the same after the fact/incident purposes.

The video that comes to mind someone posted a while ago was the supply boat backing down right into what looks like a wind turbine or fixed leg structure. The mate is seen on the Bridge Cam staring down at a desk or something as the structure rapidly grows in the window behind him…then they crash and everything goes flying, including the mate. You can say the camera isn’t necessary for operations, but I bet it made that investigation a lot easier.

Edit: come to think of it, wasn’t that Maersk engine room fire that was praised for quick crew reactions shown split screen with both engine view and console view? Maybe it is common.

Beginning around 2017 the USCG mandated a number of cameras in the engineroom of many fishing vessels. The cameras are monitored in the wheelhouse.

Reason: Most fishing vessels have never had licensed assistant engineers. But for some reason this became a sticking point with the USCG around 2017. There was no incident that set it off. The USCG decided for their own reasons that a licensed individual always had to have eyes on the engineroom.

This did not sit well with the fishing industry. So the USCG proposed a workaround: unlincensed assistant engineers could still be used if cameras (about four or five) were installed in the engineroom and monitored in the wheelhouse. That way the licensed deck officers would technically have eyes on the engineeroom if the (licensed) chief wasn’t on watch. (There were also a few alarm panel requirements and remote fuel shut-offs that many vessels already had).

And that’s the way it has been since then. Our deck officers say they actually like the cameras, especially for emergencies. During emergency steering drills and fire drills in the ER they can actually see what is going on, instead of pestering the engineers on the radio.

There is no requirement for recording capability

Problem with camera monitors in the bridge is that they are turned off, only time I see them on is when we are DPing next to a rig, years ago, we had cameras on the gun deck of the seismic boat that I worked on, monitors were off and a man went overboard and drowned, after the investigation, the monitors were never turned off again

I like a dark wheelhouse at night to preserve night vision and to be able to see other vessels lights. Too many monitors are a problem.

Some devices or monitors can be difficult to turn down the brightness. Especially when you’re new to a boat. Some boats have tinted film to cover monitors at night.

Some vessels do not have engine gages in the wheelhouse. It’s nice to have a camera on the engine gauges.

I wish that I also had a camera in the galley. It would be nice to know that nothing is burning, and to be able to see who is in the galley and that they are safe.

A great point was brought up about having a camera pointed at the centrifuge. I’m going to get that added.

With cameras and automation, I see a shrinking engine room department, we have already lost a QMED, I see in the near future that it will be a Chief and a QMED

I see cameras on the bridge as a good thing. Helps with any incident investigation. Yes its CYA for the company, but that’s the way of things. If I was a boat owner and it was crewed by other people, I’d want to know if it grounded, if it was because of a mechanical problem, or because the Captain was staring at his phone instead of the window/chart.

With today’s focus on increased gender diversity in our crews, it also helps protect employees from false harassment allegations, or support factual claims.

I have been on boats with none and some with 80, including several on the inside the bridge.
Most also have a VDR listening and recording.
From an insurance adjusters viewpoint I guess there should be cameras covering every inch of the vessel.
While we are at it, I’m pretty sure a good argument could be made to put several in the ECR, inside hallways and Lounges.

Yes, it will become common, and already is, a company called ShipIn is already trailblazing their AI technology. Insurance providers want and are asking ship operators to install. Maritime is and still so far behind with technology, best to embrace it all. 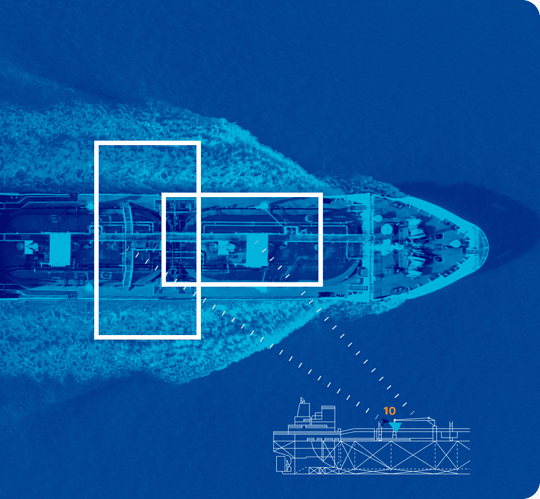 I just looked at this ShipIn site. I’m not sure if I agree with all that. I’m in favor of cameras for post incident review, accident investigation, etc. Looking at ShipIn, it seems that they’re pushing to use it to monitor work performance. Example, if a crew is supposed to do rounds, the AI can monitor if x number of rounds have been performed in a certain period, and then provide feedback to the company that compliance with performing rounds on time is only 50%. I’m not total against this, I’m on the fence. In theory it seems good, but it also seems like a slippery slope to working in an Amazon warehouse and having your every action monitored by AI to track your job performance.

But hey, maybe someday we’ll all just be run by machines and worked to death. The Matrix and SkyNet can be our future if we want it.

Crew does not own these multi - million dollar assets, nor pay the insurance premiums, if it was you, you would want to have some sort of oversight of your asset. I don’t understand why everyone is so scared of this? Do your job, do it properly, there should be no issue if a camera is watching you.

I realize my experience is limited as far as time at sea goes - about 10 years, but every ship/tug/ferry I’ve ever worked on has had cameras all around. That’s about 20 ships/boats including cadet time and summer jobs.

I agree - what’s so scary about it? We already have VDR for the bridge anyways

It will soon be an industry norm, most are just recorded over, not too many people will get the coveted job of watching countless hours of footage from a fleet of boats, maybe petrobras, but not others, maybe a random pick like a drug screen. We have them in the engine room and carry on like they aren’t there

They ARE industry norm.

The CYA goes both ways. I had a captain on a tug use it to save his ass from getting fired because the other crew tried to blame damage on him. We went back and pulled the tape. Damage on the opposite rotation.

Yes, now… most major companies employed the cameras a few years ago, smaller companies still have not, costs money to upgrade. We also have a Remote Monitoring Center that gets information from our AMS and they digest it, we get emails telling us we have a problem before we get the alarm, trend analysis, at first I didn’t like it, later found it to be a beneficial tool

Well, MSC ships already have always-on audio recording on the Bridge, slippery-slopewise, is this just the next step?