Bulk Carrier Hard Aground in Mauritius After Fight On Board

And there you have it. Ahoy!

Once aboard, the coast guard team entered the engine room, which had been barricaded, and arrested the chief engineer, who was the suspected leader of the fight aboard the ship. He was evacuated for medical treatment; local reports indicate that he had been shot. The remainder of the crew are safe.

Investigators are still looking into the exact cause of the fight and the grounding.

Five Oceans Salvage has been contracted to remove the vessel from the rocks. One towing vessel, the Five Oceans anchor handling tug supply ship Ionian Sea Fos, attended the 45,000 dwt Benita as of Friday evening. The Fos, stationed in Port Louis, Mauritius, has a 100 ton bollard pull, and is equipped with salvage pumps, fenders, welding machines, pollution control supplies, and a full set of diving equipment for two.

The Benita was empty at the time of the grounding, and has 145 tonnes fuel oil and 30 tons diesel aboard. No pollution has been observed.

Seafarers on Mauritius mutiny ship ‘traumatised’, man due in court

“The grounding followed an incident on board involving a crew member who suffered a serious medical episode which led to him attacking one colleague before causing extensive damage to the engine room systems that led to a loss of power to the vessel,” the statement said.

Jeeezus. Sounds like mental illness and/or drugs of some kind involved, if this allegation is true.

What a sea story to pass on to the grandkids.

" [I]I will not be accepting the blasting of the rock. It will destroy our marine environment. If this is an implosion, this will create shock waves[/I] , "says Environment Minister, Alain Wong, to [I]express[/I] . He was reacting to one of the proposals referred to free the MV Benita, which hold No. 5 was left embedded in a rock. One proposal is to use a hole punch and the other an implosion.
But this solution does not like the Minister of the Environment. He says the island Brocus protects the bay of Cap and dynamite this area will have consequences for the marine environment.
Furthermore, the explosives expert, American Gary DeMarsh arrived Tuesday, June 28 He will be responsible for providing proposals to free the ship. He should visit the site on Wednesday for inspections. Its report is expected in late afternoon.
As for the [I]Voyage Data Recorder[/I] , commonly known as black box, it will be sent by mail in Avenka in England shortly. [I]"We want to ensure that there are no other data on the hard drive and memory card "[/I] says a source. The cleanup - Worth a look forum members.

A dynamiting operation will soon be implemented to free shipwrecked MV Benita from the coral reefs at Le Bouchon. However, the inhabitants of the region are voicing out their concern against this decision, arguing that the lagoon would be subjected to yet another disaster.

Over a hundred of inhabitants have signed for the petition; they are worried as to the fate of the coral reefs.

Five Oceans Salvage reported Saturday that the vessel sank at 1730 local time at a chartered depth of 4,400 meters. The vessel turned over by the stern at approximately 1335 local time after having developed a severe stern trim, prompting the tug Ionian Sea FOS to use the tow line quick release in anticipation of Benita’s imminent sinking. 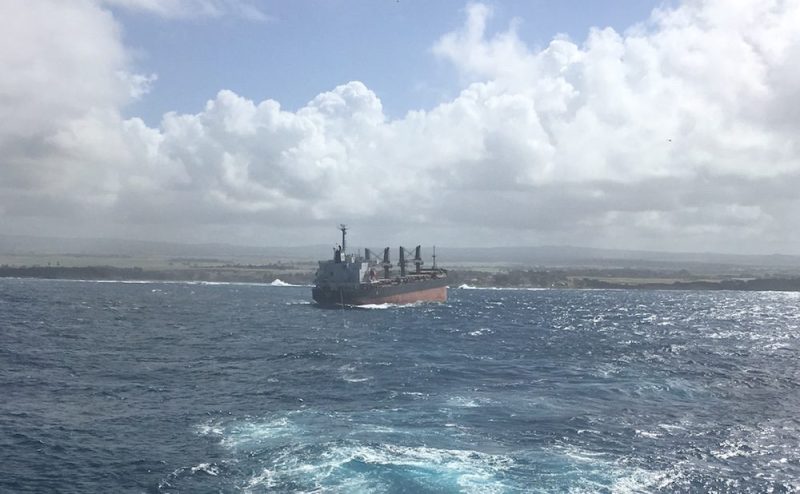