Any of you heard of a "Fowler Wheel" propeller?

interesting concept. I say probably an early version of a Voith Propeller. Has anyone seen another application besides USS Alarm??? 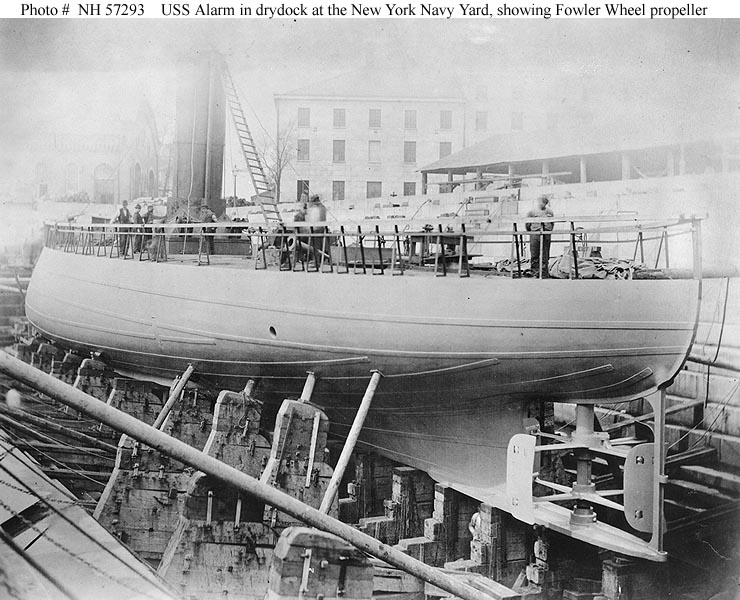 I am going to take a wild guess that the stoopid thing didn’t work since it appears to have never been used again?

interesting concept. I say probably an early version of a Voith Propeller. Has anyone seen another application besides USS Alarm???

Very interesting she prob. Didn’t steer worth a crap would be my guess from looking at it

This reminds me of rotor ships: http://en.wikipedia.org/wiki/Rotor_ship

They use spinning vertical cylinders to create a difference in air pressure which propels the ship forward. I knew there was a ship ([I]Buckau) [/I]in the early 1900s that used this means of propulsion, but when I looked it up again for this post, I was surprised to learn that a modern ship ([I]E-Ship 1[/I]) is using rotorsails to aid in propulsion.

much more info on the USS ALARM here

So does the pitch change and that controls the motion or am I missing something? I don’t quite understand how it functions.

And Voith’s gizmo as well…

Funny though, those sure look like rudder gudgions on the Alarm…

much more info on the USS ALARM here[/QUOTE]

So the US had the X bow first

and it came with an explosive device attached to a stick! How cool is that. That would come in handy .

[QUOTE=CaptDag;120754]and it came with an explosive device attached to a stick! How cool is that. That would come in handy .[/QUOTE]

Yes it would, but you’d probably have to fill out a CG-2692 every time you used it.

and it came with an explosive device attached to a stick! How cool is that. That would come in handy .

An ultimate “pointy stick”! Need to install one of those on the ORCA. Anyone got a spare 300# impact explosive charge they aren’t using?

I’m in the process of researching a ship builder from Buffalo, NY: David Bell (the David Bell of Buffalo, NY and NOT the David Bell of Pittsburgh, PA). I found an Australian newspaper on-line with an article about David Bell’s firm building two essentially identical Revenue Cutters, but one would have a Fowler Wheel and the other a propeller. The article is in the far right column, but Bell isn’t discussed until much further down. I believe the names of the two Bell Revenue Cutters discussed would likely be the Gallatin and Hamilton. If I uploaded the file correctly it should appear below, otherwise I’ll try again tomorrow.

Here are links to two of the patents that apparently apply to the Fowler Wheel. If you search for “Frank G. Fowler” you’ll find the inventor’s other patents. The best way to view the patents is to click on “Download PDF” and then click on “Open” or whatever pops up from your PC to view it. Otherwise you have to sign in as a Google member. https://www.google.com/patents/US153892?dq=“Frank+G.+Fowler”&hl=en&sa=X&ei=Wsd5UsLiMOzLsQSK9IGwBg&ved=0CEoQ6AEwBDgK https://www.google.com/patents/US177064?dq=“Frank+G.+Fowler”&hl=en&sa=X&ei=Ssd5Uqz4L8LdsATd8oGoBg&ved=0CFwQ6AEwBw

Here’s an update to the information I posted previously.

The U.S. Revenue Cutter [I]Alexander Hamilton[/I] was outfitted with “Fowler Propellers” per one source. This ship was a near twin to the [I]Albert Gallatin[/I]. Both were built simultaneously by the David Bell Works in Buffalo, NY. The [I]Hamilton[/I] had a standard screw or screws (no source specifies the number of screws). A later revenue cutter built by Bell, the [I]Boutwell[/I], was a bit smaller and it had 2 screws.

Below are specifications and history details on the [I]Alexander Hamilton[/I].

> Rebuild dates: 1872 & 1874 (perhaps to replace the Fowler Propellers with a more commonplace screw or screws?).

> Subsequent service: sold in 1906, with no information on reuse or history known.