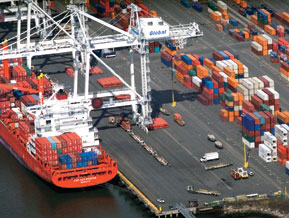 An examination of lobbying records filed by the American Maritime Officers union has revealed a pattern of Lobbying Disclosure Act violations by the union and a lack of oversight by the congressional offices tasked with ensuring the accuracy of the reports.

Under the act, lobbyists are required to report every quarter the issues in which they are engaged, but for nine years the union reported lobbying the same 16 outdated —and, in many cases, dead — pieces of legislation that it initially reported lobbying in 1999 and 2000.

On a form it filed Jan. 20, covering the fourth quarter of 2009, the union updated its contact names, expense amounts, lobbyist names and filing methods but still stated the union was lobbying the 111th Congress on the same legislation from a decade ago. For the past several years, the forms have been signed electronically by AMO’s national president, Thomas Bethel.

The Lobbying Disclosure Act mandates that the form include for each quarterly period “a list of the specific issues upon which a lobbyist employed by the registrant engaged in lobbying activities, including, to the maximum extent practicable, a list of bill numbers and references to specific executive branch actions.”

The government rarely pursues such cases, but a lobbyist who knowingly fails to comply can be punished with a civil fine of up to $200,000. If the failure is deemed “corrupt” in a court of law, it can also mean up to five years in prison.

The AMO, the nation’s largest union of merchant marine officers, represents about 4,000 members nationwide and is headquartered in Dania Beach, Fla. The group was part of the AFL-CIO’s Marine Engineers Beneficial Association until 1994, then functioned as an independent, unaffiliated union for almost a decade before signing an affiliation agreement with the AFL-CIO’s Seafarers International Union of North America.

In 2007, the union’s former president and its former secretary-treasurer were both convicted of racketeering conspiracy and mail fraud in a scandal involving illegal contributions to political candidates. Neither was a registered lobbyist for the organization.

The AMO is one of the few unions that have given substantively to both parties. (Most labor political action committees give almost exclusively to Democrats.) In the most recent election cycle (2007-2008), the union’s PAC gave a total of about $680,000 to political candidates — about 55 percent to Democrats and about 45 percent to Republicans. The union has also been one of the top lifetime contributors to House Minority Leader John Boehner of Ohio, with at least $150,500 in contributions over his 20-year congressional career, the center found in research for its upcoming “Who Bankrolls Congress?” series.