“what’s the book say? Hmmm, I’m the stand on vessel. Well by God, I’m standing on even if it kills me.”

Indeed…he was the stand on vessel
and if the ferry could not turn to starboard, it could certainly have slowed to allow the other vessel to cross safely ahead. Has the WSF released any statement to blame the other vessel yet?

It’s more likely the [U]wreck[/U]creational boat “captain” was asleep. He did name his boat Nap Tyme.

[SIZE=2]Most of the ferries have large turning radii, and it takes a minute or so to get the bow end props up. The bow rudders are locked until they get down below around 5kts typically so they don’t break anything. Small boat did have right of way according to the rules of the road, however, they are at fault for not maintaining a proper navigational watch. Not sure what was going on in the wheelhouse of the Chetzemoka. Lots of panic at the last minute I’d imagine.[/SIZE]

gCaptain made a video about the incident. There has been some controversy on this.

COLREGS Rule 5 which, ignoring the ground rules, is really RULE1 – [B][U]Every vessel shall at all times maintain a proper look-out[/U][/B]…

The video gLive E16 is at the bottom.

The below link shows a few photos of the damage to Nap Tyme that occured when he was below deck in the head.

That is a bit disingenuous … the video clearly shows a ferry T-boning a recreational vessel, which by the way, even an engineer can clearly see is the stand on vessel.

What is controversial about the incident? The recreational vessel was the stand on vessel, its operator not maintaining a look out or taking action to avoid a collision is just as much a violation of the COLREGS as that of the ferry’s master. Both parties are at fault, maybe even more on the ferry since not only was it the give way vessel but the master actually made a conscious choice not to take any action to prevent a collision until it was obviously too late for physics to overcome arrogance.

Compared to that, going below to take a leak is pretty mild.

What would those who believe there is some controversy say if the stand on vessel was another ferry or a tug and barge, a boxboat or one of those CG 47 footers?

Ferry showed he can stop pretty dang quick with full reverse after the collision. He was just doing the normal ferry routine which is to ply his normal run and blow his horn and assume all recreational traffic will get out of his way. 99 times out of 100 it works for them. Didn’t work here.

I remember a similar occurrence which took place in mid-Atlantic. To begin with it is stunning that in such a vast area it was possible to have a collision. If we had not made way for the other ship, a Norwegian tanker, we surely would have had a collision. We blew the horn a number of times but the other tanker persisted in its course. When we made our turn to avoid a collision we suddenly saw a figure racing from the lowest deck up the stairs towards the bridge. Afterwards we tried to raise the ship on the radio but in style they didnot react in any way. We missed each other with a couple of hundreds meters to spare… Check the browsing history of the Mate and the Quartermaster prior to the collision.

[QUOTE=Slick Cam;193102]Ferry showed he can stop pretty dang quick with full reverse after the collision. He was just doing the normal ferry routine which is to ply his normal run and blow his horn and assume all recreational traffic will get out of his way. 99 times out of 100 it works for them. Didn’t work here.[/QUOTE]

Yep. Most ferry captains operate this way, adhering to the “tonnage rule”. I’m sure they can justify it by saying that if they stopped for every Tom Dick and Harry crossing in front of them in their little boats, their schedule would fall apart and their passengers would raise hell. Unfortunately for them, there are no exemptions for ferries in the right of way rules.
In this instance however, the wreckcreational boater shares some responsibility for failure to keep a proper lookout. There’s no excuse for not stopping the boat if he was going to use the crapper for that long in an area where there is traffic.

There is a “security zone” established around all Washington State Ferries.

Regardless of who is at fault a collision is something to avoid.

[QUOTE=DeepSeaDiver;193111]There is a “security zone” established around all Washington State Ferries.

Thank you professor of Federal Regulations

now is there any chance you might not add anymore of such dribble here?

Regardless of who is at fault a collision is something to avoid.

How did you end up being such an immense genius anyway?

Sheesh! Where do these kids get their educations nowadays?

I am learning from you guys. I have a few mentors these days and c.captain you are one of them. I am into this stuff. I do understand Nap Tyme actually had the stand on position. I also understand the “security zone” as listed above is a different issue. It’s my opinion Nap Tyme made no attempts to avoid the collision that’s why after the collision his autopilot tried to bring him right back on course. In addition, he should become familiar with Rule #34. By the way, he did not sound his horn as he was standing watch, and was not sure of the action’s of the larger tonnage vessel in his path, that’s because he again did not follow Rule #5 and is in violation of the COLREGS to failure to stand watch. The little boat captain admitted he was not even at the helm. He should consider a pee cup. Get his little boat fixed and be thankful it was not worse, and moving forward be more careful so this stuff does not happen again which can put all boaters safety at risk.

[QUOTE=DeepSeaDiver;193115]I am learning from you guys. I have a few mentors these days and c.captain you are one of them. I am into this stuff. [/QUOTE]

dear God above…you are such a little boy!

Thx. Just a little boy or not, right on the $ on with a few subjects. I am not perfect and do not it all, although with every day that passes I learn something new. Thanks for helping me everybody / gCaptain forum members / mentors. It’s pizza night over here. Have a great weekend everybody. And by the way knowing c.captain and myself we would fix our little boat ourselves if it would have happened to us, rather than paying somebody else.

Under Rule 17, when it becomes clear that the actions of the give way vessel by her own maneuvers can’t avoid the collision the stand on vessel must take actions to best aid in avoiding the collision. Nap Tyme did not do this.

To support gCaptain directly please consider bookmarking the following link and shopping via Amazon. This book is available on Amazon. let’s just end this nonsense by agreeing that both vessel violated the COLREGS. one piloted by an amateur and the other by professionals. I believe the professionals need to be held to a higher standard of competence and hence they are not in any way absolved because the amateur made his mistake in taking a shit leaving his vessel underway and making way without a lookout or person controlling his vessel’s movement. certainly the WSF people experience this type of situation often and should know that if you can’t raise the other vessel by VHF or otherwise determine the other vessel operator’s intentions, they need to pull the throttles back to zero and let the other boat pass ahead…their schedule be DAMNED! ON TOP OF THAT THEY WERE BEYOND DOUBT THE BURDENED VESSEL MANDATED TO TAKE ACTION TO MAKE SURE THAT OTHER VESSEL PASSED AT A SAFE DISTANCE REGARDLESS OF RECEIVING ANY REPLY FROM THAT VESSEL’S OPERATOR. THE FERRY PILOT WAS DEFACTO IN THE WRONG BY THERE NOT BEING A SAFE PASSING OF VESSELS WHETHER THERE WAS A PERSON AT THE HELM OR NOT!

of course that is assuming that the WSF people are in fact true professionals…perhaps they are really amateurs themselves only wearing uniforms?

[QUOTE=c.captain;193126] I believe the professionals need to be held to a higher standard of competence and hence they are not in any way absolved because the amateur made his mistake …[/QUOTE]

And that is the bottom line. I believe the WSF master acted with incredible arrogance in failing to take early action to prevent the collision. By all appearances, he did not take any action to avoid the collision until it was far too late. He made the choice to violate COLREGS and acted as if he had special rights and privileges by virtue of being a WSF Master under God.

The yachtie might have been the stupidest person on Puget Sound that day but the ferry captain proved he was even less fit for command. His actions were those of arrogance and conceit that lead to the most egregious violation of regulations and good judgment. A professional would not have rammed that yacht. This was not an accident, it was a failure of the ferry captain to perform his duty to protect his passengers, crew, and vessel.

WSF’s history of cowboy captains and general incompetence shows it operates with a culture of disregard for rules, and that is ultimately the reason this happened.

The State should be very happy that the yacht was not carrying a load of passengers and sunk when it was rammed. 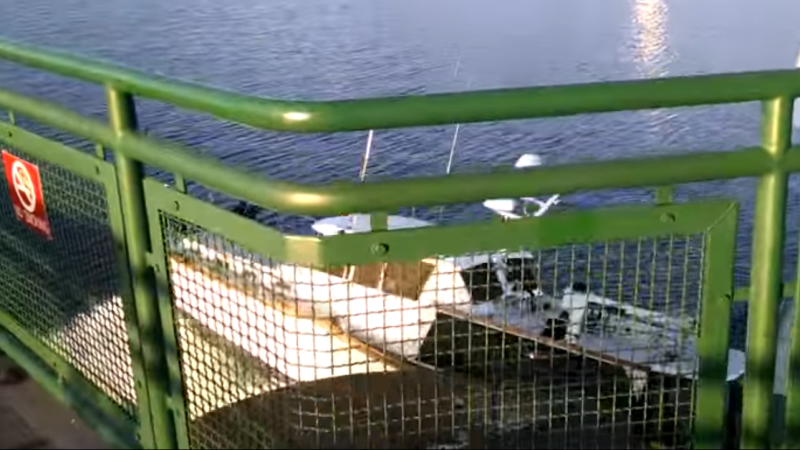 Which Vessel Was Most At Fault in This Collision?

FUCK CIRCUMSTANCES…NO MERCY FOR THE AROGANT OR INCOMPETENT!