What should fog signal be on a connected DP MODU?

When a DP MODU is connected, what should her fog signals be?

It would be Uniform I think. Two short and one long,

A MODU operating on DP and attached to the seabed is considered underway, not making way, and restricted in the ability to maneuver. 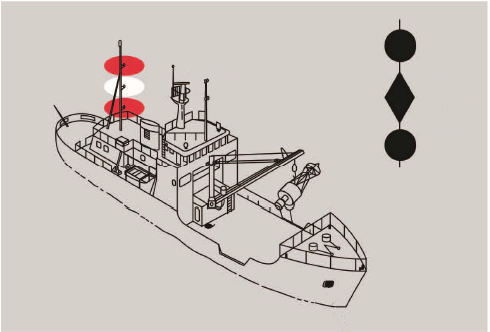 See the follow-on question below, where additional lights and shapes may be required.

Are there additional navigation light requirements that apply to a MODU operating on dynamic positioning (DP), while obstructions exist in addition to the drilling equipment (e.g. ROV ops, subsea ops with the heave-compensated crane, etc.)?

Yes. Due to additional operations where obstructions exist to one side, the MODU may indicate the sides on which other vessels may and may not pass. 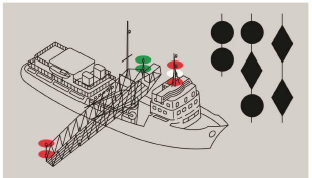 I remember an H2S drill and everyone mustered on the helideck, then the Captain dismissed from drill with the horn. Surprised we didn’t lose any crew off the helideck. It made for a good rerun on the CCTV.

There’s no tie, @anchorman is right.

Depends where you are. Canada has a Rule 42 that says…

That’s what I thought. Any knowledge of other coastal states which override rule 35?

Just a copy paste from USCG and COLREGS

I guess some background to the reason your asking the question would be helpful.

In the UK it is Uniform I think.

I didn’t realize it was different in other countries.

I find it very odd that these signals (UK, Canada) are not aligned with the International ColRegs. Having gotten original U.S. licenses in the 70’s for International, Inland and Great Lakes there were some differences and there was also a Western Rivers Rules. One big one was the Great Lakes fog signal for power driven vessels underway that was 3 short blasts every minute. All of those sound signals were pretty much consolidated/aligned in the 80’s with the International Rules. I believe Canada still does some drilling in Lake Erie and I am now curious as to what the drill barges would sound or if they’d sound anything as they might be jack up rigs.

Depends where you are. Canada has a Rule 42 that says

Am i reading the application section of Canadian Colregs correctly in that it would apply to canadian vessels anywhere in world outside of another countries colregs line? So like a canadian drill ship in the gulf of mexico would sound these signals? Or just exploring on a canadian license to drill?

Well, if it’s in the GOM then I would assume it would be two spits in a dip bottle and then a hardy “Yee Haw” out the window.

So like a canadian drill ship in the gulf of mexico would sound these signals?

I would think no, they’re operating under their USCG Certificate of Compliance. That said, it’s been years for me, but the USCG always wanted the lights and signals in 33 CFR 67.10 once latched up right or wrong. They always checked to see if we switched from international Morse-U to the U.S. 2s every 20s. Has that changed?

That could apply somewhere like in Lake Winnipeg or the Great Slave Lake which isn’t directly connected to either the oceans or the Great Lakes. I think somewhere they would have to say where that does and doesn’t apply and I can’t believe it would apply anywhere the International Colregs would apply.

In SE Asia you get different answers from different countries.
Drilled in a few and we always checked.