Well all I can say at this is at least Ray "the Hood" if finally GONE!

even though I suspect his replacement will do a not a single goddamned thing to help our industry and will continue to laud that cesspool on Federal Government waste in Great Neck, Knoo Yaak 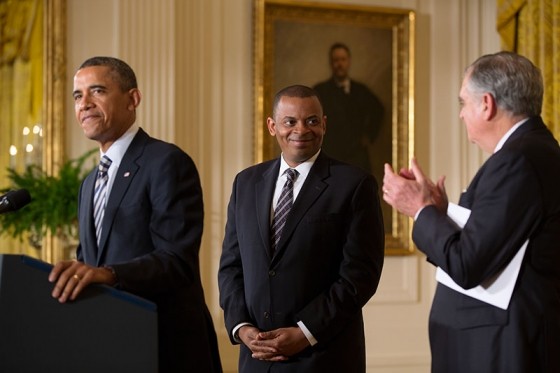 The 42-year-old Foxx joins President Barack Obama’s Cabinet after four years as mayor of the 17th-largest U.S. city and four years on the Charlotte city council.

Under his leadership, Charlotte was selected host city for the 2012 Democratic party convention, which propelled Obama to a second term in the White House and brought Foxx national fame.

He now will oversee a department with about 53,000 full-time employees and over $72 billion in budget authority. In addition, over 12 million Americans are employed in transportation-related jobs that could be affected by decisions Foxx makes.

Foxx is the third member of Obama’s second-term Cabinet approved in the past two weeks with broad bipartisan support, unlike the battle over approval of former Republican Senator Chuck Hagel to be defense secretary.

The Senate voted 97 to 1 on Tuesday to approve Chicago billionaire businesswoman Penny Pritzker to be commerce secretary and voted 93 to 4 last week to give Obama’s international economic affairs adviser Mike Froman the job of U.S. trade representative. Hagel, in contrast, was approved 58-41 after an acrimonious confirmation battle.

Two other Obama cabinet nominees – Tom Perez to head the Department of Labor and Gina McCarthy to head the Environmental Protection Agency – face a rough ride in the Senate.

Perez, who is currently assistant attorney general for the Justice Department’s Civil Rights Division, was barely approved in committee by a 12-10 vote, with Republicans all voting no.

McCarthy, who heads EPA’s air and radiation office, was approved in committee by a 10-8 party line vote, and Republican opposition has been intensified by Obama’s announcement this week of plans to regulate greenhouse gas emissions from existing power plants.

Foxx will succeed current Transportation Secretary Ray LaHood, a Republican and former member of Congress who has spent much of his adult life in Washington.

He has promised to continue LaHood’s focus on safety, including a program to reduce distracted driving, while working with Congress and the transportation community to find new ways of funding highway projects and other infrastructure needs.

A recent study from the American Society of Civil Engineers estimated the United States needs to spend $2.75 trillion by 2020 to maintain and improve highways and other important infrastructure. That’s roughly 66 percent more than the $1.66 trillion in expected funding over that period.

For decades, Congress has relied on the federal gasoline tax to fund highway projects, but that is seen as an increasingly ineffective way of raising revenue because rising fuel efficiency means less gas is sold. The gas tax is currently 18.4 cents per gallon and has not been raised since 1993.

Congress will confront the issue again next year when the current two-year highway bill expires.

They replace an A-hole with someone that has zero transportation experience in his resume? Jeez when will the political favors stop and these people finally do something that is right for our country?

[QUOTE=ChiefRob;113528]They replace an A-hole with someone that has zero transportation experience in his resume? Jeez when will the political favors stop and these people finally do something that is right for our country?[/QUOTE]

As unqualified as Foxx is for the job at least he can’t be worse than “the Hood”! My only wish now is for MarAd to stop granting so many Jones Act waivers. I expect little else though nor feel I have any good reason to. AID funding is now soon to be lost and with it at least a dozen US flagged vessels but the bright side is that the product Jones Act tanker market suddenly got a whole lot better this week so hopefully we’ll see several newbuild tankers being announced soon by the big players.