Yet anotherdeveloping tropical cyclone (Typhoon Haiyan) over the western North Pacific isforecast to develop into a major Typhoon as it approaches the Philippinesduring the next couple of days. Currently packing winds up to 65 knots, Haiyanis forecast to reach 120-130 knots during the next 48-72 hours. Haiyanwill move across the Central Philippines between 00Z and about 21Z on the 8thof November.

Super Typhoon Haiyan was packing winds to 135 knots this morning as it continues to move westward towards the Philippines. Haiyan could reach max winds of 140-150 knots later today and likely will maintain super typhoon strength until crossing the Philippines between 00Z and 21Z on the 8th.

Super Typhoon Haiyan continues to develop and now has reached an unbelievable max wind of 165 knots as it bears down on the central Philippines!

165 knots = 190 mph. I personally saw gusts to 80 mph during Sandy last year. I can not image the destruction this storm will bring - especially on an island country.

Copy/paste from Wiki on CAT 5 Damage:

According to Robert Simpson, there are no reasons for a Category 6 on the Saffir-Simpson Scale because it is designed to measure the potential damage of a hurricane to manmade structures. Stating that “…when you get up into winds in excess of 155 mph (249 km/h) you have enough damage if that extreme wind sustains itself for as much as six seconds on a building it’s going to cause rupturing damages that are serious no matter how well it’s engineered”.

Update 18Z Super Typhoon Haiyan (aka Yolanda) is closing in on the Philippines with sustained winds up to 170 knots. The radius of hurricane force winds, however. extends outward only 30-35NM to the south and 45-50NM to the north while 50kt winds extend outward 55-60NM south and 65-70NM north. The eye of Haiyan will move over the northern portion of the Leyte Gulf during the next few hours and across Leyte Island in about 4-8 hours…

Nov. 8 (Bloomberg) — Super Typhoon Haiyan, the equivalent of a Category 5 hurricane, slammed into the Philippines today after forcing thousands of people to evacuate. 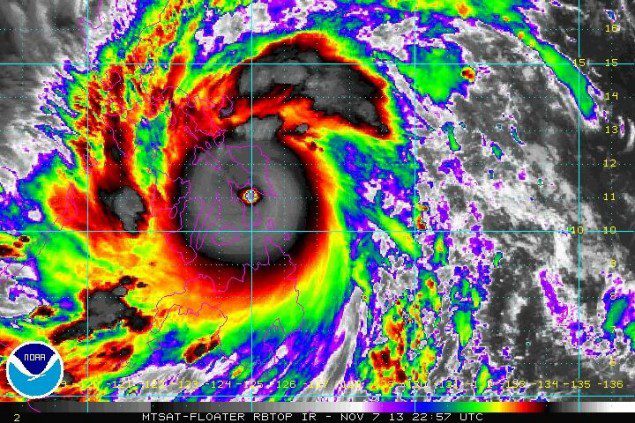 Haiyan had top winds of almost 196 miles (315 kilometers) per hour when it was about 489 miles southeast of Manila, the U.S. Navy’s Joint Typhoon Warning Center said at 2 p.m. East Coast time. Winds gusted to as high as 235 mph, the Navy said. About 125,600 people in 22 provinces have been evacuated, the nation’s disaster monitoring agency said in a 6 a.m. bulletin.

“If it maintains its strength, there has never been a storm this strong making landfall anywhere in the world,” said Jeff Masters, founder of Weather Underground in Ann Arbor, Michigan. “This is off the charts.”

The storm went ashore at about 5 a.m. in Guiuan, eastern Samar, said the Philippines Atmospheric, Geophysical and Astronomical Services Administration. Twenty-one areas mostly on the island of Visayas, which suffered a 7.2-magnitude earthquake last month, are on highest storm alert. President Benigno Aquino, in a televised address last night, warned of serious danger and said Haiyan may cause more damage than storm Bopha, which killed more than 1,000 people in Mindanao in December.

The Philippines, battered by about 20 cyclones a year, was the nation most affected by natural disasters in 2012, with more than 2,000 people killed, according to the Brussels-based Centre for Research on the Epidemiology of Disasters.

Monsoon rains swamped more than half of the Manila region in August, causing at least 27 deaths and shutting offices and financial markets for two days.

Masters said Tacloban, the capital of the Philippine province of Leyte, would take a direct hit and winds of at least 130 mph may sweep as far as 100 miles inland.

“There isn’t much built on the Philippines that can withstand winds like that,” Masters said.

Heavy rains from storms usually cause the highest death tolls on the Philippines, Masters said. Flooding may not be the worst threat this time because Haiyan is moving fairly fast. The high winds and storm surge have the potential to cause catastrophic damage, he said.

The true power of Haiyan isn’t known because reconnaissance planes haven’t flown into it, Masters said. The strongest tropical cyclone on record was Super Typhoon Nancy in 1961 with top winds of 215 mph. He said many believe the estimated wind speeds of storms between the 1940s to 1960s was too high.

Since 1969, only three storms have been as powerful as Haiyan, Masters wrote on his blog. They were Super Typhoon Tip in 1979 in the Pacific and Atlantic hurricanes Camille in 1969 and Allen in 1980.

The strongest storm to hit land was Camille, which went ashore in Mississippi with winds near 195 mph, Master said. While there are some estimates that Camille’s winds were closer to 200 mph, the exact speed is unknown because the instruments were destroyed, according to the U.S. National Hurricane Center.

After crossing the Philippines, Haiyan is expected to strike Vietnam in several days, according to the Japanese Meteorological Agency.

“It is going to be a huge problem for Vietnam and Laos,” Masters said. As much as a foot of rain may fall there, he said.

Update: Typhoon Haiyan is currently moving northwestward over the South China Sea about 400 NM southeast of Da Nang, Vietnam at about 06Z today but has been gradually weakening since it moved across the Central Philippines. Max winds are now at about 105 knots and forecasts suggest this weakening trend to continue with the max winds falling to tropical storm intensity in about 24 to 36 hours as it nears the northern coast of Vietnam.