Tsunami alert after earthquake of 8.2 near Alaska 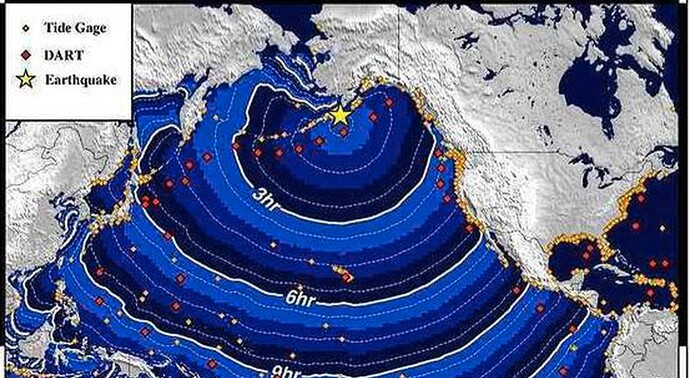 Authorities sound the alarm after an earthquake off the coast of Alaska. The American institute USGS currently measures the strength at 8.2. That could change. Tsunami warnings have been issued. The quake’s epicenter was about 60 miles southeast of the village of Perryville.

The United States, among others, has issued a warning for Alaska and a n Pretty soon the U.S. National Tsunami Warning Center calculated when a possible tsunami would reach certain parts of the world, such as the American west coast and a number of islands, while the alarm has also been raised in Hawaii.

Pretty soon the U.S. National Tsunami Warning Center calculated when a possible tsunami would reach certain parts of the world, such as the American west coast.

The most recent information from the U.S. National Tsunami Warning Center seems to indicate that the maximum wave height in centimeters for large parts of the world remains below 10 centimeters. Only off the coast of Alaska is the situation ‘red colored’. “Very encouraging,” said noted American meteorologist Matthew Cappucci.

The tsunami warning has been canceled.

…THE TSUNAMI ADVISORY IS CANCELLED…

You can definitely blame this one on global warming, from the inside.

For those of us who have never experienced a tsunami at sea:
Not so many years ago one of our captains reported encountering a tsunami while underway near the Aleutian Islands. It was day. He said there was no visible wave. Nothing you could see coming. The sensation was simply that the sea had suddenly dropped a fathom under the ship, rather like a car going fast over the top of a rise, and the riders feeling momentarily weightless. The ship bobbed and yawed. Then it was over.
Very disconcerting.

Tsunamis specifically, are generally caused by undersea earthquakes. They move through the water at great depth, rather than on top of it. That means a ship sailing on the open sea may barely notice a tsunami roll far beneath it. Rogue waves are much more dangerous.

Wind-generated waves usually have period (time between two successive waves) of five to twenty seconds and a wavelength of 100 to 200 meters. A tsunami can have a period in the range of ten minutes to two hours and wavelengths greater than 500 km.

Tsunamis, when they are out in the deep ocean, are not massive waves and walls of water. They are a large impulse wave of large wavelength and periodicity racing through the water at the speeds of a jet airliner. They would pass right by every ship and no one would see or notice a thing. It’s just an impulse passing through the water. Only scientific instruments could measure it.

As the tsunami approaches shallower water the front of the wave slows down tremendously while the back of the wave is still travelling faster. The wave builds up upon itself into the massive wall of water that then rushes ashore and does so much damage.

Then you got your seaquakes:

Seaquakes- Actual Shaking, usually felt on vessels due to the arrival of elastic (acoustic) waves through water Professional Mariner Forum

Anyone experienced an earthquake at sea?

Not at sea but moored in LA.

Then you have a problem. NOAA advises that since tsunami wave activity is imperceptible in the open ocean, vessels should not return to port if they are at sea and a tsunami warning has been issued for the area.

A tsunami may be less than a foot (30 centimeters) in height on the surface of the open ocean, which is why they are not noticed by mariners.

Some poor guy ran aground in the scramble to get out of Kodiak, didn’t sound particularly happy on 16.

Just because you can cut the channel doesn’t mean you should.

They would pass right by every ship and no one would see or notice a thing. It’s just an impulse passing through the water. Only scientific instruments could measure it.

And yet our crew certainly felt it. Mind you, our captain is an excellent observer, with 30 years of experience in the area. He’s been underway when other quakes/ tsunamis have visited the region. He never felt the like before. I’m sure if scientists had been aboard our ship when the event happened, they would have altered their theories a bit.

The wiki article on yesterdays’ earthquake includes the description of the July 21, 2020 earthquake in which our vessel felt the sensation of the water dropping underneath it. That quake measured 7.8. 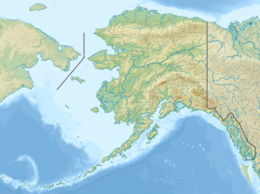 An earthquake occurred off the coast of the Alaska Peninsula on July 28, 2021, at 10:15 p.m. local time. The large thrust earthquake had a moment magnitude (Mw) of 8.2 according to the United States Geological Survey (USGS). A tsunami warning issued by the National Oceanic and Atmospheric Administration (NOAA) but later cancelled. It is the largest earthquake in the United States since the 1965 Rat Islands earthquake. The mainshock was followed by a number of aftershocks, including two that we...

A tsunami warning was issued for the North of New Zealand but quickly cancelled.

And yet our crew certainly felt it. Mind you, our captain is an excellent observer

Who am I to doubt the phenomenon as described by you? I take it that the ship was in real open, deep water. Well scientists did also deny for a long time the existence of rogue waves, it was all seamen’s fantasy or the result of too many alcoholic beverages.

It will be interesting to note any bottom uplift or subsidence at the Semidis.

I brought this phenomenon up with a geologist I know and he suggested that the felt waves are the result of a nearby underwater rockslide, which would explain the timing coinciding with the tsunami/tsunami warning.

Was on a large yacht in Ballard when Nisqually earthquake hit. It felt and sounded like we were rammed by another vessel and it came up from the bottom, not hitting the dock.

My earthquake experience in LA was on a yacht in a slip in Marina del Rey. The earthquake sent the boats rocking. Evidently waves bouncing off affected bulkheads. I remember being on the phone with someone north of San Fernando Valley saying they were feeling an earthquake. I was still on the line with him about 30 seconds later when the boats all started rocking…

No detectable bottom uplifting or subsidence at the Semidi Islands.

Then you got your seaquakes:

Have had that pleasure!

The “wall of water” type tsunami may well occur sometimes and places. But we’ve had some experience with tsunamis here on the N. Oregon Coast (thankfully, “distant” origin ones, not the Cascade Subduction wipe-out one that’s direly predicted!) and they’ve been pretty well observed. No one has reported any “wall of water” of any height, or even much of an observable wave. They’ve been more like “surges”…storm surges maybe. And mostly caused mischief, as with storm surges I’ve read about, in constricted places on the coast (inlets, estuaries, etc.). The Alaska one back in the '60’s surged up Elk Creek in the town of Cannon Beach and took out a bridge on US 101(Alt.). into the town, as well as damaging other structures. Meanwhile, the Necanicum River estuary about 10 mi. to the N. had a surge, but not much of a one reportedly, and sustained no significant damage. I’ve read that the literal translation of the Japanese word “tsunami” is “harbor wave”, and I think that’s pretty close to “harbor surge” which is what we’ve mostly seen so far around here. But I’m sure we’ve been lucky!