Government regulation in response to loss of life due to Boiler explosions on river steamboats was a profound change in views regarding the role of government in the affairs of private business. 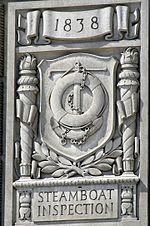 The Buffalo Association of Engineers which later led to the MEBA was founded in 1854 to promote the use of qualified engineers on steamboats: MEBA History.

The earliest efforts of the new association revolved around proper enforcement of the Steamboat Act of 1871. The M.E.B.A. also worked towards proper examination and licensing of engineers, and the abolition of controversial license fees. It fought against the use of foreign engineers on internal waters and summary revocations of licenses for union activities and protests over safety.

Here is an article that gives an overview: Roiling on the river

A century and a half ago, boiler explosions aboard steamboats were the disaster feared by the traveling public. The death toll from one explosion, that of the Sultana, on the Mississippi River probably exceeded that of the Titanic. Authors Charles Dickens and Mark Twain wrote about these explosions at some length. The public outcry over such explosions forced Congress to enact the first national transportation safety acts.

Here is a paper about the debate of the role of the federal government : Bursting Boilers and the Federal Power

The innovation responsible for the changed attitude toward government regulation was the steam engine.

The Lucy Walker steamboat disaster was an 1844 steamboat accident caused by the explosion of the boilers of the steamboat Lucy Walker near New Albany, Indiana, on the Ohio River. The explosion occurred on the afternoon of Wednesday, October 23, 1844, when the steamer's three boilers exploded, set the vessel on fire, and sank it. It was one of a number of similar accidents of early-19th-century riverine transportation that led to important federal legislation and safety regulations. The vessel's ...

I once read about a century’s worth of The Locomotive, the house magazine of The Hartford Steam Boiler Inspection and Insurance Company. This was an astonishingly substantial work filled with research and technical advice as well as statistics of inspections and accounts of boiler explosions – and showing considerable institutional memory as it often referred to articles published in editions a number of years previously.

It was completely fascinating, but I had a mild phobia about boilers for a few months afterwards. The Hartford took them off line after they were bought by AEG (maybe coincidence) but some few are available elsewhere on line – here’s one covering 1908 and 1909: https://archive.org/details/locomotive27hart/page/103

Steamboat boilers explosions is at the center of the history of maritime regulations in the U.S. Prior to the regulation of steamboats it was widely believed in the U.S. that the government had no right to regulate business.

It is clear enough that some kind of enforceable regulation is needed, or tragedies will keep happening. I watched a History Channel documentary a while ago, I think it was called “Why Ships Sink” or somesuch. While it didn’t really answer the titular question, and great portions were trite to someone with a bit of insight, there was one section in particular where they interviewed a maritime historian about early 19th century shipping.

He managed to convincingly convey just how risky maritime transportation used to be when commercial forces were allowed to rule, taking the North Sea winter of 1854 (?) as an example. The losses during those few winter months were truly staggering, with hundreds of ships lost, taking countless lives with them. I’ve searched in vain for either the documentary or a good source for the numbers.

Another, perhaps even more striking example is the trade with the viking settlements on Greenland. There were several years where loss rates reached 20%, and still they kept on sailing. Clearly, the benefits (inestimable riches and untold reproductive success) were such that rolling a five sided die for success or death was worth it to the owner/operators, especially when the situation was viewed with a touch of cognitive bias.

What I don’t understand is why commercial forces don’t self regulate in this matter. According to my (admittedly simplistic) view of the world, the insurers’ interests should prevent coffin ships from ever existing, without the need for Mr. Plimsoll to intervene. Still, we see time and again that shipping in unregulated markets lead to all kinds of horror, both in the East and in the West (where life is relatively expensive).

However, I’d also expect the relative cost of operating the vessel vs. cargo capital and risk costs to dictate that strong safety culture is good business. If the vessel and crew are relatively inexpensive, then increasing vessel and crew expenditure by a large factor should incur a relatively minor cost, at a large risk benefit. Am I just plain wrong, are the insurance companies blind(not bloody likely), or what the hell is going on?!

This may offer a little side light: https://riskandinsurance.com/brief-history-marine-insurance/

What I don’t understand is why commercial forces don’t self regulate in this matter.

I often wondered about this myself. I think there are two equilibrium points, one point is the commercial profit optimum and the second is the point that is acceptable to society.

Here in Maine, back in the day a 1/16 share in a single voyage could be purchased. (I have the receipts here at the house). Consider the expression’ waiting for your ship to come in". Meaning you will be set up if the ship comes back.

Ship’s crews came from a lower social class than investors. The legal system was both inefficient and rigged.

The families that depended on investments for income can spread the risk. The families of the ship’s crew cannot.

Interesting article. . . seems to mix Lloyd’s List with Lloyd’s Underwriting, and while both can trace their origins back to the same coffee house, and also leaves out Lloyd’s Register, also traced back to the same place. The Register, the first Class Society came about to do just what is inferred above, to protect UWs interests in providing consistent rules and establishing compliance to same, which is also a warranty condition in most (okay, all) marine insurance policies. But, like anything else, the quality and effectiveness of Class is dependent upon people and their foibles. . .