Hello,recently I was speaking to a relative of a mariner who was aboard the SS Arthur M Anderson on the voyage made with The SS Edmund Fitzgerald on November 9th& 10th 1975. This prompted me to start researching about both ships,and another the mariner served aboard. I read the Coast Guard report,and another more recent article at NAVweaps. website. I looked at the excellent graphic display at Great Lakes Graphics. It seems highly unlikely that a Great Lakes Captain as experienced as Captain McSorley and the crew of the Fitz., would not insure that the hatch covers were properly and completely secured. I dont want to argue with anyone about this subject,but I see the value of discussing it rationally without emotions. I put it to you, experience mariners that served in the Merchant Marine. Isnt it unlikely for the hatch covers not to be “Battened down” correctly. I understand both the Captains of these vessels knew bad weather was ahead,before they left Superior,Wisconsin-thats why they decided to make the passage to Whitefish Bay together. Thank you for your patience,and sharing your experiences.

There are a number of books about the sinking of the Fitz that look at a number of other theories. Too close to Caribou Shoals, etc. 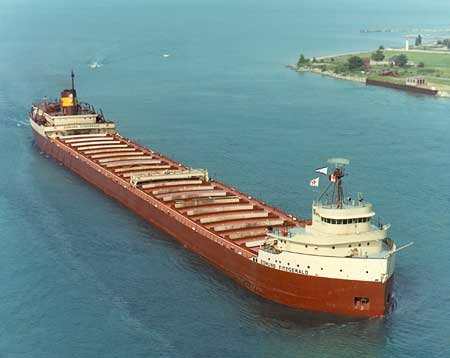 Entire generations now have no active memories of November 10, 1975, but the sinking of the SS Edmund Fitzgerald continues to fascinate, mystify and preoccupy young and old.

You can likely find a number of good books on the subject at Amazon.

Many years ago I wrote a Marine Casaulty thesis paper on the Fitz. (I know, I know, rehashing old stuff). My personal opinion is that it was no one factor but a combination of many. The previous hull breaches she had incurred may not have been fully identified or repaired previously. Combine that with the loss of nav beacons in the area, and her suspected track across shoal water which likely led to at least a momentary grounding in the trough of rough seas and the stage is set. The lack of comms, debris, etc. lead me to conclude that something catastrophic and near instantaneous happened to her on the surface. Either she took a rogue wave over the bow while already compromised; or the rough weather broke her back nearly in half due to previous damage, grounding, etc. Likely no one will ever know.

The combination of factors is almost unsurmountable. A ship with possible structural issues. Mixed reports of overloading. A Capt. racing bad weather. A storm far worse than predicted. At night. Both radars out. Shore based ATONs out. I think Gitche Gumee wanted her sacrifice and took it that night.

The Fitzgerald had her hatches dogged as well as possible, I’m sure. Over the years though, she had her load line changed a few times so she could carry more cargo. This, its widely held, led to metal fatigue and she broke her back in those steep seas. Arthur M. Anderson is still sailing, btw.

[QUOTE=lm1883;150705]The Caribou Shoals theory seems to be the most accepted and is the one I subscribe to. But who knows, probably was more than one factor. Hatches leaked a little, fatigued hull touched bottom, etc… The first photos show the chadburn is on stop, the sound powered phone cord (think of how heavy that receiver would be) leading up into the overhead, chilling thought.[/QUOTE]

Thank you for these comments! Do you have a link,or links to these photos?

I recently saw an article online concerning the “Dive Detectives” program on Television. Has anyone saw this program? Apparently they did a recent dive on the Wreck Site,and they presented evidence that counters Coast Guard Report. They stated online Gordon Lightfoot was going to change the lyrics of His song,to reflect their findings. Thank you all for excellent comments.