Sorry to learn of the deaths of six brave Bering Sea fishermen over the weekend on the F/V Destination in the Bering Sea. Below is an article excerpted from today’s Seattle Times newspaper.
The mystery of the crab boat’s disappearance will be debated for some time. Contrary to the opinion of some, and the perception relayed by certain TV shows, Bering Sea fishermen are, on the whole, quite professional people. They are unfortunately tarred with a brush dipped in the “cowboy” era of the ‘80’s /’90’s. But no matter what, Bering Sea crabbing is still the most hazardous job in the U.S.
The mystery in the case of the F/V Destination is why no Mayday was made, or perhaps more to the point, why no Mayday was received by another station. Bering Sea fishermen are usually quick to get on the radio when they are in trouble. In any emergency the skipper would have been on the SSB to USCG COMSTA Kodiak within seconds. The sea state was not horrendous for that time of year, but wind and waves in the Bering Sea can viciously increase and change direction in no time at all.
The peril of icing is especially significant with crab boats. Relative to other types of vessels they have relatively little reserve buoyancy and freeboard. When running to or from the crabbing grounds they have a pile of large crab pots lashed to the deck. In freezing spray the crab pots can turn into blocks of ice increasing the CG of the vessel. Here lies the mystery. A crab boat icing up and taking on a list is nothing new. The Destination’s veteran crew would have noted any listing long before it got dangerous.
If a veteran captain feels his boat taking on a dangerous list he calls the boats he is fishing with, and the USCG, to apprise them of the peril. If he feels shy about airing dirty laundry on the airwaves, he can email people ashore. But this was not done. There is a progression to things before a boat capsizes from icing. You don’t go from no-ice to capsize in seconds. It takes a while, if only a few hours. You have time to call for help. So whatever happened to the F/V Destination did so very quickly. Or the communication equipment failed all at once. The only signal off the vessel was from the EPIRB which floated free, either by manual release, or by hydrostatic release.
Some theories:
Theory 1) Lateral icing followed by wind-shift.
If a boat travels on the same course with freezing spray blowing solely on the windward side of the vessel, the boat takes on an increasing list to windward. But a strong wind can prop up the boat (remember the sail area of the crab pots. If the wind suddenly shifts direction 180 degrees in a matter of minutes (not unknown in the Alaskan waters) the boat suddenly takes on severe list to what is now the leeward, iced-up, side. Stability is already compromised by the weight of ice on deck and in the pots. If the crabpots shift from the severe list, the list intensifies down-flooding can occur through a variety of paths, and the boat sinks.

The problem with this theory is the lack of a Mayday call. The sinking still would have taken minutes, not seconds. However the lack of Maydays can be explained by thick icing on radio and satellite antennas.

If you think the “lateral icing” scenario is a stretch, I know of one 165’ vessel that very nearly capsized in 1991 in this very scenario. But given the veteran nature of the Destination’s crew, I find it hard to believe they were trapped in this scenario. Winter operations were second nature to them, and they would have known the danger of lateral icing.

Theory 2) Icing conditions combined with a very large wave breaking wheelhouse windows.
The wave would take out all communication electronics at once, and steering as well. The crew, already contending with perhaps non-critical icing at that time, would find the boat laying in the trough of the seas, continuing to ice-up, while the crew contended with multiple critical problems: loss of stability, loss of communications, loss of steering, down-flooding through the broken window, if no place else… They would manually activate the EPIRB, perhaps their only method of communication at this point. Icing would have continued to lay the boat over, and in conjunction with down-flooding the boat would have sank.
Loss of communication due to a broken window happened to a vessel I am associated with a year ago, though not in icing conditions. All comms were lost, including the GMDSS station, except for one SSB. This was on a vessel 2.5 times the size of the Destination, with much greater freeboard, though a house forward boat also. All it took was one window. So this scenario could occur. The problem is, there is usually one radio that survives, if only a waterproof handheld VHF, to make a Mayday with.
At any rate, it is sad a loss and I’m sure all our hearts go out to the families.

EXCERPTED FROM SEATTLE TIMES of 2/14/17 (with edits for length):
“The six-member crew of the Seattle-based crab boat F/V Destination had yet to begin their snow-crab harvest when the amid chilly winter temperatures in the Bering Sea off the coast of Alaska.
Michael Barcott, an attorney representing the owners of the vessel, said the crew still had all their gear on board, including the steel pots used to trap crab, when something went wrong.
“We can tell you precious little now,” Barcott said Monday. “We don’t want to speculate. … Our thoughts and our prayers are with the (crew’s families). This is a call that no fishing family wants to get.”
The Coast Guard suspended the search for the crew Monday afternoon, according to a news release late Monday.
In a statement late Monday, Barcott said the boat’s owners were grateful to the Coast Guard, good samaritan ships and residents of St. George Island who aided in the search.
“These men were professionals,” he said. “Our hearts are broken for their loved ones who are now left with the certainty of this tragic sinking.”
The missing 98½-foot crab boat sent out an emergency locator-beacon signal around 6:15 a.m. Saturday [February 11, 2017], Coast Guard spokesman Lt. Brian Dykens said. The beacons are designed to be automatically activated when a vessel goes down, providing a location for searchers.
The beacon went off about two miles northwest of St. George Island in the Pribilofs, a group of four islands about 200 miles north of Unalaska, Alaska.
A Coast Guard search has turned up the Destination’s locator EPIRB — Emergency Position Indication Radio Beacon — and a debris field containing buoys, a life ring and an oil sheen from the boat.
The Bering Sea in the winter can be treacherous, and the temperatures Saturday morning were low enough to generate freezing spray that can coat gear stacked on deck, adding weight and reducing stability. Dykens said the National Weather Service on Saturday had issued warning of conditions that would likely generate heavy freezing spray.
Pat Pletnikoff, the mayor of the town of St. George on St. George Island, said the weather in the area has been unusually cold for the past several weeks, and Saturday brought a series of squalls that, at times, created blizzard conditions.
He said that very strong tides are another hazard in the area where the Destination went missing.
“The west end of the island is known for hellacious tides,” Pletnikoff said. “Those tides can throw you around. A lot of times it doesn’t make a difference how big your vessel is … and everyone uses extreme caution when trying to transit the area.”
Whatever happened to cause the vessel to vanish appeared to happen quickly. There were no reports of any Mayday distress signals radioed by any member of the crew….
Barcott said the Destination had a “good and experienced crew” and that it “is a mystery as to what may have happened here.”
…one of the missing crew has been identified by family members as Larry O’Grady, 55, of Poulsbo. He worked as an engineer aboard the Destination.
“He has been on the boat for over 20 years, and this was his life,” said his niece, Shannon Herdman, of Bremerton.
Herdman said that the family had last heard from O’Grady in a phone call Thursday night while the vessel was in port.
Alaska fisherman Dylan Hatfield said his brother also was aboard the Destination… according to Hatfield told the Dispatch News he had worked with every member of the six-man crew and all were experienced fishermen.
The Destination is a meticulously maintained “battle ax,” said Hatfield, who worked for six years aboard the Destination, according to the Dispatch News.
Gary Painter, owner of the crab boat Trailblazer, said he has known Wilson, the owner of the Destination, for years. He described him as a good man and veteran operator in the crab fleet… The Coast Guard is expected to launch an investigation that will attempt to find out what caused the disappearance.
In many past crab-vessel accidents, a loss of vessel stability has been a significant issue. Stability can be greatly affected by what the vessel is carrying, and how that load is distributed.
The Coast Guard conducts voluntary safety checks of the crabbers to look at how many pots they carry, and ensure that they are compliance with stability instructions for their vessels.
Before the start of this year’s harvest, the Coast Guard did not conduct a voluntary compliance check of the Destination, according to Scott Wilwert, the Coast Guard’s District 17 vessel safety coordinator. But the vessel has undergone these Coast Guard checks in years past, and always found to be in compliance, he said.
Crab boats are most susceptible to capsizing when fully loaded with pots stacked on the deck. This is especially true in the winter months when icing conditions may occur, according to a 2010 safety review of the fleet submitted to the North Pacific Fishery Management Council by a then-Coast Guard officer involved in marine safety and a researcher for the National Institute for Occupational Safety and Health.
At least eight of 12 vessels lost between 1990 and 1999 were headed to the crab grounds, or returning, in a fully loaded condition, according to the analysis…”

This article draws upon the expertise of a man who is a brother and crewmate to the the men who were lost. He broadly agrees with your ideas, freighterman. The story also puts into perspective how much safer crabbing is now than it was in the 90s, and therefore how statistically significant this loss is. 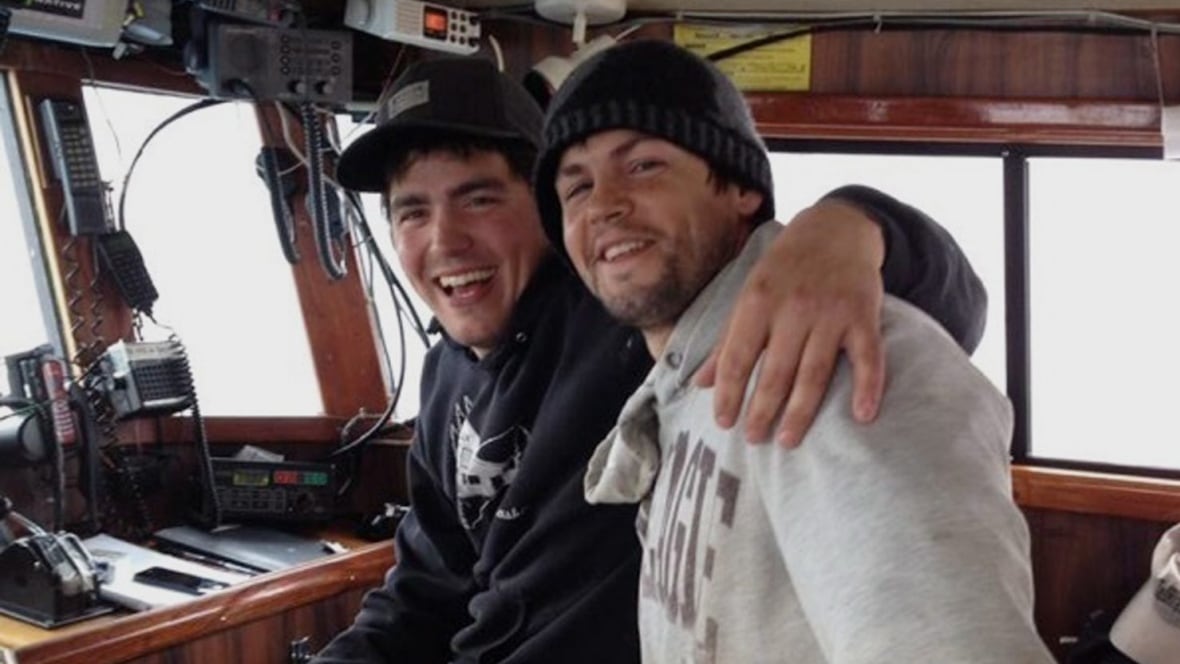 Dylan Hatfield got one last chance to see his brother and five other crewmen on the Destination, a 30-metre crab boat, days before the vessel went missing and presumed sunk in the Bering Sea.