Shell Oil has run into a number of problems with its Arctic drilling plans over the last few days. The Coast Guard refused to certify its oil spill containment barge as it stands, the EPA is reviewing the Noble Discoverer drill rig’s air permits – and now, there may be damage to the rig itself.
The Noble Discoverer appears to have run aground in Unalaska on Saturday afternoon.
Despite rain and 35-knot winds, more than a dozen residents came to Airport Beach to watch the Shell’s contract tugboat Lauren Foss straining to pull the rig back out to sea.
Longshoreman David Howard was one of the onlookers. Howard says he noticed something wrong with the 500-foot rig earlier in the afternoon.
“I’m just like anybody else driving by, you see it getting closer and closer, you know it’s dragging anchor and that they probably ought to get a tug on it.”
Howard says he thinks the Shell crew got lucky.
“Fortunately, where it got grounded, it was pretty soft in here,” he says. "There’s not a big bunch of sharp rocks out there. It’s fortunate to have gone up here rather than out on the S-curves, where there’s a lot of rocky areas that might compromise the hull."
Shell Alaska spokesman Curtis Smith says the company has activated a dive team to inspect the hull, which could help determine whether the ship actually touched bottom.
Shell is also evaluating the Noble Discoverer’s mooring system to determine how the vessel moved toward shore, he says. But Smith did not say that the ship had run aground.
“Today, while moored off the coast of Dutch Harbor, the Noble Discoverer drill ship drifted toward land and stopped very near the coast,” he says.
The Coast Guard is also investigating the incident.
The Noble Discoverer has been in Unalaska since last Saturday, along with a flotilla of support vessels. It’s supposed to begin drilling in the Chukchi Sea next month.
Another link
http://www.adn.com/2012/07/14/2542598/shell-drill-ship-drifts-near-shore.html

oh there is so much I would say at such a moment as this but only will ask which genious of a master was aboard at the time?

ah such a fine display of skills and local knowledge. I have to wonder if the captain had ever been in Dutch before?

Good God, this is the last kind of publicity they need. Maybe Lucy Lawless sabotaged the anchor?

I have to wonder if the captain had ever been in Dutch before?

Doubtful, since not that many have. 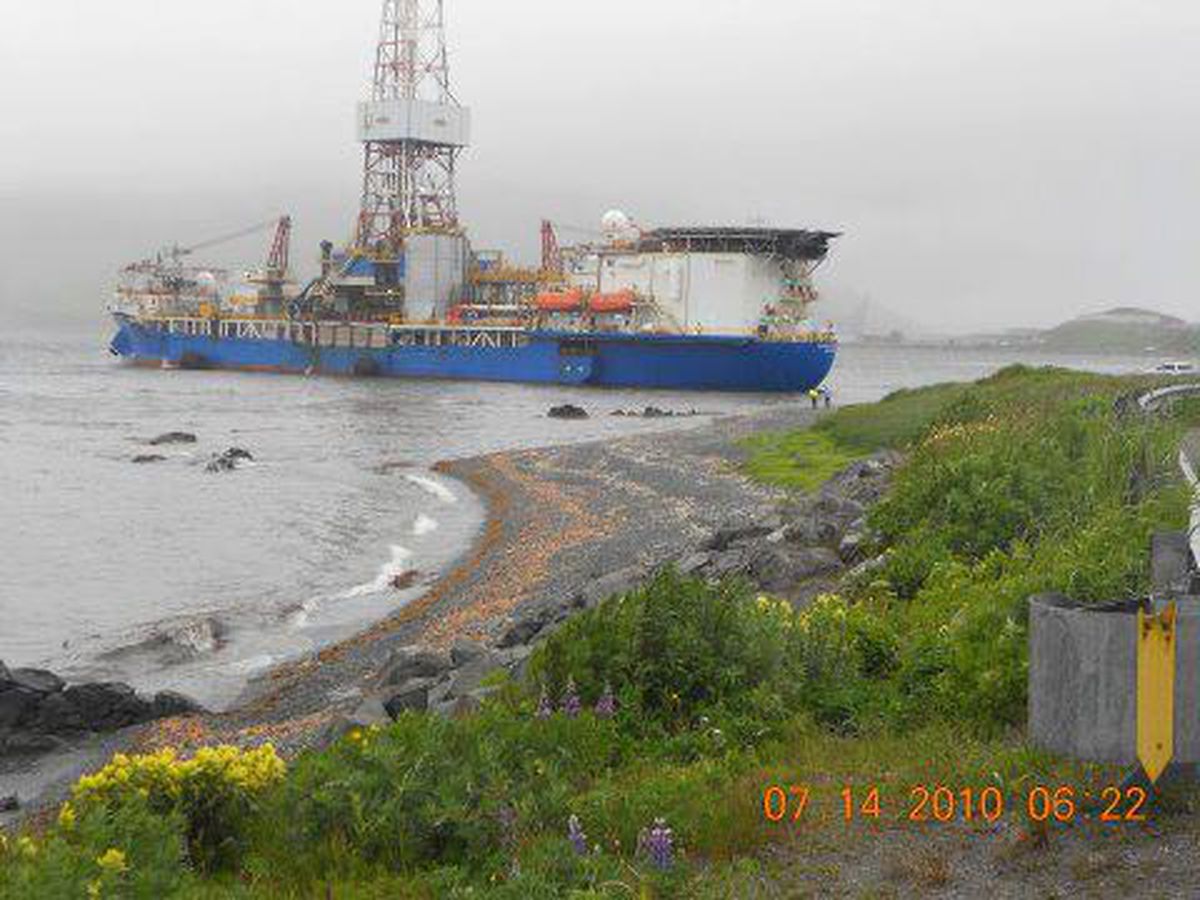 The Shell drill ship Noble Discoverer dragged anchor and came very near shore in the Aleutian city of Unalaska on Saturday.

The photo is self explanatory

Oops, guess everyone was asleep.

I cannot agree with you more Fraqrat, Sadly, in this case I am not going to go off like I did when Xena scaled the derrick in New Plymouth much as I want to…believe me I do. Again this is a plain and clear failure of the master to exercise common sense and competent judgement. I’ll say no more than that and await further details to be released.

Royal Dutch Shell’s hopes to drill in Alaska’s Arctic this summer have been hitting some hurdles lately, with potential problems arising with air permits, a hiccup over an oil-spill containment barge docked in Washington state and now, the drill ship Noble Discoverer came unexpectedly close to shore Saturday in Unalaska Bay on its eventual trek to the Arctic.

It was not immediately clear if the vessel had actually run aground.

Unalaska radio station KUCB reports that the Noble Discoverer began drifting toward shore sometime Saturday afternoon. A longshoreman quoted in the story said that he observed the vessel as neared shore and appeared to be dragging its anchor.

KUCB reported that the Noble Discoverer “appears to have run aground in Unalaska on Saturday afternoon,” and the Dutch Harbor Telegraph said that the vessel bumped into the beach.

However, the official report from the Coast Guard Saturday night estimated the vessel only came within 100 yards of shore, according to a spokeswoman. Photos posted to KUCB’s Facebook page from Unalaska locals would seem to indicate the vessel came closer than that.

Shell Spokesman Curtis Smith, in a statement, also didn’t say that the ship ran aground, but rather “stopped very near the coast,” before it had to be pulled back out by a tug.

Below is Smith’s full statement:

Today, while moored off the coast of Dutch Harbor, the Noble Discoverer drill ship drifted toward land and stopped very near the coast. One of Shell’s vessels, the Lauren Foss, then safely towed the Discoverer to its prior mooring position, and the ship’s engines were started. Shell personnel are now evaluating the ship’s mooring system to determine why the vessel moved closer to shore. As a precaution, we have activated a dive team to inspect the drill ship.

Smith added that inspection was to begin immediately. The Coast Guard is also looking into the incident.

According to U.S. Coast Guard spokeswoman Sarah Francis, the dive team is expected to arrive in Dutch Harbor within the next day or so.

“We are not aware of any injuries, pollution, or damage to the vessel at this time,” Francis said.

She said that the Noble Discoverer drifted to about 175 yards offshore in the vicinity of Hog Island, in an area that she understood to have a soft seabed. The official report from the Dutch Harbor Command Center later revised that estimate to 100 yards from shore.

The wind was blowing at about 35 mph, which may have contributed to the anchor coming dislodged, she said.

“We received a report at about 5:18 p.m. that the anchor let go and they were traveling toward shore,” Francis said. “They took quick action with the assistance of tugs to redirect and move the vessel away from shore.”

She added that it didn’t immediately appear that the vessel had run aground, and personnel aboard the ship didn’t report feeling any impact. She said that the Coast Guard can now see the vessel from the office in Dutch Harbor, and would continue to monitor the situation.

She said that the vessel is now anchored further offshore, and may move to the Coast Guard pier for the inspection to take place.

I’ll say no more at present…

Well they had one…now didn’t they?

now the question remains, is the rudder bent? How can it not be?

I’m not a deck guy so maybe I’m confused. When you set anchor don’t you usually use VRM or EBL on your radar to judge distance from a fixed object. Isn’t this an easy way to judge how you will swing or if you are dragging. I can’t believe no one on the bridge didn’t notice they were dragging. They left with an armada you mean to tell me they didn’t have one towing vessel on standby. There has to be more to it than somebody just had an “oopsie”. It baffles me that there could be this sort of breakdown in just basic seamanship. They also had to know that every friggin anti oil hippie in the world is watching them.

Wonder what took the tug so long to get to them they were the ones who towed the thing up there.

now the question remains, is the rudder bent? How can it not be?

Yeah that’s definitely closer than the reported 100 yards. You could wade out in chest deep water to probably touch that bent rudder. He should have consulted his Chapmans on how to set his scope right.

One would think that with the future of the Arctic offshore oil leasing program on the line — that Shell would be sparing no expense and availing themselves of every reasonable precaution available. Instead they start out with this rookie mistake that showcases their incompetence.

I fear that Shell has just done more harm to the future of Arctic offshore drilling than Greenpeace could ever dream of.

[QUOTE=Fraqrat;74708]I’m not a deck guy so maybe I’m confused. When you set anchor don’t you usually use VRM or EBL on your radar to judge distance from a fixed object. Isn’t this an easy way to judge how you will swing or if you are dragging. I can’t believe no one on the bridge didn’t notice they were dragging. They left with an armada you mean to tell me they didn’t have one towing vessel on standby. There has to be more to it than somebody just had an “oopsie”. It baffles me that there could be this sort of breakdown in just basic seamanship. They also had to know that every friggin anti oil hippie in the world is watching them.[/QUOTE]

It’s a repeat of Port Aranaki with Lucy Lawless. How can such simple precautions as following a VSP or maintaining a proper anchor watch be so dismissed? I’ll tell you how…a master who is a boob!

remember also the DISCO ended up having a major weather incident in New Zealand which caused them to wreck their anchoring winches and fairleads and caused them to drop the LMRP on the seafloor and then end up in a shipyard in Brisbane for I don’t know how many months. Failure upon failure and who is at the epicenter of all this?

I know I am breaking my pledge but you will notice how the media is lapping up the Shell spin this morning claiming that the DISCO did not ground!

the photos tell all…The bottom there is fairly steep so the hull likely isn’t, but she is aground on the stern, most likely sitting on the skeg. If it is bent, the rudder can not longer be used and there is no drydock closer that Seattle or Esquimalt. Will the USCG allow the ship to operate as purely a barge? I suspect they will because Shell is in too deep now!

I can understand why Shell might choose the KULLIUK to drill in the arctic, but why would they choose an old ship like the DISCO?

Where’s the Commodore when you need him?

[QUOTE=tugsailor;74722]I can understand why Shell might choose the KULLIUK to drill in the arctic, but why would they choose an old ship like the DISCO?[/QUOTE]

Damned good question other that she does have an ice class hull and turret mooring plus that Shell has pumped at least $200M into her over the past three years (first in the Philippines in 2009/10, then in Australia (2011/12) and the in Seattle this spring. What they should have done is to have actually completed at least on of the two Bully drillships to be a true Arctic capable ship but that won’t happen now they are done. It would take less time and cost less to just go back and try again with a pure arctic design this time. I figured if Shell did come back with a big play up there this season they’d announce that they would be building a rig just for the arctic and that is would be along the lines of the KULLUK just much bigger. You really don’t want a ship shape in pack ice unless you can freely pivot on the moorings to meet the direction of the flow. A round rig can just sit there and let the ice just pass on by. All you need is lots of highly capable ice management vessels which Shell is obviously willing to pay for.