Again Mario…I cannot thank you enough for your clearheaded reporting on this tragedy!

Hansen and HMS Bounty Organization Sued for $90 Million
By Mario Vittone On May 12, 2013

The official USCG and NTSB reports on the sinking of Bounty aren’t out yet. Even so, the lawyers for Claudene Christian’s mother (also named Claudene) felt they had more than enough to bring suit against owner Robert Hansen and the HMS Bounty Organization. On April 6th, attorney Ralph Mellusi filed a lawsuit on behalf of Claudene Christian who is seeking a total of ninety million dollars for the wrongful death of her daughter. Citing Hansen’s knowledge of the rotted frames, the general disrepair of Bounty, the relative inexperience of the crew he employed , his decision to allow Bounty to sail from New London at all along with Walbridge’s actions during the voyage, the complaint calls the trip into Hurricane Sandy “…the greatest mismatch between a vessel and a peril of the sea that would ever occur or could ever be imagined.”

The complaint alleges twenty-nine separate acts of “negligence, gross negligence, willful, callous and reckless conduct” by Hansen and the HMS Bounty Organization that directly led to Claudene Christian’s death. These allegations range from the mismanagement of repairs and alterations to the reckless actions that occurred during Bounty’s last days. There were the obvious ignored warnings about the approaching storm. There were warnings from shipyard personnel about the condition of the ship. There were even warnings from members of the crew that were ignored. After leaving New London, Bounty suffered numerous mechanical and structural failures and actually began flooding on Saturday, yet Walbridge made no mention of any trouble to anyone until late Sunday night. When he finally did, he included the phrase, “We are not in danger tonight.” This statement allegedly led to confusion and delayed Coast Guard response.

Included in the complaint are several passages from emails sent from Walbridge to Hansen and Tracy Simonin. Mellusi uses them to make the point that Walbridge – despite his years of experience aboard Bounty – “lacked a level of professional knowledge and experience which would even allow him to appreciate the imminent danger awaiting BOUNTY and her crew.”

(The phrase “actually headed to the dangerous side of it” is only slightly less absurd than, “Hoping like a deer…it won’t be there.”)
bounty course sandy chart 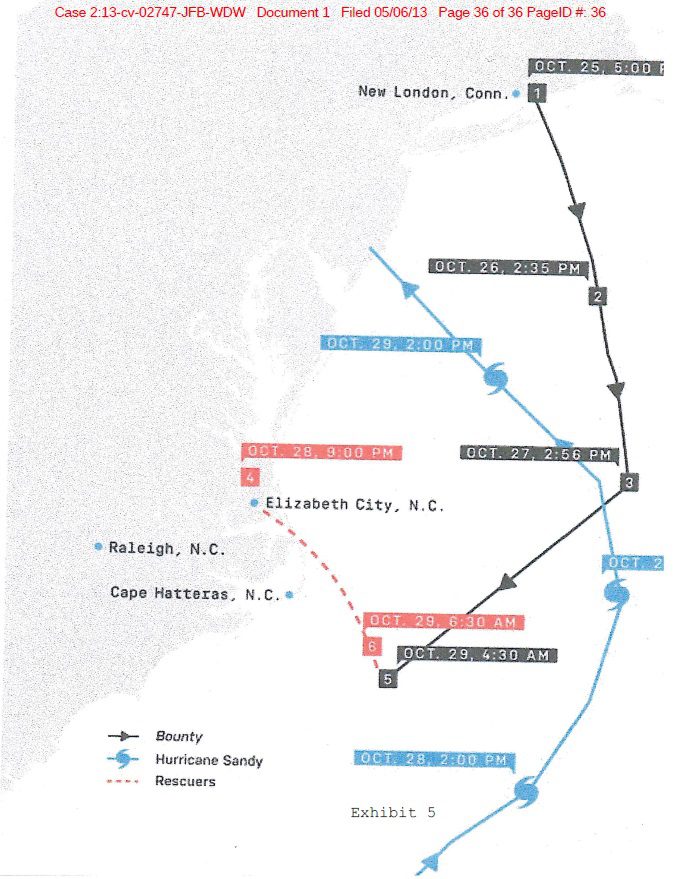 Exhibit5.jpg673×879
The chart [above] – included as Exhibit 5 – shows that Walbridge’s hope was misplaced.

A full reading of the complaint contains surprises even for those who followed the public hearings back in February. There are charts derived from testimony that depict the sailing experience aboard Bounty at the time of her sinking. With only sixteen persons aboard, Bounty was sailing short by any reasonable measure. But if Hansen intends to argue that the crew was sufficient, the charts alone settle that argument before it begins:

It is doubtful, though, that Hansen will argue at all. Hansen, owner of the multi-million dollar IslandAire, has a lot to lose and almost nothing to gain by taking this all the way to court. He would have to explain why it was so important to get his ship to Florida by early November; he would have to defend why Bounty was in disrepair, or deny he knew it was; he would have to sit in front of a jury and try to make sense of the senseless. That could only end badly. No, I don’t believe Robert Hansen is going to let this case go to court.

It would be the legal equivalent of sailing a leaking old ship into a hurricane.

Thank you, Mario Vittone, for reporting on this. Thank you for all of the work you have done on this sad story.