Raving words of lunacy from a craven COWARD! 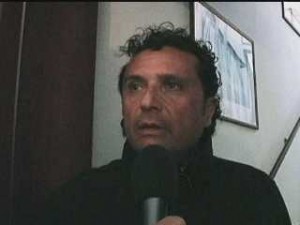 Captain Francesco Schettino has some balls… that is if you don’t count the night he allegedly abandoned ship after running the Costa Concordia aground.

Italian media reported Wednesday that Schettino, captain of the infamous Costa Concordia, has sued the ship’s owner, Costa Crociere, over his dismissal and has demanded he get his job back WITH back pay.

In the suit, Schettino argues that although he was in charge when the ship ran aground during the risky “saluting” maneuver, he actually saved many lives when he decided to steer the Costa Concordia closer to land, where it still rests today. Schettino says that many more lives would have been lost on the night of January 13 had he not made the decision to maneuver the sinking vessel back to Giglio, and for that he should not have been fired.

Italian media actually reported today that Schettino was in fact fired from Costa Crociere back in July, confirming what most people already expected, or at least hoped.

“Costa Crociere confirms that it has concluded the disciplinary procedure against Schettino following the Costa Concordia shipwreck, ordering his dismissal,” the company told the Italian media.

Schettino is currently under house arrest and is awaiting a decision expected next week that will determine whether or not he will go to trial on charges of abandoning ship, manslaughter, and failing to communicate with maritime authorities.

32 of the more than 4,200 people on board the Costa Concordia died in the incident.

I want to go take this MURDERING CRIMINAL and lock him into a vessel being scuttled far offshore. He should have to face the same TERROR his passengers faced that night while he was so courageously “rescuing” them! FUCK THIS ASSHOLE!

They must not have an Italian version of Nancy Grace. If they did he would be getting a nightly beat down in the press. He should be using all of his house arrest free time to be digging a hole in his yard to bury himself.