Can anybody here name this engine type?: 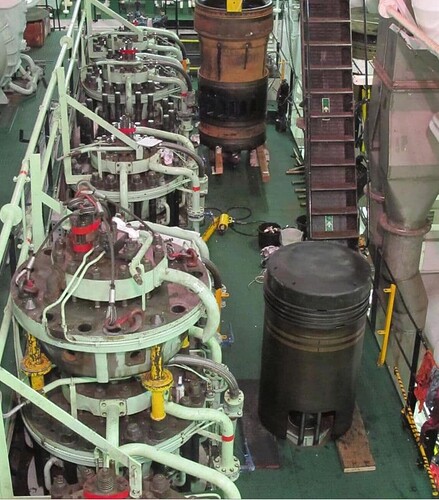 Agree with the RND series ID. Looks like a piston and/or liner change in progress.

Couple things here… Pretty cool to have some spacers to allow one removed cylinder cover to be stored on top of an installed one to save floor space.

Second, I find the length of the liner to be weirdly short. The piston is almost as tall as the liner!

Lastly, I heard that these ships would sail with an intentional port list of a couple of degrees to offset the side thrust from the charge air and thus minimize uneven liner wear. Can anybody confirm that?

I think it was a slight stbd list. I’m pretty sure we were wearing out the port side of the skirts, but it’s also been almost 15 years since I’ve worked on an RND.

It was strange to me when I switched over to MAN powered vessels. The liners seemed much taller while the piston & skirts were really short in comparison.

Storing the cover on another cylinder was handy but it did make for some sketchiness when cleaning the cover. You didn’t have great access for wire wheeling which encouraged the wirewheeling to be done with the cover suspended from the crane.

Also, on the piston you can see the two piston cooling water pipes through the notch in the skirt. These were on the port side. There was an window that allowed inspection while the engine was running.

Nice, simple engine. The reed valves were kind of a pain, especially for the junior officers.

I’ve got a couple of broken off ends sitting in my box of stupid crap I brought home from work. Someday I’ll get a lathe and actually start making stuff out of that box

Recycling is a good thing. 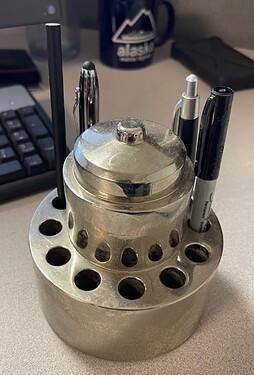 Another question for Engineers;
What do you think of this idea?: 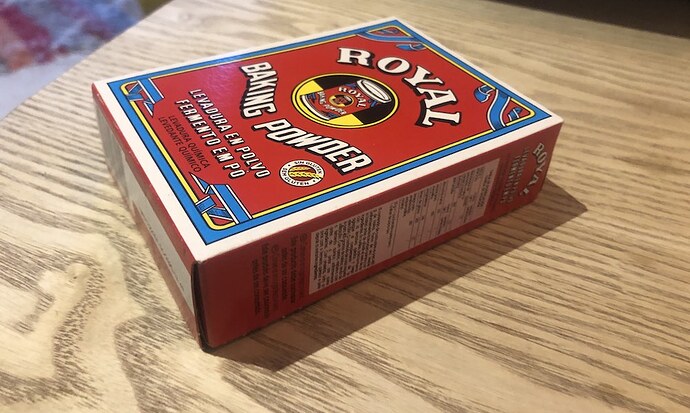 Sodium bicarbonate, a substance best known for its baking qualities, has emerged as a new scrubber solution.  London-based SodaFlexx has created a concept to treat exhaust gas emissions from ships with sodium bicarbonate powder. The concept was...

I’ve been wanting the lower part of a liner for a while, cut off about 8" above the scav ports. I think it’d make a pretty cool fire ring for the backyard. Problem is getting it home…

Another question for Engineers;
What do you think of this idea?:

Coal power plants have been using limestone slurry mixes in their scrubbers for ever. It’s nothing new, but on shore they have a lot more space for entire water treatment plant.

Diesel engines eat too many parts and require too much maintenence. Wish all the steam ships weren’t gone.

Going to the webpage of the company shown in the OP’s article, it looks to me like this system is a replacement for the normal wet style EGCS, that is, there is no water to treat.

I did a Google search for IMO approval for this type of dry system (which would be required before you could burn >0.5% sulfur fuel) and didn’t find anything.

Perhaps this is used in conjunction with a wet system? That is, the wet scrubbing gets the CO2/SO2 ratio partially down (resulting in less contaminated/acidic water going over the side), then the dry part of the system treats the gas to get the ratio down to the final level to meet the requirements of whichever mode (0.5-global or 0.1-ECA) you’re in?

Hard to sneak it into the sea bag. Oh, crap, I am dating myself.

feeding the intake some soda to score the walls and seat rings has been around a while, just don’t really overdo it !!!

It was Bon Ami cleaning powder. It was mostly limestone dust and feldspar.

Ya, i saw some fast seating with that.

I did a Google search for IMO approval for this type of dry system (which would be required before you could burn >0.5% sulfur fuel) and didn’t find anything.

Can’t speak on the IMO at sea stuff, but dry type systems did exist on shore for smaller applications. “smaller” would be ship size, as “normal” is 200-400MW and big is 500-1000MW. It’s was a cloud of limestone dust that the flue gas went through.

Know this type of engines?: