The answer to the quiz proposed to @johnny.dollar, which remains unanswered, is quite an important one and may resonate with some of the deck officers and Masters on these boards. 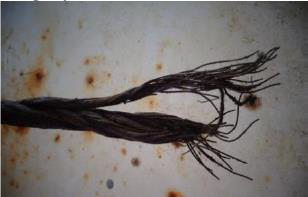 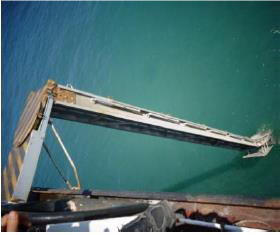 On three occasions during Pilotage, whilst the crew were either breaking out or housing the gangway, the falls have failed and the gangway has ended up dragging in the water (similar to the photo). This necessitated the stopping and stabilisation of the vessel in the channel whilst the gangway was retrieved using chain blocks and/or the stores crane. This same incident also occurred with other Pilots.

From that point onward, any slung/ unsupported accommodation gangway that could not be landed whilst alongside the berth had to be fitted with a tensioned chain preventer bridle in addition to the tensioned falls.

Now back to this picture……. 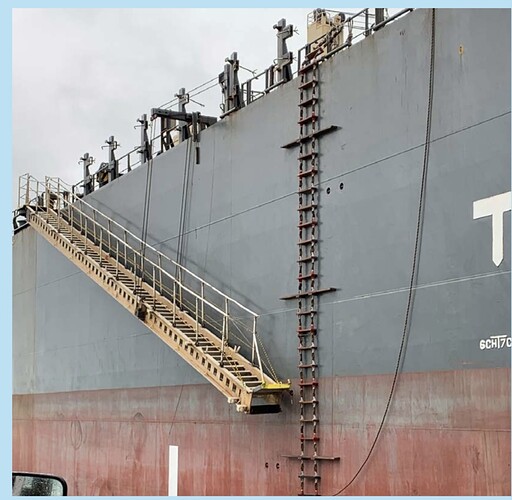 Prior to transferring to the gangway from the Pilot ladder I used my forward facing foot to tramp very heavily on the landing platform to test both the platform pinning and falls. I always felt very exposed walking up that long gangway and kept a firm grip on the ropes at all times in anticipation of the whole show disappearing from beneath me.

The only saving grace was the fact that the helicopter covered the majority of these transfers.

First of all i feel very sorry for the pilot 's family horrible.

But was reading this with great interest and my opinion is as a sailor for more than 20 years plus.

Having of had more ten 1000’s of pilots on board, being in almost any port in Europe including Humber river numerous times.

First off al we should get (how hard it may sound to al lot of people) rid of the pilots on board in my experience. 70% if not more of the pilots worldwide are absolutely not knowing what they are doing and heaps of them totally depended on their tablet with navigation software.

In some cases some ports i understand you should need a pilot but these are very rare, i most cases a shore bases pilot should be more then sufficient[, like being used in Ijmuiden the Netherlands.

I know there are vessels with incompetent crew that would need a pilot in some cases or with very large vessels in combination with tugs which do not speak the language. But in this case we should increase the competency of crew or ban certain vessels (flags) from ports.

But like the Humber it’s all about the tablet with latest updates, why not let the vessels that come there al lot get one of these and auto update them before arrival. It’s not so difficult.

I will tell you one thing and that’s it it not about safety or environment otherwise things would be changed a long time ago. it’s all about the money. Ports get money when pilots are involved and the pilotage is extremely expensive. there are nowadays so much alternatives with a good shore based communication etc. i know it’s not going to change because to much people in the right spots will never allow to slowing proceed to make pilots go away and change over to more effective ways of getting vessels into ports. For instance in the Netherlands they just changed the pilotage laws( 2 years ago) by now even with smaller vessels being compulsory to take a pilot. also al the strange rules in every port for getting a pilot exemption are over the top, Again all about the money. For instance Denmark is very easy and even with bigger vessels it’s not always compulsory to take a pilot and they have some tricky ports.

Are there more accidents there ? i do not think so.? i have had so much times i needed to take over from a pilot because otherwise we would have a (near) accident.

I know a lot of people really do not like what i am saying, but also a lot of experienced sailors know i am right. It’s all about the money. Also a lot of Sailors like myself do not complain about pilots directly and just play the horrible game again every time. This is because the pilots just for no reason start complaining to port authorities and vessels and crew no it doesn’t help to complain. For instance I the Netherlands a survey was held about complaints about pilots and there were almost none I am sure it’s is not about good pilotage it’s about not wanting any trouble. Now back to the pilotladders of course they should be good, but 9 out of the 10 times it’s the pilot boat that breaks them. Also really and I know everyone knows recognizes this. A pilotboat comes along side and they start saying via VHF is the pilot ladder rigged according the regulations bla blab la so VTS can hear them. Later the Vessel is moored and the taxi for the pilot is waiting on the key.

The pilot in 90% of the times not waits for the gangway but just jumps of to go home quick. It’s all about the money…

The answer to the quiz proposed to @johnny.dollar, which remains unanswered, is quite an important one and may resonate with some of the deck officers and Masters on these boards.

Brah, nobody cares! It was some irrelevant quiz trying to prove some sort of superiority of whatever it is that you do. Is that how you improve the world, randomly quiz people on esoteric knowledge that is not relevant at all to the original problem trying to be solved? Again, watch the TedTalk video I posted.

Only you (not I) have claimed to be an expert on gangway and ladder arrangements. Which is funny, because you are far from an expert. Have you ever taken a basic design course? Statics, material properties, primary school physics class…let alone more advance design theory?

You drive ships. You have two inputs you control: Rudder Position and Throttle position. That is your expertise—maybe try to stick to it.

No, but it does imply that North P&I Club is not too keen on remote pilotage though.
Which is what I implied:

Apparently the P&I Club is not too keen:

I’m not terribly bright but pretty sure you and North implied nothing. You expressed your views. I was attempting to pay some respect to the subject of Hornblower’s OP.

Let me express my take on the North article. Pilot fatalities are acceptable risks. Alternatives such as remote piloting are unacceptable.

I was attempting to pay some respect to the subject of Hornblower’s OP.

In that case you should link to the OP.
But you are correct on at least one point in your last post.

Could you pls tell me why remote pilotage is not acceptable?