I had the idea that Sikling was perhaps the sender’s name. It’s quite consistent so not a typo.

Yes, could well be. The Croatian captain’s name was Dino Miškić, but maybe in these circumstances he delegated the messaging to one of the other crew members. 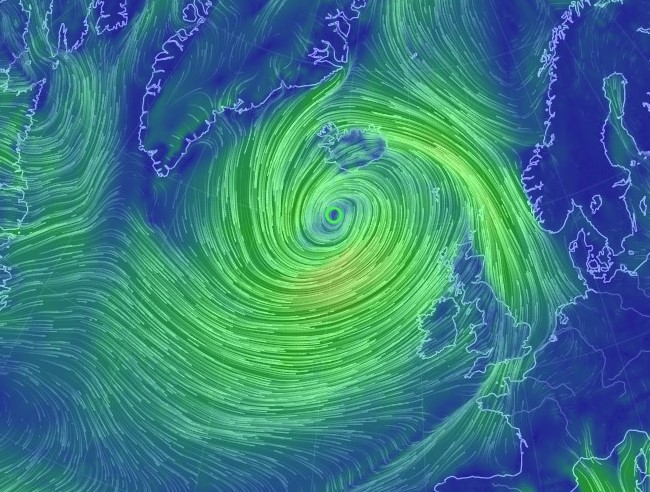 It’s quite consistent so not a typo.

Or a typo carried over by a cut and paste type operation. The text editors I’ve seen on emergency comms tend to be on the primitive side.

In any case the meaning is not changed very much either way.

These are the specs: Double azimuth stern drive tug NEMED

That makes a lot more sense.

^^Along with being ~18 meters longer, twice the power, much more accommodation capacity, deck space and load capacity etc.

To me, she looks like she was carefully prepared, all rusty spots largely cleaned… ready to get painted.

What I see in that picture is a bunch of rust spots on the freeboard that were knocked back (with a 3M wheel?) for painting. It makes me think someone said “make her look presentable”, which is materially different from the ever so tangentially related “make sure she’s sound”.

What I also see in that picture is a suspicious looking brown sheen under the waterline. If that’s what I think it is, then she’s well overdue for blasting down to the plate and re-coating. I’m not saying that it wasn’t done after the picture was taken, but who in their right mind doesn’t hit the freeboard when they’re at it? Neither am I saying that I know what I’m looking at, I’m just speculating…

Not familiar with Azimuth propeller systems, don’t know how likely something there might have opened up.

Plate adjacent to drives and other skin penetrations are prime corrosion sites, due to the different alloys involved.

It is unknown where the ship sprung a leak, but it probably was not a big one as after the first report at 08.58 UTC (‘Water in engine room’), the last report was at 12.05 UTC (‘Water increasing’). That is a time difference of a little over 3 hours.

I suppose that the free surface effect of the sea water in the engine room, which is very detrimental to the ship’s stability, in combination with the 10 m waves sealed the fate of the vessel. To add to this she also would have been riding the giant waves broadsided. To be adrift for 3 hours in these circumstances is a horrifying thought.

To add to this she also would have been riding the giant waves broadsided.

I wonder how many say one-meter parachutes strung along her 350 meters of wire from the fo’c’sle drum it would take to make a difference, and what the cube would be stowed. Would take an interesting machine to apply them as the wire went out, or a bunch of people with nothing better to do. And I guess they’d need power on the drum, or a big parachute they could heave over the side to start pulling the wire out.

A heavy duty sea anchor deployed from the bow might have been helpful but it’s not something normally carried on that type of vessel AFAIK.

I realize that for most mariners the tactic of keeping the ship’s head into the seas is gospel but I don’t necessarily think that’s true in all cases.

In a heavy confused sea near the eye wall how much can a vessel improve it’s situation by heading up into the wind? Not as cut and dried as assumed I don’t think. In some cases I would think the benefits would be marginal at best.

Lying hull-to is a recognized heavy-weather tactic and I have been in 14-16 meters sea (measured by satellite) with the engine stopped.

Another picture (undated) of the Bourbon Rhode drydocked. (Lifted from Vesseltracker): 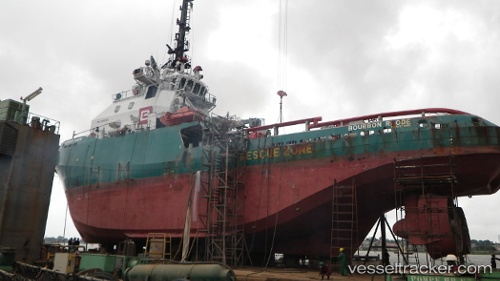 I bet, they will dig into the dry-dock protocols, searching the reasons for the sudden water ingress. 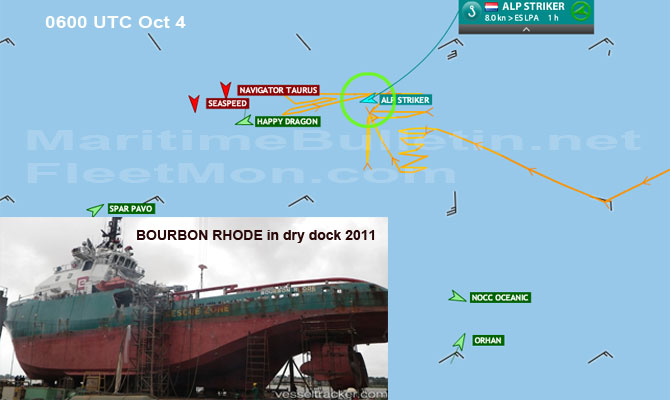 This is from the Maritime Bulletin in this post.

I agree wth Captain Kennebec that lying head to wind and sea in the very confused seas found near the eye may not work. The Asian squid boats use a large parachute style sea anchor deployed of their forward bitts with a tripping wire from the anchor windlass. Aft there is a twin boom arrangement with a small trysail mounted off each to keep the head to wind. The arrangement works up to gale force but the hull shape is different.
Here I think there were several things in play. Free surface and large amounts of water on the back deck which can result in G moving aft as B moves forward due to the buoyancy of the forward section resulting in a catastrophic loss of stability.

On the majority of offshore vessels there’s an escape hatch on one quarter and sometimes a rope locker hatch on the other quarter. These were my first thoughts of access for water when I read about water coming in aft.

I think differentiating between gale force and hurricane force winds strengths is crucial. No sea anchor or any other piece of gear that I know of is designed or capable of saving the day if in the clutches of a hurricane with no propulsion. Dumping oil to coat the surface has been used in the past with some success.
In 10 m extremely confused seas a sea anchor might help but with a waterlogged settling stern and the effects of free surface, it could make things worse by jerking the bow around and accelerating any ongoing structural damage or tearing the drum or bollard out of the forward deck.
There’s a saying in aviation, “When all else fails, assume a fetal position and standby to kiss your ass goodbye.”
I’ve gotten to the first part of that saying twice. Once, in the air, figuratively when the end seemed inevitable but pulled through without having to kiss my ass goodbye and once at sea, literally jammed into a galley settee to prevent getting tossed and making it through before having to suit up.

Too true which is why I said up to gale force.