I think differentiating between gale force and hurricane force winds strengths is crucial. No sea anchor or any other piece of gear that I know of is designed or capable of saving the day if in the clutches of a hurricane with no propulsion. Dumping oil to coat the surface has been used in the past with some success.
In 10 m extremely confused seas a sea anchor might help but with a waterlogged settling stern and the effects of free surface, it could make things worse by jerking the bow around and accelerating any ongoing structural damage or tearing the drum or bollard out of the forward deck.
There’s a saying in aviation, “When all else fails, assume a fetal position and standby to kiss your ass goodbye.”
I’ve gotten to the first part of that saying twice. Once, in the air, figuratively when the end seemed inevitable but pulled through without having to kiss my ass goodbye and once at sea, literally jammed into a galley settee to prevent getting tossed and making it through before having to suit up.

Too true which is why I said up to gale force.

More than likely laid up (and poss de-classed) until a new contract appears then heh presto! Into drydock for paint job and class work to the required standard. Nothing to suggest that Bourbon are a fly by night company…

I think we need to differentiate between an F12 hurricane force wind and a hurricane, one is high speed wind (and wave) and the other is a TRS system. As I’ve said before European skippers may not have the knowledge or experience of TRSs therefore will make mistakes.

I think that the reason many mariners automatically associate DIW with beam to the seas with heavy synchronous rolling is because when it happens it’s very memorable.

It has been reported that when the wind reaches hurricane speed and the seas become confused, some ships ride out the storm best if the engines are stopped, and the vessel is left to seek its own position, or lie ahull. In this way, it is said, the ship rides with the storm instead of fighting against it

In a mid-latitude storms likely it will lead to a worse situation for the ship in most cases, but I think that statements or assumptions about loss of propulsion in heavy weather need to be qualified a bit more than they typically are, especially in a TRS.

The question for me is how do you test this? I’ll try any number of headings and speeds in heavy seas to find one that eases the ship best, but stopping the engine to try this method could just as easily put the ship into a catastrophic roll that shears cargo off the deck. I’m familiar with the method I just don’t think I’d have the stones to try it for the first time unless forced to do so by losing the plant.

I’m going to stick with thoroughly watching the weather and staying as far as possible from danger.

It’s always easier to run away.

Depending on vessel design it may be safer, but easy? Have you tried running away from it when wavelength approaches LWL?

Some boats handle it OK, but mostly the tiny, nimble ones. One night I’ll never forget I ran a 100 footer ahead of a 7m chop. We were in constant danger of broaching, and I ran the steering gear so hard I was afraid of overheating the fluid. Easy is not a word that comes to mind, ask a small craft guy.

Some boats definitely feel safer when pointed downwind, especially the ones that have more freeboard aft. I was going to mention it earlier, but my heavy weather experience doesn’t extend beyond the North Atlantic on a properly fucked up day (which is awesome in the most literal sense), and I understand that we’re talking about a different beast here.

EDIT: It just dawned on me that you might have been referring to running away from as in “escaping” rather than running with the weather…

You just have to enough time to run away. If you wait to long it’s tough to run.

Yes, vents have check-valves (stainless steel balls) to prevent the intake of water. But they need to be tested regularly. Rookie stuff? Apparently not for the officers of the Aiviq .

Yeah… you’re blaming the wrong people on that one. The fuel tank vents were originally down on the freeboard deck (like on all GOM anchor handlers and OSV’s) on an anchor handler with a very wet deck to begin with. I’ve worked with 99% of the crew that was on there during that “incident” and I can assure you that “checking the vents regularly” was not the point of failure on that one…

To be clear I do not recommend that a ship be steered into the eye wall of a hurricane and the engine shut down.

Hurricanes should be avoided, not controversial in my view.

This is my point:

I think that statements or assumptions about loss of propulsion in heavy weather need to be qualified a bit more than they typically are, especially in a TRS. 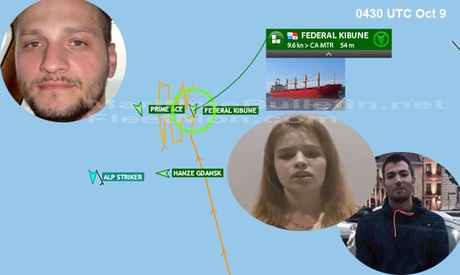 BOURBON RHODE Oct 9 UPDATE: SAR has been resumed, though at a much less scale. SAR was resumed after a surge of ...

Agree. The USCG did a investigation on the Aviq. It was not complementary. The problems went beyond check valves in vents.

Following from my earlier musing on investigations, I note that still there has been no announcement (that I can find, at least) from:-
USCG as Navarea IV coordinator, nor
CAM/Luxembourg as Flag state, nor
BEA-Mer/France as IMO SAR Regoin coordinator and country of (beneficial) ownership.
However BEA-Mer has already announced, within 24hrs, its enquiry into the Rhodanos grounding in Corsica.
Odd!

Just stumbled across this, dated 08 Nov…
"…Technical investigations are starting and we are working with all stakeholders to understand the facts and circumstances of this tragedy. Analysis and verification of these facts will take time… "
See - https://bourbon-offshore-greenmar.mu/en/offshore/bourbon-rhode-crew

I took basically the same route in December 2016. November was the first month highest it was considered safe for small boats.
I was surprised how bad the weather was, with rain showers, heavy grey clouds and squally winds almost every day.
Seas were also much rougher than expected with 3 well defined swells from NE, E, SE.
This made for confused seas and big corkscrew pitch and roll about every 8 minutes for three weeks.
Every time I am sitting safely in port I wonder why i did not test some of my survival tactics. In large part because when conditions are bad enough to consider it, if the boat is handling it ok, I don’t want to mess with what I have.
I still wonder though.

On this same trip, I did something stupid which did necessitate lying a hull for 20 minutes while i replaced my rudder hydraulic hose.
My Kadey Krogen just bobs in those circumstances (10 to 20 ft seas)

why i did not test some of my survival tactics

Sorry, I was responding to Damn Yankees comment:
" The question for me is how do you test this? I’ll try any number of headings and speeds in heavy seas to find one that eases the ship best, but stopping the engine to try this method could just as easily put the ship into a catastrophic roll that shears cargo off the deck. I’m familiar with the method I just don’t think I’d have the stones to try it for the first time unless forced to do so by losing the plant.

I’m going to stick with thoroughly watching the weather and staying as far as possible from danger."

I see, missed that. Hard to predict how a ship and also a yacht, will behave with no engine power. It depends on a number of factors such as hull design for instance L/B ratio, stability under present loading conditions --> GM, deck cargo, sail of the superstructure and of course the wind, wave and swell conditions. I suppose that most well balanced ships could ride it out, like a seagull sitting on the water as we say.