Now to build some of these in the USA!

doesn’t IHC Merwede have a JV with Alabama Drydock to build their designs in the US? Let’s get going you guys! 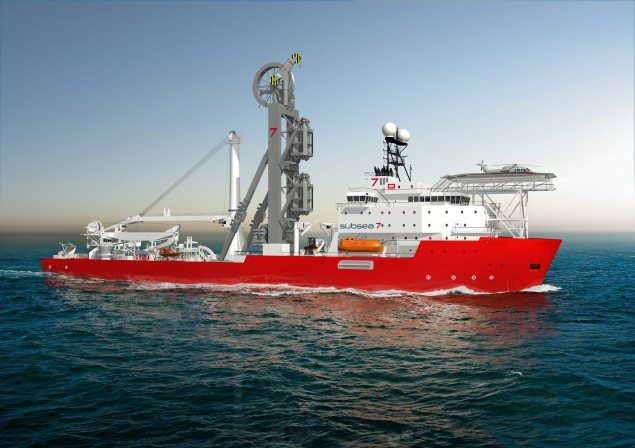 IHC Merwede announced today over €1 billion in new orders have just been received for the design, engineering and construction of six, 550-ton pipelay vessels. The orders consist of three vessels each for Subsea 7 and Seabras Sapura, the partnership between SapuraKencana and Seadrill.

On board the vessels ordered by Seabras Sapura, IHC Merwede will be supplying a twin-tensioner tilting lay tower, two below-deck baskets and support equipment for the loading, spooling and routing of products. The integrated automation system, full electrical installation and electrical machinery package will also be designed and delivered by IHC Merwede. In addition, IHC Merwede will provide pipelaying simulatory training for Seabras Sapura personnel.

IHC Merwede’s newbuild tally for Subsea 7 now stands at 8 vessels with this latest order, and these new ships will be of identical design to the recently launched Seven Waves. With an overall length of 146 metres, a beam of 30 metres and a Class-2 dynamic positioning system, these vessels will be equipped for transporting and installing flexible flowlines and umbilicals in water depths of up to 3,000 meters.

All six vessels will be built at IHC Merwede’s extensive, state-of-the-art shipbuilding facilities in The Netherlands and will be delivered in the period between the first half of 2015 and the second half of 2016.

“IHC Merwede is delighted to confirm this major order worth over €1 billion for six more pipelaying vessels that are destined to join four other ships – currently being worked on by IHC Merwede from a previous order last year – in Brazilian waters for Petrobras,” says IHC Merwede’s new COO Bram Roelse. “We invest in long-term partnerships with our customers to achieve the best possible solutions. This announcement also highlights the success of a key part of IHC Merwede’s ongoing strategy to offer completely integrated vessels to its customers.”