Most Extreme Rogue Wave on record

In November of 2020, a freak wave came out of the blue, lifting a lonesome buoy off the coast of British Columbia 17.6 meters high (58 feet).

Somewhat confusing because this wave is 'only" 17 meters but while the Draupner wave was 25.6 meters in a 12 meter sea this was was 3 times larger than the sea at the time

" In oceanography, rogue waves are more precisely defined as waves whose height is more than twice the significant wave height (H s or SWH), which is itself defined as the mean of the largest third of waves in a wave record. Therefore, rogue waves are not necessarily the biggest waves found on the water; they are, rather, unusually large waves for a given sea state."

HSC operate on Significant Wave Height; ours use 3.5 metres.
A ‘significant’ wave is the average of the 3 highest waves; this could mean wave heights between 3.4 metres and 3.6 metres.
Or between 2.5 metres and 4.5 metres.
It wasn’t the 2.5 metre one that forced the bone outside of the old ladies leg instead of the inside where it was quite happy.
Operations department deciding that numbers are definitive and pressuring the Old Man to sail.
I did hear once that the significant wave height on HSC was determined to be the maximum that an MES would stay attached once launched, but have never had it corroborated.

The scientist described the rogue wave as “once in a millenium.” I should be retired before the next one, then. Statistics are comforting.

The scientist described the rogue wave as “once in a millenium.” I should be retired before the next one, then. Statistics are comforting.

Each year on the post marks a “100-year” flood at Great Falls of the Potomac River: 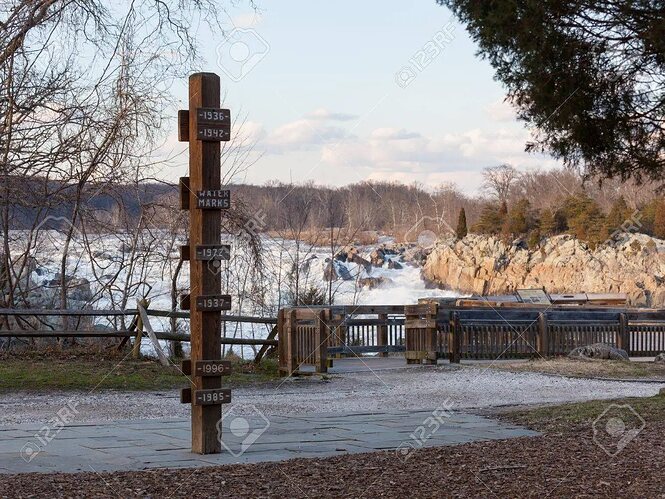 Hey at least the flooding went down!

I was on a team that measured waves in excess of 90 ft. during Hurricane Ivan in the GOM in 2004. They weren’t “rogue waves” just the significant wave height to be expected in a cat 5 hurricane at that water depth.

The concept of significant wave height (SWH) itself is interesting. The internet says weather buoys were first used in WWII and Walter Munk came up with SWH at about the same time.

Wave buoys can use methods like RMS which is not useful to mariners but from which SWH can be determined. Munk sort of reversed engineered the problem and created SWH instead of applying a correction to determine a more accurate (but less useful) average.

Wasn’t there a ship that measured a swell by eyeball using the forward mast? I don’t recall the name of the ship.

On 7 February 1933, while cruising across the Pacific Ocean from Manila to San Diego, the ship encountered the tallest rogue wave ever recorded at the time, measuring 34 metres (112 ft) in height.[1] 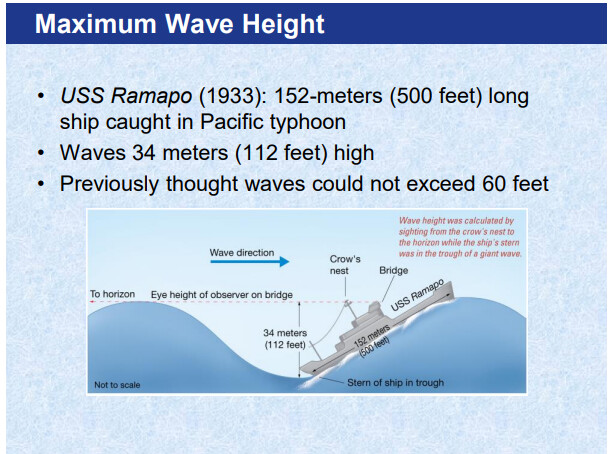