Just when you think your life at sea sucks

it suddenly is a whole lot better when you read about these poor pathetic SODS stuck on this miserable pile!

Old US ship home to Filipinos in China standoff 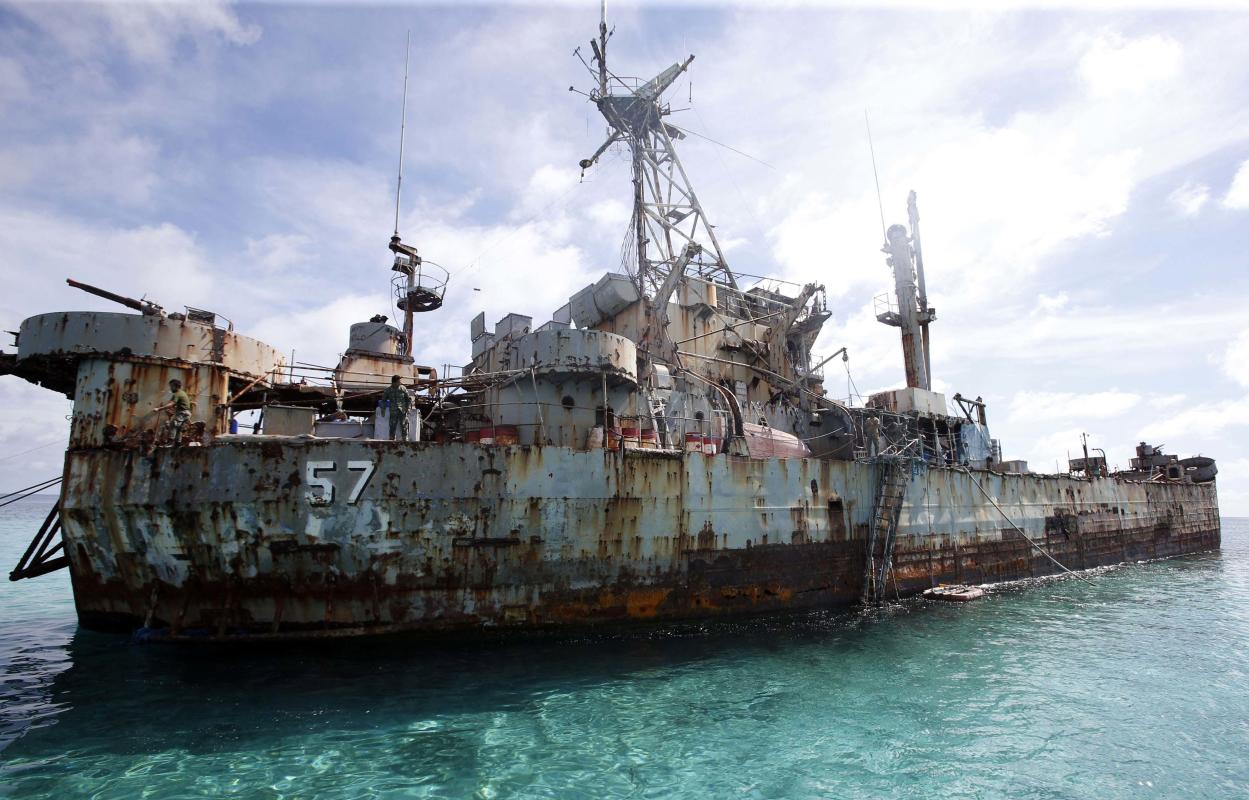 ABOARD BRP SIERRA MADRE, Spratly Islands (AP) — On board the crumbling carcass of this World War II-era warship, Filipino marine 1st Lt. Mike Pelotera and his eight men make their way to a mid-level deck to raise the Philippine flag up a leaning pole and then salute it. Across the calm, turquoise waters, two Chinese coast guard ships lurk, looking on.

Its hull riddled with holes and rust, the BRP Sierra Madre has become a fragile symbol of the Philippines’ claim to Second Thomas Shoal, an eight-kilometer (five-mile) -long submerged coral outcrop that has been disputed by China and the Philippines for years.

It’s a lonely ship, where Pelotera and his team wage a daily battle against isolation.

“There’s a point where you tend to feel low,” Pelotera said of the challenges of his team’s four-month deployment at the reef, where there is no land to stand on and nothing to stare at all day but sea. “But we have to kill the boredom because there is an important mission to fulfill.”

The Philippine navy inherited the former U.S. tank-landing ship USS Harnett County in 1976, and ran it deliberately aground at Second Thomas Shoal in 1999.

A Chinese frigate and maritime surveillance ships arrived last year to press China’s claim to the shoal, which is believed to be sitting atop undersea oil and gas reserves. The move was an example of China’s increasing assertiveness in the South China Sea, something that is alarming the United States, Manila’s longtime ally.

Analysts say China’s strategy is to slowly take possession of islands and outcrops in the South China Sea, using intimidation where necessary but avoiding any major confrontation. Its military might and economic dominance in the region mean it can push its weight around with little fear.

Second Thomas Shoal and the nearby Spratly Islands lie about 120 miles (190 kilometers) from the western Philippine province of Palawan, and about 700 miles (more than 1,000 kilometers) from southern China. China’s foreign ministry says Beijing has “indisputable sovereignty” over the shoal.

The Sierra Madre is now effectively a shipwreck, but the Philippine military has not decommissioned it. This makes the ship an extension of the government and means any attack on the ship is tantamount to an assault against the Philippines. The Chinese ships are around 5 miles (8 kilometers) from the outpost, clearly visible to those on board.

When Associated Press journalists and other members of the media were allowed to board the ship over the weekend, the marines went about their day, washing dishes and giving the visitors a short tour. The slow strain of Kid Rock’s late 1990’s song “Only God Knows” played from an old stereo set.

“We’re marines,” Pelotera said in an interview. “We can adapt to life anywhere.”

Another marine, Cpl. Sheffrey Luna, said people should look beyond the ship’s disrepair.

“They should see the determination of the soldiers in it,” he said. “If you’re not determined here, where everything you see is water, you won’t last long.”

In the last 15 years, the Sierra Madre has slowly crumbled, beaten by the sun, sea and storms.

Its main deck, used as a helipad before, is now home to an upturned lifeboat and toppled iron poles. Doors and wooden scraps cover holes and weak deck sections that could collapse and hurl a marine down into the cavernous cargo hold. Its towering mast is heavily rusted and could be toppled by the next big storm.

Three weeks ago, the Chinese succeeded in blocking for the first time a Philippine boat bringing troops and supplies to the Sierra Madre.

Manila deployed a civilian boat last week with a fresh batch of marines and 10 tons of food. In a bid to draw global attention to what Philippine officials have called China’s bullying tactics, they invited more than a dozen journalists, TV cameramen and photographers to come along on the 30-hour-plus journey from the Philippine mainland.

Two Chinese coast guard ships tried to block the slow-moving vessel, with one cutting dangerously through the Philippine boat’s path twice. The Chinese coast guard warned the boat by radio to turn back, saying it was illegally venturing into Chinese territory. The Chinese ships blew their horns continuously, but the boat maneuvered toward a shallow approach to the shoal dotted with submerged rocky outcrops, preventing the Chinese from continuing.

Carl Thayer, a professor at the University of New South Wales and an expert on the dispute, said China is trying to wear the Philippines down. “China is mainly motivated to squelch the Philippines and its vocal and legal opposition to Chinese assertiveness, less this inspire other regional states to do the same,” Thayer said. “Bit by bit, China hopes to condition regional states into accepting its hegemony.”

Philippine navy Lt. Ferdinand Gato, who led the resupply mission, smiled as the boat approached the Sierra Madre, with the outgoing marines, some of them sporting beards, waving and smiling on the deck. He had served as a gunnery officer of the warship during military campaigns against Muslim insurgents and Abu Sayyaf extremists in the mid-1990s.

A regional military commander, Lt. Gen. Roy Deveraturda, awarded Pelotera and his men with bronze cross medals Monday for their work on the Sierra Madre.

“You can now shave and have a haircut,” he told the marines.

He said he was heartened when he asked each of them if they were willing to return to the Philippine ship on the shoal. “They told me, ‘anytime, sir.’”

reminds me a lot of some of the foul fish processors I worked on in Alaska in the very bad old daze!

anyway, since they are so bored out there, why don’t they do a bit of chipping and painting of the pig? afterall it is sovereign Phillipines Territory they are serving on. I guess they must spend all of their time singing karaoke and doing other unmentionable acts out there where no one can hear their screams!

I wonder if those twin 40mm Bofors still fire? would love to have those to mount in the bed of the mighty M54!

Do they get time and a half sea-time for their unlimited chief-mate upgrade?

HAHA! I already have forgotten the username of our esteemed drillship “SECOND MATE UNLIMITED” and how wonderful it would be if we could stick him on this not-floating pile for six months as chief mate. How ultimately fitting for a whiner like himself!

[QUOTE=z-drive;134262]Do they get time and a half sea-time for their unlimited chief-mate upgrade?[/QUOTE]
and time for the new Bayou DP ticket