I swear these companies do this to just one up eachother 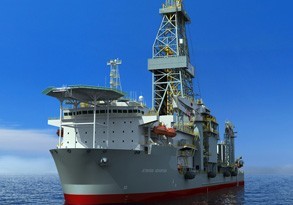 Just hours after announcing a 3-year contract with Noble for its newbuild Atwood Advantage drillship, Houston-based Atwood Oceanics, Inc. (NYSE: ATW) says that it has entered into a contract with Daewoo Shipbuilding and Marine Engineering Co., Ltd. (“DSME”) for the construction of a third ultra-deepwater drillship at the DSME yard in South Korea. The drillship, to be named Atwood Admiral, is expected to be delivered by March 31, 2015 at a total cost of approximately $635 million.

The design of the Atwood Admiral will be identical to the previously ordered Atwood Advantage and Atwood Achiever – all three are DP-3 dynamically-positioned, dual derrick ultra-deepwater drillships rated to operate in water depths up to 12,000 feet and drill to a depth of up to 40,000 feet. The Atwood Admiral will also offer two seven-ram BOPs, three 100-ton knuckle boom cranes, a 165-ton active heave “tree-running” knuckle boom crane, and accommodations for up to 200 persons.

Rob Saltiel, the company’s President and CEO, commented, “We are pleased to continue our growth strategy through the exercising of our option with DSME shipyard, and we look forward to the Atwood Admiral joining our high-specification, ultra-deepwater drilling fleet. This rig’s state-of-the-art capabilities, and the synergies that result from adding a third drillship based on the same design, make this a solid platform for extending Atwood’s market position in ultra-deepwater drilling.”

Today’s order was placed on an option that was set to expire on September 30, 2012 and, in connection with the exercise, the company has also secured an option to construct a fourth ultra-deepwater drillship at a similar cost to the Atwood Admiral and with an expected delivery in December 2015, which requires commitment by June 30, 2013.

Upon delivery, the Atwood Admiral will become the sixteenth mobile offshore drilling unit owned by the company.

Headquartered in Houston, Texas, Atwood Oceanics, Inc. is an international offshore drilling contractor engaged in the drilling and completion of exploratory and developmental oil and gas wells. The company currently owns 11 mobile offshore drilling units and is constructing three ultra-deepwater drillships and two high-specification jackups. The company was founded in 1968 and is traded on the New York Stock Exchange under the symbol “ATW.”

[QUOTE=c.captain;83971]I really do have to update that list of vessels on order…[/QUOTE]

[QUOTE=captmrb;83972]Transocean sealed the deal with Shell this morning for 4 more too…[/QUOTE]

This is NOT good news for Noble Drilling…

ZUG, SWITZERLAND–(Marketwire - Sep 28, 2012) - Transocean Ltd. (NYSE: RIG) (SIX: RIGN) today announced that it has been awarded 10-year contracts for four newbuild dynamically positioned ultra-deepwater drillships by Royal Dutch Shell (Shell). Shipyard delivery for the first drillship is scheduled for mid-2015. The remaining three drillships are expected to be delivered from the shipyard at approximately six-month intervals thereafter. After customer acceptance, the contracts are expected to commence in 2015 and 2016, contributing an estimated revenue backlog of $7.6 billion, excluding mobilization. The aggregate capital investment for the four newbuild rigs is an estimated $3.0 billion, excluding capitalized interest.

All four drillships have advanced capabilities: each is designed to operate in water depths of up to 12,000 feet and drill wells to 40,000 feet. Featuring state-of-the-art equipment, including Transocean’s patented dual-activity drilling technology, the newbuild drillships will possess industry-leading hoisting capacity. The drillships will also have a variable deckload capacity of 23,000 metric tons and feature enhanced well completion capabilities. In addition, each newbuild rig will be outfitted with two 15,000 psi blowout preventers (BOPs), which are expected to reduce customer non-productive time between wells. The four newbuild drillships will be able to accommodate a future upgrade to a 20,000 psi BOP, when it becomes available. The rigs will also feature diesel engines configured to comply with anticipated Tier III International Maritime Organization (IMO) emissions standards.

“These contracts add 40 years of rig work to our revenue backlog, expand and upgrade our ultra-deepwater fleet, improve our fleet mix and provide an opportunity to expand our relationship with an important customer with which we have 40 years of experience in advancing the state of the art in offshore drilling technology,” said Steven L. Newman, President and Chief Executive Officer of Transocean Ltd. “We look forward to providing Shell with incremental value through the addition of these seventh-generation, ultra-deepwater drillships.”

Peter Sharpe, Shell’s Executive Vice President, Wells, said, “Shell continues to develop its deepwater operations and modernize its contracted rig fleet at fair market rates. These state-of-the-art deepwater rigs, on which we are collaborating with Transocean to design, will comply with the highest industry standards for safety, operations and environmental protection for drilling deepwater wells.”

The newbuild rigs will be constructed at the Daewoo Shipbuilding and Marine Engineering Co., Ltd. facility at Okpo, South Korea, where Transocean’s five Enhanced Enterprise-Class rigs were built and where the company currently has two other ultra-deepwater drillships under construction. Construction on the first drillship is expected to commence during the fourth quarter of 2013.

[QUOTE=c.captain;83973]This is NOT good news for Noble Drilling…

Indeed! The question his how many of these newbuilds are headed to the GoM? That’s where us American mariners will be needed. What’s your intelligence say?

I would say 50% of all newbuild drillships will end up in the GOM. Then followed by Brazil, then West Africa, then East Africa, then everywhere else. Anyone, with experience, should be smart and negotiate everything possible into their contract (signing bonus, retention bonus, pay, travel, etc…) For now, its our market and as DP UDW guys we need to keep them on their toes.

[QUOTE=Skoidat69;84063]I heard a rumor that Seadrill is taking over Transoceans’s BP job at the end of contracts and PDC is doing the same with TO’s Chevron contracts…[/QUOTE]

Interesting rumor, which contracts are you referring to?

Interesting rumor, which contracts are you referring to?