How come no discussion about this latest US flag attempted piracy incident?

I would think this would have been on here by now? I saw it a couple of days ago myself but forgot to post it then. 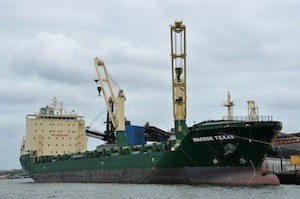 Lots of rumors were flying around maritime circles this morning of a rather involved pirate attack on the U.S.-flagged Maersk Texas today in the Gulf of Oman. In the end the attack was thwarted by a shipboard security team, but we heard rumors of up to 20 skiffs were involved in the attack and also that ALL the skiffs were actually just local fisherman.

As it turns out, however, the vessel was attacked and most of the rumors were not in fact true.

Reaching out to Maersk Line, Limited, which is the jones act arm of Maersk and owner of the Maersk Texas, the company confirmed the attack and offered gCaptain the following statement on the incident:

[quote]Maersk Line, Limited confirms its U.S. flag vessel, Maersk Texas, thwarted an attack by multiple pirate skiffs at noon local while transiting the Gulf of Oman, northeast of Fujairah. All hands onboard are safe and unharmed, and the vessel is proceeding on its voyage. Numerous skiffs with armed men in each boat quickly closed on Maersk Texas. Maersk Texas activated defensive measures per the U.S. Coast Guard-approved Vessel Security Plan. Despite clear warning signals, the skiffs continued their direct line toward Maersk Texas and the embarked security team fired warning shots. The pirates then fired upon Maersk Texas, and the security team returned fire per established U.S. Coast Guard rules of engagement. Many small craft and fishing boats were in the area and were not involved in the incident.

Maersk Line, Limited reportedly employs Trident Group security teams onboard their vessels, the same group shown in a viral video shooting “warning shots”at approaching pirate skiffs. If it was a Trident team on the vessel, we know there is some video of the attack that will likely be reviewed, and up to Maersk on whether or not it will be released.

MAERSK TEXAS is currently sailing from Shuaiba, Kuwait to Beaumont, Texas, according to the Maersk-Linie website.

UPDATE: The U.S. Office of Naval Intelligence has just released a warning for the area of the attack on the Maersk Texas. The warning does not mention the attack specifically, but warns of some odd behavior by skiffs in the area, possibly indicating a new pirate tactic that could address some of the rumors we heard previously of the Maersk Texas attack.

Merchant vessels operating in the Gulf of Oman, Gulf of Aden, Arabian Sea, Persian Gulf, Red Sea, and Somali Basin are advised to maintain vigilance against and report abnormal or atypical small boat behavior, to include potential surveillance. This includes merchant vessels at anchorage either in or near territorial waters. Merchant vessels are encouraged to differentiate between fishing vessels from potential bad actors intertwining themselves within legitimate fishing activity. If fishing gear or actual fishing activity is not observed, take all appropriate counter-piracy and force protection measures to prevent piracy, illegal boardings, and/or waterborne attacks. In accordance with Best Management Practices (BMP), please maintain communications with UKMTO and report any abnormal incidents.

Follow up reports on the incident indicate that the Maersk Texas was assisted by an Iranian warship immediately following the attack, as well as later by the Australian frigate HMAS Melbourne.

The MAERSK TEXAS is one of two newly built multi-purpose dry cargo ships – the other is the MAERSK ILLINOIS – that the MLL acquired in September 2011 to sail for Maersk-Rickmers U.S. Flag Project Carrier, or Maersk-Rickmers for short, a company established to provide U.S. customers with heavy-lift breakbulk and project cargo shipping requiring U.S. flag service.[/QUOTE]

Now, if they were carrying DoD cargo, weren’t they supposed to have a military security detachment aboard? What else could they be carrying between Kuwait and Beaumont? Sounds like the security contractor Trident Group wanting big $$$ and probably lobbying against having the US Army aboard doing what it should be doing already! I bet Maersk gets to bill the cost of these guys back to the government with a healthy markup too boot! WTF! Is Blackwater (sorry “XE”) involved in this rip off of the taxpayers?

It will be interesting to see if it was pissed off fisherman, pirates OR just Iranians messing with a US flagged vessel… I have been chased by Iranian revolutionary navy guards in zodiac (summer 07). What will be more interesting is the bill from Maersk for the security team. They probably were charged $1000-1500 per man/ day but told uncle Sam $3k…

Sent from my iPhone using gCaptain