Hello, Everybody I’ve been reading gcaptain for awhile, it’s nice to have somewhere to get all the scuttle butt on the happenings of our industry. Has anybody heard of HR bill 2651, the maritime workforce development act? I read about in it “Workboat” several months ago. The bill is supposed to provide loans for mariners to pay school tuitions and other fees. Mariners would be able to borrow up $60K over the course of their career (limited to $15k per year). Each loan would have a pay back period of 10yrs. Does anyone have additional input??? Thanks.

It hasnt passed yet 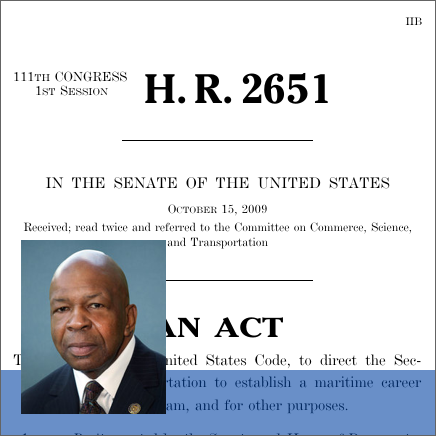 To amend title 46, United States Code, to direct the Secretary of Transportation to establish a maritime career training loan program, and for other purposes.

Status:
Introduced Jun 2, 2009
Referred to Committee View Committee Assignments
Reported by Committee Jun 4, 2009
Passed House Oct 14, 2009
Senate Vote …
Signed by President …
This bill has been passed in the House. The bill now goes on to be voted on in the Senate. Keep in mind that debate may be taking place on a companion bill in the Senate, rather than on this particular bill. [Last Updated: Nov 13, 2009 9:34PM]
Last Action:
Oct 15, 2009: Received in the Senate and Read twice and referred to the Committee on Commerce, Science, and Transportation.

Votes:
Oct 14, 2009: This bill passed in the House of Representatives by voice vote. A record of each representative’s position was not kept.

This bill has been incorporated in HR 3619 which is the Coast Guard Reauthorization for 2010. There are several goodies that are very popular to states and industry, so the Senate might actually take this one on. A new Coast Guard Icebreaker, taking the limit off OSV tonnage, and the Mariner Loan Program is included.

Thanks for the input. I hope it passes the senate. I have got a bunch of classes I need to take!

[QUOTE=BH Dually;21669]Thanks for the input. I hope it passes the senate. I have got a bunch of classes I need to take![/QUOTE]

Some schools like PMI and MITAGS currently offer low cost loans through Sallie Mae, or at least they did - I’m pretty sure. Might be worth checking out.

track what they have on this…
http://www.govtrack.us/users/events.xpd?monitors=bill:h111-2651

One wonders if Obama’s discretionary spending freeze will hose this bill.